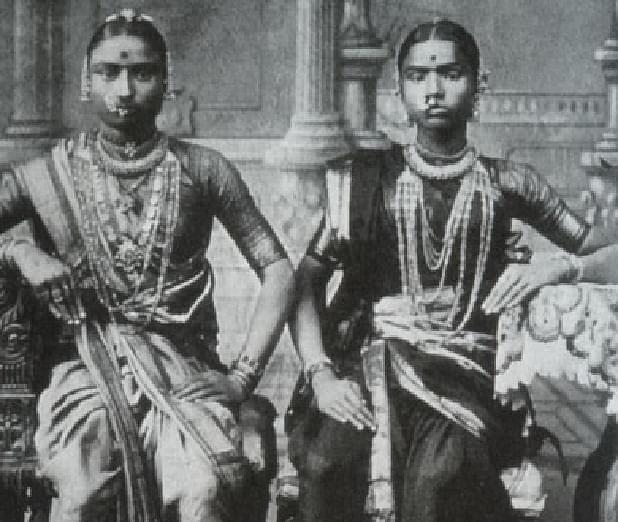 Once considered auspicious members of society, these ladies were the final word at making a work of art famous!

The Nautch Girl. Mistress of the Gods (and the priest). The courtesans. The haute prostitutes.

Let’s face it, when it comes to Devdasis, our perception of them has curiously been as jaded as it was when Europeans first arrived in India. On seeing these breathtakingly beautiful girls sing and dance in temples, these Europeans called them “nautch-girls”. It was the first time that a term was used, and understandably so, for the European mind back then, a dancing girl who showed off her body could be nothing more than an entertainer performing for the pleasures of the rich and the famous. Back then the king, of course and not the Lord! The whole idea of art as an offering to God was alien to them. This in spite of the fact that the Devdasis custom was some 6000 year old, and prevalent in ancient Rome, Egypt, Sri Lanka and Indonesia too!

In fact, in 1892, an appeal was made to the Viceroy and Governor General of India and to the Governor of Madras, where for the first time Devdasis were mentioned as such:

There exists in the Indian community a class of women community commonly known as nautch-girls. And that these women are invariably prostitutes.

Apparently the appeal was made by an organisation called the “Hindu Social Reforms Associations” and was a part of a so-called reform called the Anti-nautch Movement. And while the Governor of Mysore along with the Viceroy vehemently denied to be a part of such a revolution, the demeaning process continued till finally thanks to the political and economic change, Devdasis – once a revered member of the society – were brought down to become the nautch girl, and a prostitute eventually.

Yet, if one has to look back in time when Egyptian temples survived and the earlier periods of ancient India, no such references were made. Back in time, and we are talking about as old as 6AD, Devdasis enjoyed the same power as the head priest or some of the senior courtiers. They could influence the king, and ask for mercy for the hardened criminals if they thought it was suitable. The peace emissary of any kingdom, they were perhaps the most well-travelled members of the royal court.

In fact, it was customary in those days to invite Devdasis to every festivity in well-to-do families for singing devotional songs and for dancing. Old Sangam literature and Kalinga panjis (old ledgers) often referred them as auspicious members of the society, who had mastered the art of con controlling the five senses and hence called Mahari in a few places.

It was a common tradition to have a bead from Devdasis’s necklace for the mangalsutra of any bride. The bead was a symbol of fertility and understanding in a relationship. And while it is true that they were called upon to dance at religious functions and festive occasions, Devdasis, at least till the Chalukyas, were never members who had to depend on the society for their well-being.

The Devdasis were often the only members who could amass properties, and were often counted among the rich and powerful, mostly patronized by the queens, who had little else to spend their wealth on. An early example of the queen’s generosity is the Muktiswara temple. Built by Queen Dharmamadevi, wife of the Pallava King Nandiwarman II, the temple contains an inscription (the first of its kind in South India), detailing the names of fourteen ladies dedicated to the temple as dancers. These Devdasis dedicated themselves to the service of God, including singing and dancing during the temple festivals.

Such was the pride of being a Devdasi back then that often women from royal families would opt for that path as it allowed freedom of speech and action –and a chance to be immortalized. The figurines in most of the temples in the South and Konark in Odisha in fact have had some of the most beautiful Devdasis model for them. Folklore has it that the legendary poet Jaydev too had to visit many Devadsis before his Gita Govinda – the book known for its eroticism – became famous. Saint Chaitanayadev, yet another scholar from Odisha- in fact took the aid of Devdasis for his various compositions to get popular. Of course, in his later years, the scholar introduced his new style of presenting dance plays, for which Devdasis from across different kingdoms would show their interest in. He also made Gita Govinda popular by ensuring that the Devdasis at the Jagannath temple sang only the verses from the popular love book.

It wouldn’t be wrong to assume that Devdasis were the first actor and actresses of the Indian stage. The popular Odisha dance, Gotipua, which though performed by men playing both the genders, was initially conceived by the Devdasis. In South, especially in the erstwhile state of Andhra, from where Chodagandeva called in the dancers to perform at the Natya Mandir in the Jagannath temple, Devdasis were the members who popularized literature. A popular folklore has it that when the first book on Mahabharat was written in Tamil, the author, was asked to sought the help of a Devdasi who would recite his verses in a recital for it to gain acceptance.

So how did the Devdasi system begin?

The first reference to a Devdasi is found when Queen Kolavati of Keshari dynasty (6th century A.D.) dedicated a collection of handpicked Devdasis to the Brahmeswar temple. This ritual was followed at the Meghaswar and Sovaneswar temple too. But it was only when King Chodagangadev completed the construction of the Jagannath temple and added Devdasis in the 36 categories of workers to serve Lord Jagannath, that the whole idea of Devadasis came into being. Of course back then, they were allotted land (‘Chudangasahi’) for their living. Divided into Dutta, Hruta, Bikrita, Bhrutya, Alankara and Gopika or Rudraganika, the status of a Devdasi was decided into the society – so while a Dutta was considered high on the pedestal along with Alankara, the Bikrita (girl sold to be a devdasi) was considered the lowest, and would often be given responsibilities outside the temple. They were the ones who were called by families to dance at different occasion or bless a new born, as the inside temple Devdasis were tied to the temple work.

And while the society accepted them with mixed feelings – they were yet not considered prostitutes who were, according to Kamasutra and Buddhist text dating 300BC, refer to as Ganikas or Nagar-Vadhu. Essentially, public women or brides of the community, these women were so beautiful that they were made available to the public to avoid issues. Perhaps the wealthiest women in the society, who had house and wealth and land, they were experts in 64 different form of art, which included music, dance and cooking and witty conversation. Remember Amrapali and Upagupta, anyone? It is said that their expertise were often sought out to write literature especially those pertaining to music and food. Manasollasa, the earliest existing culinary masterpiece, too had such courtesans who were involved in the cooking and presentation of the dishes.

Clearly, between the Devdasis and Ganikas, they had able critics who decided which was the art form that would survive and made popular, and were valued in the society for the same. Such was the legend of these supremely gifted ladies that often they were called in by different kings to perform at their temples and give their literature a new lease of life. It was their unique offering that led to the evolution of court dances and plays like Kathakali.

So how did the whole change of image happen?

Fascinatingly, the fall of Devdasis came in two halves: First, with the fall of the kings that patronized them. In Odisha, it was 1150 AD with the rise of Sultan Shah. With the kingdom going into unrest again and temples getting destroyed, many Devdasis were rendered jobless. Without the temple to take care of the many, the ones on the lower level took to dancing in courts of smaller kings and at homes of the rich and famous. That many historians believe was the start of the downfall of one of the most intellectual caste of the society. With them at easy access, the respect soon abated, though many kept that healthy distance of not treating them as Ganikas.

But the phase didn’t last. After the Mughal rule declined in Odisha and Andhra, the temple rose again, but this time with the all-powerful priest at the helm of it. Devdasis, who once could influence the decision of the king, were now just nartakis or dancers who followed a strict ritual inside the temple, and those uncompromising few were reduced to beg and survive. Yet, the numbers of newer daughters given to this system continued rising. In the fight to survival, finally Devdasis gave in to the will of those in the power – and once the all-powerful woman became the ‘nautch girl’. And finally, the West, which first silently proclaimed them as nautch girl and then the sinners.

And with that began the death of a creed of intelligent art curators!