Durga Puja In Bengal: What’s Missing Is The ‘Puja’ 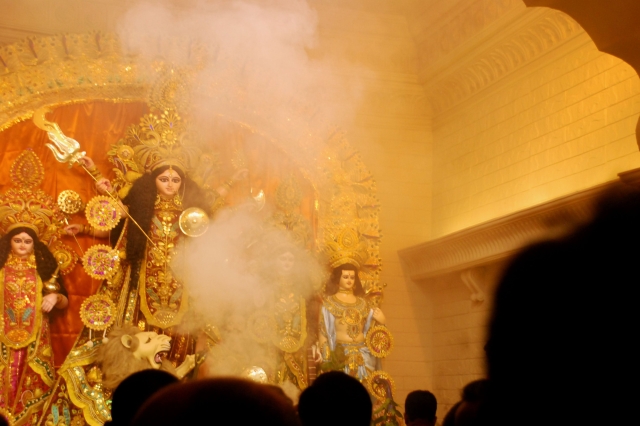 Such considerations, however, make no difference to the Trinamool chief, who also announced a hike in state doles to Durga Pujas.

Durga puja is, unquestionably, the biggest festival of Bengal and Bengalis. It is a grand carnival that is a sight to behold and a lifetime experience to savour.

But as the years have gone by and the community – or barowari Durga pujas – have increased in size and scale, and glitz and glamour, what has got eroded slowly but steadily is the religious part of the festival.

So much so that today, most of the big barowari pujas are only grand spectacles created to get maximum footfalls, eyeballs, eulogies and, of course, awards. They are all big-budget commercial ventures where the actual ‘puja’ – worship of devi and the rituals intrinsic to such worship – take a small seat in a neglected corner backstage.

The marquees (known as pandals) are jaw-dropping showpieces in creativity and style, and often set in a theme. Many are grand and creative replicas of temples and other famous structures, often historical, from around the world. Famous artistes design them.

The interiors of these grand pandals are bedazzling and often awe-inspiring and the masterful craftsmanship on display is sheer brilliance. Many of the murtis of the goddess and her children, complete with Mahishasur and her vahan (the lion), are designed by reputable artistes and cost a fortune.

Last year, the vastra (attire) of the goddess at a famous community puja in Kolkata is woven with gold and silver threads and has been sponsored by a well-known jeweller.

Almost all the community pujas get money from corporate houses ranging from cement and steel manufacturers to garments and white goods makers. The smaller community pujas, too, depend on local small businesses for sponsorships.

Businesses (the sponsors) don’t give fat bucks to the organisers of the community Durga pujas for charity, but for handsome, though largely intangible, returns. The organisers put up huge hoardings and banners of the sponsoring companies and businesses. The bigger, more attractive and more ostentatious the pandal, the higher the footfalls and this is what the sponsors look for.

The bigger pujas engage public relations firms to get good publicity in the print and electronic media and get celebrities to visit their pandals which, in turn, generates more publicity for that particular puja. They also engage event management firms to get big artistes to perform at their cultural programmes.

They get celebrities like movie stars to ‘inaugurate’ their pujas. Catering firms are given the contract for preparing and serving bhog. And, thus, the pujas have become completely commercialised, riding as they are on mega bucks.

In many of the bigger community pujas, the main murti of devi is not worshipped. The main murti is there just as a display, a prop. It is another smaller murti that is worshipped and this worship, or the actual puja, may not even take place in the main pandal, but at an adjoining one that few except the organisers and their families may visit.

“Our main murti is too big to be worshipped and so we have another murti for the actual puja. Also, we cannot have devotees throwing flowers at the main murti of the goddess during pushpanjali. The actual ‘puja’, as such, takes place behind the main pandal,” a secretary of a major puja committee in south Kolkata, who wanted to remain anonymous, told this correspondent last year.

The primary purpose of organising the community pujas, or barowari puja (named so since the first community Durga puja was organised by 12, or baro, Brahmin friends at Guptipara in Hooghly way back in 1790) was to foster community bonding. Till then, only rich zamindars and traders used to hold Durga pujas in their own mansions and while the local community could participate in some of the rituals and would be fed the bhog (prasad) every day, the will of the family holding the puja prevailed.

The community pujas came to be held to ensure participation of all, irrespective of caste, class and creed, in organising the puja. All the residents of the locality would happily get together to collect small individual donations and hold modest pujas, and during the four days of the pujas, would eat, worship, pray, celebrate, dance and sing together.

That fostered the community spirit. And the religious aspect occupied centerstage in the festivities. It was, after all, Durga puja.

Sadly, today, most of the community pujas lack wholehearted participation by the local community. The pushpanjali is quite often a perfunctory affair, the bhog is given the go by with most preferring to ‘eat out’ in restaurants and even roadside fastfood stalls, and the evening dhunchi naach is a well-choreographed affair performed not by young men of the locality, but by professional dancers.

People of the neighbourhood hardly get together to stage cultural programmes. Until even a couple of decades ago, the sound of the dhak from the local puja pandal in the morning would be the clarion call for all people of that locality to bathe and hurriedly congregate at the pandal to get on with their pre-assigned tasks – cutting fruits and arranging them to be served to devi, helping the purohit with the rituals, helping distribute flowers and bael leaves for the pushpanjali, cooking the bhog and serving it, cleaning the pandal for the evening arati and other rituals, organising and staging cultural programmes in the evening and then looking forward to a repeat of all this the next day, for the four days of the pujas.

Now, most Bengalis mostly look forward to pandal-hopping, eating out, meeting friends and, just maybe, offering pushpanjali if it is convenient. Durga puja has, in Bengal, thus become a major spectacle sans religiosity.

The genesis of this can be traced to the institution of awards for the best pandal and best murti by corporate houses (see this). That triggered competition between the organisers of community Durga pujas to get more and bigger sponsors and increase the scale of their pujas.

Along the way, the puja organisers started soliciting the help of politicians to collect funds from companies and the politicians themselves discovered that patronising the big pujas which draw huge crowds are a good way to increase their popularity.

Today, all major community Durga pujas proudly boast of prominent politicians as their patrons. And this association with politicians carry with them the attendant ills which need no elaboration.

In today’s Bengal, it is the Trinamool Congress bigwigs who patronise the major pujas, and all of them vie with each other to get their party chief to ‘inaugurate’ their pujas. That Mamata Banerjee ‘inaugurated’ quite a number of Durga pujas even before the advent of devi paksha (heralded by Mahalaya) is quite another matter and something that never dawned on most people.

Understandably so, since the puja has gone out of Durga puja and it is only a festival, albeit a major one, now. Durga puja has, appropriately perhaps, metamorphosed into ‘Durgotsav’ (Durga utsav or Durga festival) in Bengal. Sadly, Durga, or devi, has little to do with all that festivity and merry-making.