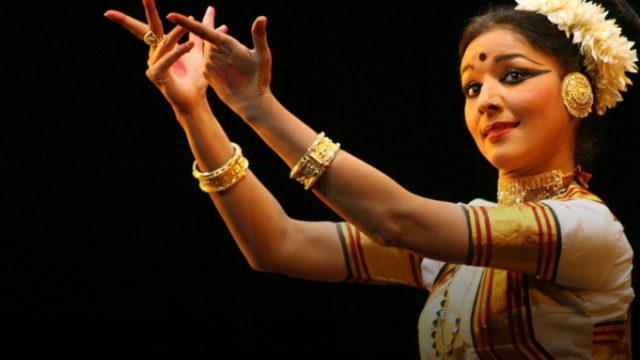 Spring and Kamdeva, the god of love, are inseparable. In Indian aesthetic traditions, ananda (bliss), prem (love) and saundarya (beauty) blend to become one. Our experience of beauty is followed by delight, and the object of delight becomes the object of love. Love has different qualitative forms. Love for the beloved, love of a mother for her child or the individual’s love for the divine. The experience of love is an aesthetic experience. It beautifies our life and converts a person into an egoless being.

In Raas Lila and Tandava

In Radha and Krishna

Sringara is described as rasa raja, the peak of emotions in Indian aesthetics that not only celebrates and defines humanity, but is equally evocative of divinity. Perhaps, its finest and most potent example is Jayadeva’s 12th century work, Geet Govindam, an integral part of Indian classical dance, especially forms like Manipuri, Odissi and Mohiniyattam. The Geet Govindam is also referred to as the Sringara Mahakavya, where the predominant sentiment is sringara (erotic sentiment) in its various moods in relation to the divine love between Radha and Krishna. Jayadeva’s songs are explicitly sensual and celebrate the sensual joy of divine love. Love becomes a metaphor for weaving the physical and the metaphysical.

The ashtapadi, “Lalita Lavanga Lata……” is a poignant evocation of spring, the tender creepers swaying in the gentle breeze, and Nature exploding with the beauty of renewal. Paradoxically, while spring is redolent of love and beauty, it only stokes an anguished Radha’s pain of separation from Krishna. Spring, in Indian literature, is both powerful and painful for parted lovers. According to certain Tantrik folk traditions, Radha is reminiscent of Kali, for she epitomises fearlessness — unafraid to be herself, she is powerful, vulnerable and unafraid of being judged and mocked. Radha has the courage to break out of societal norms and restrictions, and is unabashed about her love for Krishna. She is demanding, and unlike the submissive gopis, expresses her anger and hurt in no uncertain terms, even compelling Krishna to fall at her feet to appease her wrath.

Sringara lies at the very core of our Indian dance traditions. Recently, I was invited to judge films, a dance showcase, held during a Film Festival in Los Angeles. All films at the festival exemplified western dance vocabulary, modern and contemporary — vocabulary very different from that of Indian classical dance forms. While western dance is a response to experiencing life, at the heart of Indian dance lies equanimity, regardless of the outside.

I was struck by how sringara, which to me has a deep connect with femininity, is largely subverted in the contemporary western dance world. And the women dancers reflect the masculine qualities of hardness, aggression, jerkiness and heaviness. This imbalance mirrors the world at large where aggression has become the order of the day. This sharp contrast gets even more highlighted when we talk of dance forms like Mohiniyattam, steeped as it is in femininity, tenderness, beauty, sweetness, love, delicacy and nurturing.

In 1999, I felt inspired to explore sringara rasa, especially in the context of Mohiniyattam, where it was predominantly limited to the love-lorn languishing heroine. Based on a true story of a heroic woman, Unniarcha, from Kerala, it gave me the perfect opportunity to explore veer rasa. Unniarcha had the courage to have a mind of her own and follow her spiritual aspirations, despite a weak husband and miscreants, she combats by virtue of being an expert at Kalaripayattu, the martial art of Kerala. To me, she resonated with the woman of today. It proved to be a much-needed breath of fresh air, and much to my delight, the audience took it in with great enthusiasm. In sacred Indian traditions, all of manifestation is feminine energy. Do we experience Prakriti or Nature only in her beauteous and benign form? Do we experience her wrath as well? Ralph Waldo Emerson summed it up when he said, “Beauty, without expression, tires.”