Guru Tegh Bahadur's Martyrdom: A Story Of Self-Sacrifice For Dharma 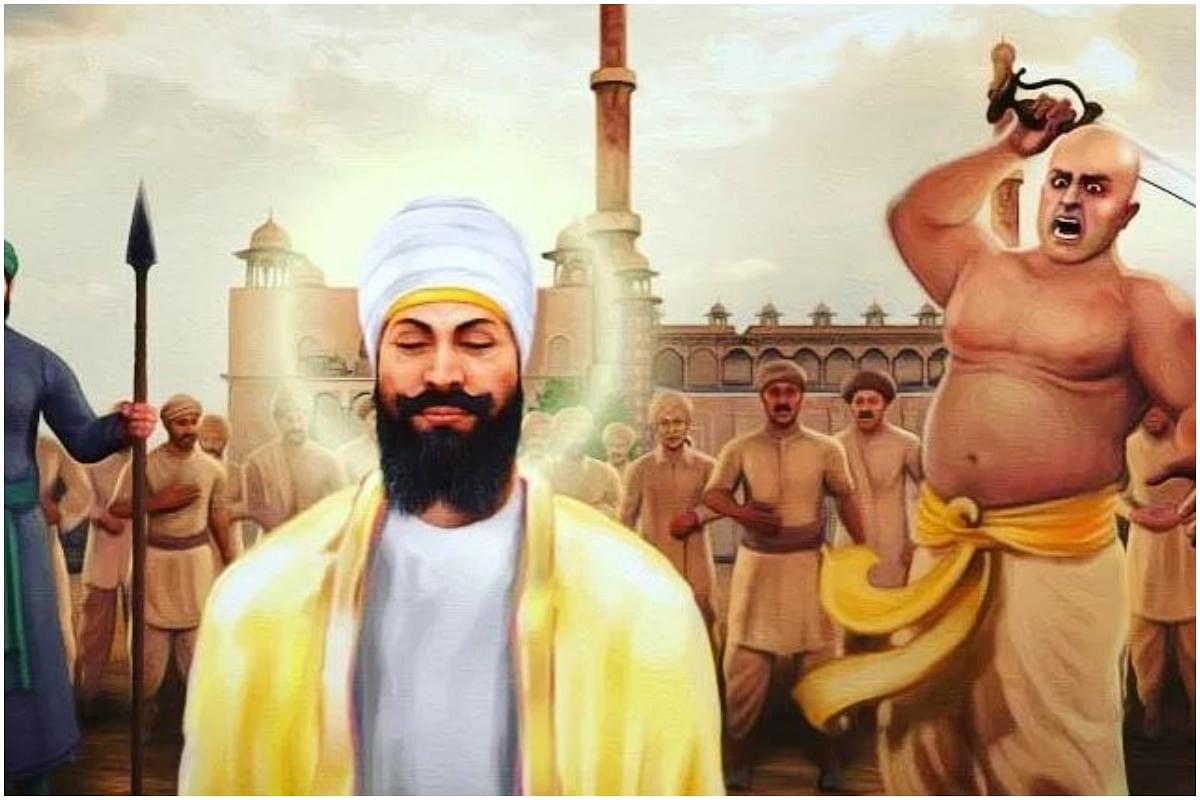 Guru Tegh Bahadur’s 400th Parkash Purab was recently celebrated at the same Red Fort from where Mughal ruler Aurangzeb gave the orders to execute him.

This article is an attempt to describe the importance of the ninth Sikh Guru to Dharma and its followers.

Guru Tegh Bahadur was settled in Anandpur Sahib in Punjab as 9h Gurus of Sikhs. He was regarded as Dharma Guru and countrymen in mass visited him to get his blessings.

Nawab Iftikhar Khan was appointed governor of Kashmir in 1671. He was chosen by Aurangzeb to convert Pandits to Islam so that the common people might follow their example. His proselytizing activities terrified the Pandits. They were in search of a guide to help them. In the Deccan, Shivaji was resisting the Mughal government. In northern India, the revolt of Jats of Mathura under Gokal Jat in 1669 had been crushed.

In 1672, the Satnamis had been completely wiped out. The Pandits' very existence was at stake. In the Punjab, Guru Hargobind alone in six hundred year's Muslim rule had provided military leadership to Hindus and Sikhs for the first time. The Pandits thought of waiting upon his son Guru Tegh Bahadur, A 15-man-deputation of Kashmiri Pandits under Kirpa Ram Dat of Matan arrived at Anandpur on 25 May, 1675.

The Guru's heart melted at their tale of woe. He became uneasy and restless at the sad plight of innocent people. At this time, eight-year-old Gobind Das appeared there. He innocently asked the cause of sadness of the Guru and the visitors. The Guru replied that the nation required a holy man to sacrifice his life.

The child thoughtlessly remarked that there could be no holier person than the Guru himself. It was enough.

The Guru took the child's observation as God's word. His resolve was made. He informed the Pandits that they should tell the governor to convert Tegh Bahadur first, and they would follow his example.

The Pandits went back and told the Governor, who conveyed it to Aurangzeb at Hasan Abdal, situated close to the borders of Kashmir. The Emperor's mind was already prejudiced against Tegh Bahadur. He issued a firman to the governor of Lahore to arrest the Guru and keep him in prison until he was called at Delhi.

The Governor of Lahore passed on a copy of the imperial firman to Abdul Aziz Dilawar Khan, faujdar of Sarhind, with instructions to execute the orders in such a way as not to arouse any serious alarm in the region, and to treat it as most confidential. The faujdar instructed Nur Muhammad Khan Mirza, the Kotwal of Rupar, in whose jurisdiction Anandpur was situated, to arrest the Guru quietly and immediately send him to Sarhind.

The Guru accompanied by three devoted Sikhs, Mati Das, Sati Das and Dyal Das left Anandpur on 11 July, 1675. After covering about 40 kms, the Guru halted for the night at Muslim Ranghar village, Malakpur Rangbaran, Pargana Ghanaula, near Rupar, and put up with his disciple named Nagahia. At about 3 o'clock next morning on 12 July, the Guru and his three companions were taken prisoners, and were hurriedly whisked away to Sarhind. After four months the faujdar put the Guru in an iron cage and fastened it on the back of an elephant. His companions were fettered and handcuffed, and were carried in a bullock cart to Delhi.

Aurangzeb asked him to embrace Islam. The Guru replied that as for embracing Islam he considered his own religion as good as Islam, and therefore the change of religion was not necessary. The emperor ordered that the Guru be put to the severest tortures. After five days of persecution Aurangzeb tried to forcibly change the mind of GuruJi.

Dyal Das, Mati Das and Sati Das, Mohiyal Brahmins from Jhelum as well as the Guru were brought to the open space in front of the Kotwali where now stands a fonrtain. First of all Bhai Mati Das was asked to become a Musalman. He replied that Sikhism was true and Islam was false. If God had favoured Islam, He would have created all men circumcised. He was at once tied between two posts, and while standing erect, was sawn across from head to loins.

Dyal Das abused the Emperor and his courtiers for this atrocious act. He was tied up like a bundle with an iron chain and was put into a huge cauldron of boiling oil. He was roasted alive into a block of charcoal.

Sati Das condemned the brutalities. He was hacked to pieces limb by limb.

All this happened before the very eyes of Tegh Bahadur. He was all the time repeating 'Wahe Guru'.

He knew his turn was coming next. He remained stone-like, unruffled and undismayed.

His energy, thoughts, ideas, feelings and emotions had concentrated on Wahe Guru, and dazzling divine light was beating upon his face. He realized that such immortal sacrifices could not go in vain. Their name would live forever.

November 11, 1675, around 11 o'clock in the morning was the time fixed for the Guru to reply. Keeping in mind his promise to the Kashmiri Pandits, the Guru continually chanted the following hymn: Bāhen Jināhn di pakariye, Sar dije bāhen na chhoriye Tegh Bahadur bolyā Dhar payae dharma na chhoriye. (Give up your head, but forsake not those whom you have undertaken to protect. Says Tegh Bahadur, sacrifice your life, but relinquish not your faith.)

A little before 11 O'clock Guru Tegh Bahadur was brought to the open place of execution in Chandni Chowk, where now stands Gurdwara Sis Ganj.

The Qazi, several high officials, and the executioner, Sayyid Jalal-ud-din of Samana with a shining broad sword in hand were already there. A contingent of Mughal soldiers stood on guard. A large crowd of spectators had gathered outside the barricade. The Guru stood in front. The Qazi asked him either to show a miracle or embrace Islam or face death. The blow was given and the head of the Guru rolled on the floor.

After the execution Guru's head and body were placed on the back of an elephant and paraded into the streets and bazaars of Delhi. They were kept at the Kotwali in Chandni Chowk. Aurangzeb then ordered that parts of his body be amputated and hung about the city.

The Guru's body lay at the gate. Jaita slipped out quietly, picked up the head and fled away towards Sabzi Mandi. He tied the head in a sheet, fastened it on his back and covered his body in an old, dirty blanket. Lakhi's son and a servant lifted the body, hid it in cotton and rushed off to Raisina, and to their home in Rikab Ganj village. Lakhi set fire to the house to avoid detection to perform cremation of Guru's body. After two days the Guru's ashes were collected. They were put in a bronze pot, and buried under ground at that very spot. Gurdwara Rakab Ganj marks this site.

Jaita was carrying the head. He went from Azadpur to Sonipat to Karnal. From Karnal he took the pathway to Pehowa, Ismailabad and Ambala. He reached Kiratpur on the afternoon of Tuesday, 16 November, 1675. He covered 320 kms in five days. Gobind Das performed the ceremonial cremation of the head on 17 November.

His great-grandfather, the fifth Guru, Arjan, was executed at Lahore. His grandfather, the sixth Guru, Hargobind, had been imprisoned in the Gwalior fort for twelve years. His father was beheaded simply because he happened to be the head of a religious body. There had been no change in the attitude of rulers as described by Guru Nanak even after two hundred years. The Guru came to the conclusion that if the king was bad, people must rise in revolt.

Under the direction of the Guru, the Khalsa took up the profession of arms. The down-trodden people who had lived for centuries under servility turned into doughty warriors. In the course of one hundred years they not only ended the foreign rule but also put a stop to the foreign invasions from the north-west.

Dr. Vivek Arya is a Child Specialist, Medical Doctor by Profession. He is widely interested in Vedas, comparative religion study and Indian History. He is inspired from Swami Dayanand, the great scholar of Vedas.
Get Swarajya in your inbox everyday. Subscribe here.
Tags: