Have A Beetle, With Love! 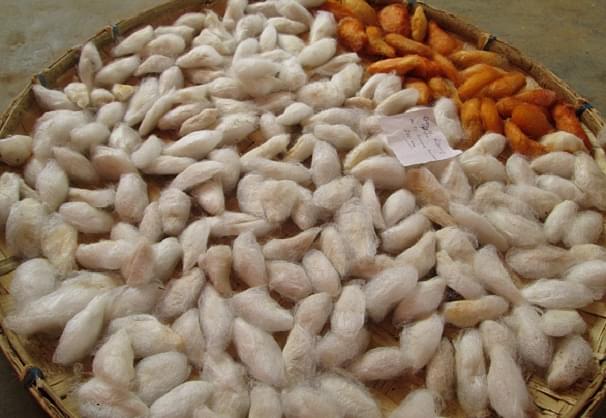 In North East, a bowl of deep fried silk worm with Zu Mai, a conventional drink, is a sign that you are truly loved!

When it comes to tradition and culture, North East may be a different India, even to the Indians living here. But the one thing that these seven sisters have in common with the rest of the country is that here too food is the superlative language of respect and love.

In fact, the tribes of Assam and Meghalaya, like the rest of India, too have their own little traditions of showing love. How well you slather the Pitha, a fluffy red rice pancake made in Meghalaya, with the Eri Leta and Khorisa often defines your love for someone – be it a guest or an amor – is one of those. `

Sounds no different from the famous Bengali saying “love is often a big, soft, white, syrupy rosogulla”, but that is till one realises that Eri Leta is a chutney made of Eri silk worm and Khorisa is an Assamese special bamboo shoot pickle often served with an addition of a mash made of ants, beetles or silk worms.

And with that love has every chance of flying out of the window, because insects – the category that even Slow Food defines them under – are generally repulsive beings of nature, who in spite their size can often throw newer, often dangerous surprises.

But not for the tribes of the North East, for whom insects are as big a part of a healthy food system as is rice, pork, heart spinach, lemon and bamboo shoots. In fact for many traditional tribes from the Garo Hills, they are the ‘apple’ that keeps the illness (and the doctor) away.

Super rich sources of protein, zinc, iron, vitamins and antioxidants (the Tarri beetle is often used for flavouring some of commercially-produced drinks and cosmetics) during stark winters when the land is regenerating hence little is produced, these insects form a important part of the meal – not only as a delicacy but also as an immunity building scrumptious pill, says Chef Joel Basumatari.

One of the few chefs in India to give insects a gourmet makeover, and a part of the NESFAS (North East Slow Food and Agrobiodiversity Society) culinary team, Chef Joel has designed a therapeutic menu that is designed to harness the taste and health properties of these creatures that were once the part of the traditional warrior’s meal.

The reason for this, says Chef Joel, “is that these are extremely easy to cook and flavour. A good leta or polu only needs that the insect is boiled well. Once that is done, a few drops of bamboo shoot oil and chillies with a squeeze of lemon juice is all that is needed to make a meal out of it, which can be had with rice.”

Legend had it that when Meghalaya hero, Kiang Nangbah, set on war against the British, he carried with him a big box of beetles, ants and Eri Silk Worm that had lasted him, and his men, during the war that lasted a good part of the winter.

It is the technique that the chef often uses when he is introducing the grasshopper to unsuspecting guests. “The beauty of cooking with lesser, but fresher ingredients is that while you keep the tasty part of the insect, you also lend it just the right amount of flavourants to make the bite tasteful.”

Joel’s grasshopper fry, bee salad, which he does with bamboo shoots and wild greens, and carpenter’s worm, which he likes to call the Saffron gem, because of its colour, and also because its prized at Rs 10,000 a kilo, has been the toast of the Taste Theatres across the world.

Curiously interesting as the description seems (and I vouch for the taste), harvesting any of these insects is a true Mission Impossible. One of the main reasons, says Jimsi Tassar, an activist working with the breeding and harvesting of the Assamese Tarri (River bed Beetle), for this is gathering them is a threatening process, because each of them has been blessed with a defence mechanism that allows them to form a chemical shield around them.

Like for Tarri, she says, “they are gathered only during the winters when these go in hibernation under the stones, after feeding of rice, leeches and other fruits. It is then that the village women turn each stone in the waterbed to find these tasty treats that are boiled, roasted and turned into delicacies.”

Sorted as agent of flavourings because of their strong citrusy after taste, these beetles fascinatingly are pest that can ruin a crop with an ease of a starving giant. Often served with boiled dal and rice, palate-wise these beetles are prepared much like the Maharastrian dried shrimp, and to an unassuming tongue will taste similar – albeit with more freshness and crisp.

These River bed Beetles along with Eri Silk worm are often roasted on a bamboo tray over hot fire seasoned with salt and turmeric (Meghalaya has the best haldi in the world) and then tossed with wild tomatoes and herbs to be presented as a salad with the traditional rice wine – a harvest speciality.  In fact, in tribal custom a meal that signifies acceptance, love and more importantly warmth.

So next time in North East, if someone presents you with a bowl of Eri Pula, Korisha and Dal, consider it as love. And rest assured, you will live to tell the tale – as I did. After all, known to be warm blooded these insects are perfect antidotes to the bone chilling winters here.