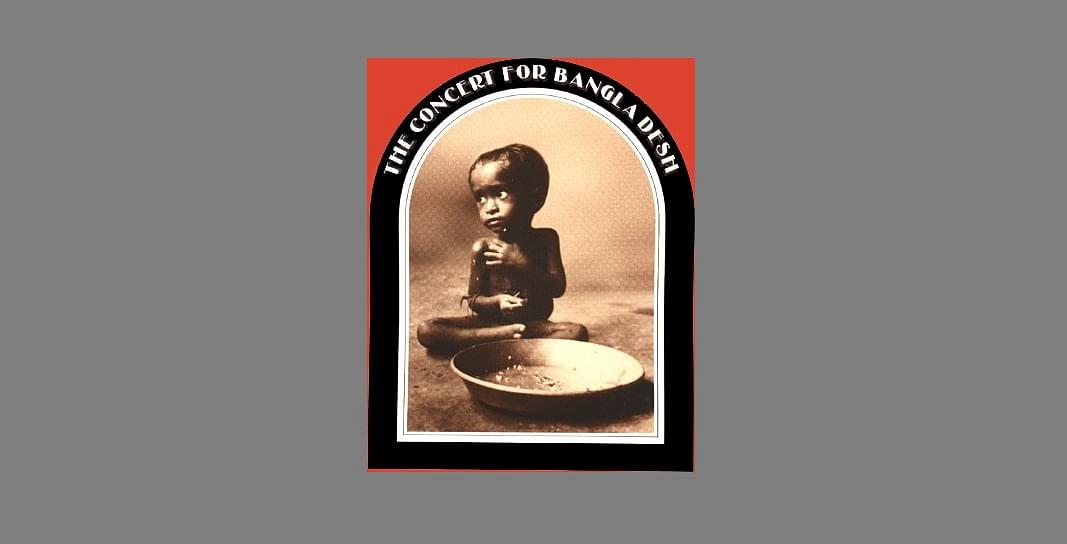 Poster for the Bangladesh Concert

Memory can play tricks on you, as it did with me when I was trying hard to recall how and when I came to know of George Harrison’s The Concert for Bangladesh at New York’s Madison Square Garden on 1 August 1971. Growing up in small town Jamshedpur in an era when the only source of information was The Statesman unless you also tuned into BBC World Service every night, it was not easy to keep pace with events beyond India’s shores.

It was possibly during the summer vacation of 1975 that I came across the album, The Concert for Bangladesh, a three-LP boxed set with its memorable cover of a Bangladeshi refugee child – a stark image of innocence betrayed, reproduced along with this article, that has since remained indelibly stamped on my mind. This was in a second hand record shop in Kolkata’s Free School Street. The shop-owner refused to part with the album even when offered the princely sum of Rs 100. It was not for sale, but he would make a copy on a 90-minute cassette which would cost Rs 25. That cassette, its tape worn thin, remains a prized.

Meanwhile, the album had become a collector’s item, both for the fact that it was the first such venture to raise funds to help victims of a human catastrophe – Live Aid came many years later – and its stirring music, especially Bangla Dhun performed by Pandit Ravi Shankar, Ustad Ali Akbar Khan and Ustad Alla Rakha, apart from George Harrison’s Bangladesh. Some years ago, The Concert for Bangladesh was re-released as a two-CD set, but it did not surface in Indian music stores. During a visit to London, I checked at the Virgin store and was lucky to get the last remaining copy.

The live recording of a concert – eloquently described by Pandit Ravi Shankar as “the most moving and intense musical experience of the century” – organised 45 years ago by a musician who has been dead for 15 years should really not be of any consequence to merit elaborate mention. But the relevance lies in both the events that prompted the concert and the fine print of the booklet that now accompanies the re-mastered album, a far more lavish production than the three-LP boxed set with its half-tone pictures and scratchy music.