Demography Watch: How Northeast India Was Christianised In The Last 100 Years 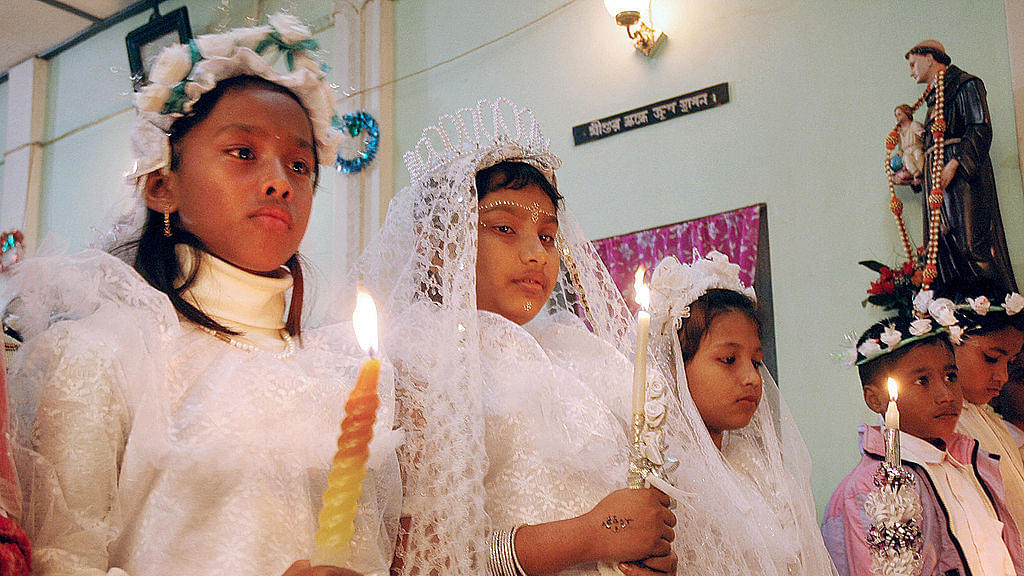 Indian children hold candles as they stand ahead of their first communion during the celebrations of Christmas at a church in Agartala, capital of India’s northeastern state of Tripura, early 25 December 2006. Although Christians make up less than 3 percent of the country’s one-billion-plus population, Christmas is widely celebrated in India. AFP PHOTO (Photo credit: STRDEL/AFP/Getty Images)

The Centre For Policy Studies (CPS) has published its latest note on the Religion Data Census of 2011. The note shows how the demographics of the northeast have drastically changed in the last century.

Northeast India forms a major region of Christian concentration in India today. Of the 2.78 crore Christians counted in 2011, 78 lakh are in the northeast (including Assam). This is the largest concentration of Christians in India after the coastal region stretching from southern Tamil Nadu and Kerala to coastal Karnataka, Goa and Maharashtra.

But unlike other regions, the spread of Christianity in the northeast is almost entirely a phenomenon of the twentieth century. Much of the Christian expansion in the northeast occurred during 1931-51, and more prominently during 1941-51.

This expansion has continued unabated since 1951. The tribal populations of Mizoram, Manipur and Nagaland have now become almost entirely Christian.

The earliest part of the northeast to witness the expansion of Christianity was Meghalaya. This was largely because the British administrator handed over the responsibility and the budget for school education to the Christian missions.

Notwithstanding the early arrival of Christianity in Meghalaya, the spread of Christianity there was relatively slow after Independence. But the share of Christians in the population of Meghalaya has continued to rise robustly from decade to decade and has reached nearly 75 percent in 2011. It seems some of the tribes in Meghalaya are still resisting conversion.

Christianisation of Nagaland happened mostly in the decades leading to and following the Independence. The share of Christians in the population of the state was around two percent in 1911, which increased to 13 percent in 1931 and to 46 percent in 1951.

Arunachal Pradesh remained beyond the reach of the Church until 1971, when the area was brought under civil administration. Since then, the share of Christians has been rising rapidly from decade to decade and has reached above 30 percent now. Many of the tribes of Arunachal Pradesh have now acquired large Christian majorities.

Assam, like Meghalaya, had acquired a significant Christian presence already in 1901. About 22,000 Christians were counted in the state at the time. These early Christians were mostly from the migrant tribes in the tea plantations of upper Assam.

The number of Christians in Assam has since multiplied 85 times, and their reach has spread to many of the indigenous tribes. Their share in the population, however, is much less than in the surrounding hill states. Christians had a share of 0.4 percent in 1901. Their share in 2011 reached 3.75 percent.

Their share in the tribal-dominated districts of Karbi Anglong and Dima Hsao, and in some of the Bodo districts, is much higher.

There were only about 5,000 Christians in Tripura in 1951. Today, the number stands at 1.6 lakh. Much of the rise has taken place after 1981 and particularly during the last two decades.

Sikkim, in the neighbourhood of the northeast, has also seen rapid expansion of Christianity since 1971.

The history and timing of Christianisation of the northeast indicate that administrative, political and strategic impulses have played a large role in this phenomenon. The early beginning of Christianisation in the hill states of the region was encouraged and facilitated by the British administrators. This facilitation went to the extent of vesting the entire responsibility and budget of school education on the church in the area that now forms Meghalaya.

The tentative spread of Christianity through the cooperation of the British administration in the earlier part of the twentieth century was followed by a great spurt at the eve of Independence.

The data clearly shows that Christianity got entrenched in the tribal populations mainly during 1931-51. In that period and following Independence, the Church began to inspire and lead the various militant assertions of tribal and regional sub-nationalism in this region. This seems to have helped the continued expansion of Christianity throughout the region after 1951.