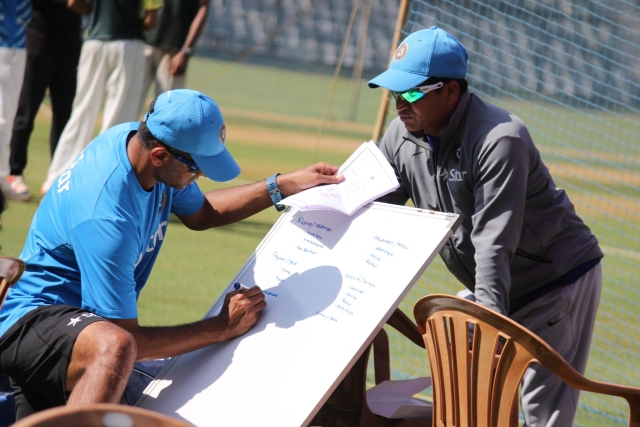 Rahul Dravid at work as a coach guiding the younger Indian players coming up the ranks. (Photo: Indian Cricket Team/Facebook)

‘It has destroyed the game. Crass, commercial, and a purist’s nightmare’.

Many cricket lovers, including me, agree largely with this assessment of the Indian Premier League (IPL). Yet, here I am arguing days after India’s greatest test victory abroad that it is the puerile smorgasbord of wishy-washy stuff, which is passed off as cricket, that is responsible for what happened at Brisbane.

Let us consider the facts.

India lost two key players to injury before the start of the series – Ishant Sharma and Bhuvneshwar Kumar – due to the IPL.

They lost the services of Rohit Sharma for the first two tests for the same reason.

They lost another seven of them due to non-IPL-related injuries and Virat Kohli to well-deserved fatherhood.

Yet they had the bench strength to compete. And not just compete but triumph – by rubbing the noses of the most feared bowling attack to the ground.

Washington Sundar opens the bowling for the Royal Challengers Bangalore in the powerplay and concedes 7.53 runs an over. Imagine being thrown to the sharks with your legs tied up. That’s a finger spinner being asked to open the bowling at the world’s largest slugfest for you.

This experience allows him to face any adversity, making him believe that he can take anything on the chin and smile.

Rishabh Pant was body-shamed for his weight problems. His wicket-keeping skills are not rated highly in comparison to international test keepers. The selectors dropped him from the One Day International and Twenty20 squads, keeping him in the test squad only.

Pant scored 343 runs in 14 matches in this year’s IPL at a strike rate of 113.95, his lowest ever in the league. But he is under the mentorship of Ricky Ponting, unimaginable in the pre-IPL world, and it is Ponting who has asked him not to throw caution to the winds.

Shubman Gill is different. He was born to excel at cricket. Picking up the bat at age three, backed by his father’s foresight and sacrifice, he is the youngest Indian to score a first-class double hundred.

He has already played 58 List A matches with only 26 first-class matches under his belt and has captained the India List A squad when he was a little over 20 years old.

The much-maligned Board of Control for Cricket in India (BCCI) has clearly got something right here. Having Rahul Dravid at the helm of the India A and under-19 squads till 2019 was the equivalent of sending young girls to the Swiss Finishing Schools in the early 1900s.

Dravid was the most sound batsman technically. He wasn’t called “The Wall” for nothing. Yet, his contributions to the squads are much more than ironing out the chinks in the batting armour of the young, unformed men.

He gave up his role as a mentor of the Delhi Daredevils IPL team in 2017, when the conflict-of-interest issue reared its head, and chose to stick to grooming the greenhorns all year round.

Given his clout and stature, he could have had his way and got the BCCI to look the other way for two months a year.

Why, even Sourav Ganguly, the president of BCCI, is advertising for one fantasy cricket league while the board is officially sponsored by another.

Dravid was receiving Rs 4.5 crore for two months of IPL against the Rs 6 crore pay for 12 months of being on the road in South Africa, Australia, and New Zealand with the boys. Imagine his influence on the young players.

Which brings us to Cheteshwar Pujara and Hanuma Vihari.

Neither of them is picked by an IPL team anymore.

They are ‘boring test specialists’ who get Rs 5 crore and Rs 1 crore respectively as part of the central contract for playing test cricket for India.

They are paid these amounts because of the cash that IPL brings in. They would have spent hours preparing, through the lockdown and the IPL in the United Arab Emirates (UAE), for the one thing that matters – test cricket.

In the early years, Pujara seemed keen to do well in IPL, altering his batting style and trying the hoick over mid-wicket, later realising that he may end up jeopardising his ability in the one form of the game that he knew how to play, which involved grinding it out, persevering, and holding up one end.

Pujara treats Australian fast bowler Pat Cummins with respect and the trolls with disdain, doing what he does best. He played 928 balls in the series, 22.6 per cent of all that the Aussies hurled at the Indians.

Vihari, on the other hand, had a pathetic series, scoring 49 runs in the four innings before the second outing at Sydney.

Playing with a grade-two hamstring tear, he batted for three hours along with Ravichandran Ashwin, facing 161 balls for his 23 not out. Never out.

Vihari’s grit and determination made him face rejection by IPL teams and focus on what he knows best.

I have been a proponent of levying an IPL cess of 2 per cent on all IPL salaries to pay our test specialists. That way, many more cricketers would be tempted to keep grinding it out and not try to impress the IPL scout.

Interestingly, the BCCI is considering scrapping the domestic Ranji Trophy this season, given the long bio-safety bubble requirements.

Pujara and wicket-keeper Wriddhiman Saha are the only players in the test squad who featured in last year’s Ranji Trophy finals played between Saurashtra and Bengal.

Pujara, battling high fever, came into bat at number six, an unusual batting position for him, and scored 66 of 237 balls, helping his team get a first-innings lead and thereby the trophy.

No story on the greatest battle ever fought can be complete without discussing the weaponry or the artillery, the bowlers.

India’s fast-bowling riches have been overflowing for a few years now, given our investments through the MRF Pace Foundation and the National Cricket Academy’s rehabilitation programmes.

We lost Mohammed Shami, Umesh Yadav, and even Jasprit Bumrah, who was initially selected for test cricket on the back of his IPL performances. Yet we were able to bowl fast at the Aussies. Mohammed Siraj’s teary-eyed salute to his deceased father when the National Anthem was played, warmed every Indian’s heart.

Siraj was a net bowler for RCB when bowling coach Bharat Arun spotted him and backed him to the hilt.

He has played 46 List A matches against only 41 first-class matches. His IPL riches allowed him to send his parents to Haj and build them a house, well before he was established in the blues.

Just like Siraj, Navdeep Saini and T Natarajan cut their teeth on tennis-ball cricket on dusty grounds in mofussil towns, which have sprouted local premier leagues – all pale imitations of the IPL, but fertile grounds for harvesting those who can bowl toe crushers ad infinitum.

They hadn’t picked up the red cricket ball till they were in their 20s, leave alone harbour the thought of having Steve Smith hopping.

Shardul Thakur’s batting prowess wasn’t known outside of school cricket circles, where he was known for hitting six sixes in an over, his highest first-class score being 87.

His bowling was rated highly at the Ranji level, with 213 first-class wickets, and he burst into the limelight with eight wickets in the 2015-16 final against Saurashtra.

They collectively represent a new India that grew up in the IPL era. They rubbed shoulders with international greats in the dressing rooms, learnt to fear none, and imbibe from the best.

This fearlessness was on full display throughout the series.

The Indian spin twins Ashwin and Ravindra Jadeja played their part, bowling tight lines with a leg-side trap and putting their bodies on the line when batting.

The Indians got used to living in a bio-bubble in the UAE, then transitioned to another bubble and a hard quarantine.

Siraj couldn’t get a final glimpse of his father.

Umesh Yadav got back home just in time to welcome his first child, only because he picked up an injury.

They couldn’t use the pool for rehab, had to make their own beds and clean their toilets in Brisbane. These things didn’t matter to the working-class cricketers. They would have been eking out a living as blue-collared workers if they had only first-class cricket to support them.

The victory at Brisbane was built on the financial foundation and international exposure that IPL has provided Indian cricket and its lesser players. It was polished to finesse by Dravid, through the many conversations he would have had with many of the players as their head coach between 2016-19.

Courage, grit, determination, and fearlessness are good adjectives, but all of them occur by design and not chance. IPL and Dravid have played their parts.