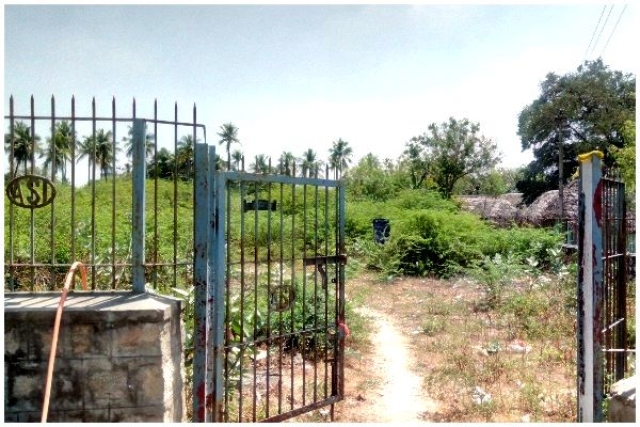 The birthplace of Tamil bard Kambar at Therazhundur village in Nagapattinam district. Taken over by ASI, it is a symbol of negligence.

While he named various forms of Ramayana from different parts of the country, he mentioned this quote which means 'we need to fulfill our duty without any time delay' and added that we need to act per Lord Ram's words.

But unfortunately, the birthplace of the man who wrote this epic in Tamil at Therazhundur in Tamil Nadu's Nagapattinam district is lies neglected and uncared for.

Kambar, a Tamil bard called “King of Poets” or Kavi Chakravarthi by Rajendra Chola in the 12th century, was instrumental in penning the Ramayana in Tamil.

Kambar was asked by Kulothunga Chola, who got to know about Valimiki’s Ramayana, to write the epic in Tamil. Besides writing Ramayana, Kambar has written verses in praise of Goddess Saraswati, a literary work in praise of Vaishnava saint Nammalvar called Sadagopan Andhadhi and a couple of others, including one on Pallava king Karunakara Tondaiman.

It is believed that one reason why Kambar was blessed with such a talent was that he was born at Therazhundur, one of the 'divya deshams' or 108 must-see sacred sites for Vaishnavas.

This village is also one of the 276 places that figure in the hymns sung in praise of Lord Shiva in the Tamil Saivaite devotional poetry Thevaram. One of the 63 Nayanmars (saintly devotees of Lord Shiva), Thirugnana Sambandar, has sung about this village, particularly the Vedapureeswarar (Lord Shiva) temple.

The last of the 12 Azhwars (Tamil saint poets who composed hymns in praise of Lord Vishnu), Thirumangai Azhwar, has sung in praise of this village’s Sri Devaadi Raja Perumal or Sri Amaruviappan temple in 45 pasurams (hymns). The temple has a small shrine in which Kambar and his wife can be seen praying to Lord Vishnu.

Legend has it that King Uparisaravasu of the Seth Kingdom was gifted a chariot by Lord Indra. Whenever the king flew in the sky with the chariot, whatever objects that came under the chariot’s shadow, got burnt.

One day while flying his chariot, Lord Krishna’s cows came under the chariot and its shadows killed them. Infuriated, Krishna crushed the shadow of the chariot with his leg and brought it down. Along with it, Krishna also burst the ego of the king.

There are other stories too. One is that King Uparisaravasu mediated in a dispute between rishis (sages) and devas (gods) in the latter’s favour. Upset, the rishis cursed the king that his chariot wouldn’t fly in the sky. So the chariot got stuck in the place. In Tamil, Ther means chariot and azhundur means the place where it got stuck.

Therazhundur village is also a place where Goddess Parvathi was believed to have assumed the form of a cow and where Sage Agasthya had also offered prayers. Thus, Therazhundur has much significance in Indian cultural and spiritual history.

It is in such a place that Kambar was born. The belief is that he was born in a family of traditional nadaswaram players but grew up in a wealthy farmer’s house at Vennai Nallur in Cuddalore district, some 100 km away from his birth place.

The tragedy of Therazhundur today is that most of its natives have left the village for economic reasons and due to changing demography.

As a result, the birthplace of the man who wrote Ramayana in Tamil is in shambles and a state of utter neglect.

Recognising Kambar’s efforts in rendering the Ramayana in Tamil, the Tamil Nadu government built a memorial in the main pathway to Sri Devaadi Raja Perumal temple. The memorial serves as a community hall, though it remains locked most of the time, say locals.

“Actually, the Tamil Nadu government should not have built the memorial at this place. See its surroundings. They are not conducive,” says another local pointing out to the Muslim-dominated neighbourhood.

Swarajya, in its articles on the changing demography of the region, had reported that an Arabic college had come up on the main street to the Sri Devaadi Raja Perumal temple. The memorial for Kambar is next to this college.

Locals feel the memorial for Kambar should have come up at the place where he was born. The place where the renowned Tamil poet was born is near the South Main street.

Unfortunately, there is no indication of Kambar’s place of birth, now taken over by the Archaeological Survey of India (ASI), unless a local is asked.

There is a very small pathway that leads to the poet’s birthplace from South Main street. The premises, taken over by the ASI, are, however, poorly maintained with thick vegetative growth all around.

Two ASI boards on the premises are rusting, while a signage calling it Kambar Medu is turning black with some words already being covered.

A house is coming up in the adjacent plot, further making things difficult for people to approach the place.

“This place is fast losing its significance due to the changing demography and Muslims dominating the neighbourhood. What is painful is that a great poet like Kambar, whose contribution to culture is immense, is being ignored. Why else should his birthplace face such a predicament ?,” asks an elderly person in the village.

“In fact, we should blame the Dravidian parties for all the unsavoury changes in this whole region. We are losing everything - our culture, religion, customs and traditions,” laments the elder.

As of now, even those who are natives of this village are helpless. “Unless the government wakes up to reality, little can be expected,” says another local.

All these changes have happened as the leases of lands and properties belonging to temples or charity organisations have changed hands. Local feels that the culture, customs and traditions have taken a beating in view of this.

In comparison, Therazhudur even has an Arabic educational institution for women.

Government officials in the district refused to comment, saying they weren’t “authorised” to talk to the media.