How The Gorkhas Celebrate Durga Puja 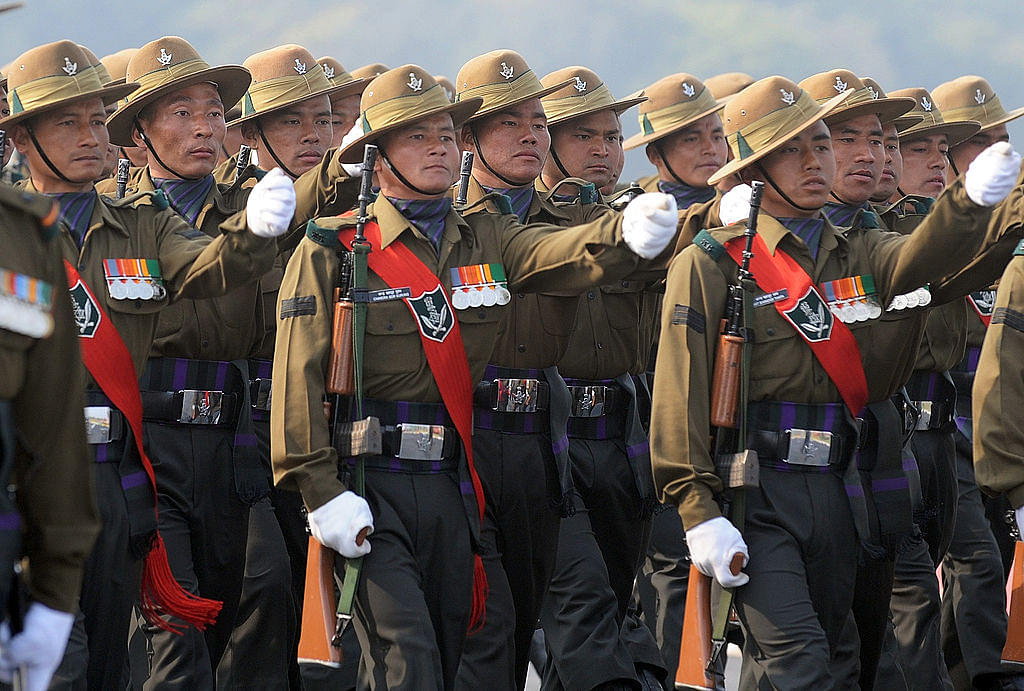 Unlike Bengal, where Durga Puja is an emotional five-day festival that celebrates the homecoming of goddesses Durga and her children, in Meghalaya, it’s all about marking the end of a karmic cycle, and starting life afresh.

Ask any Meghalese today, about Durga Puja, and she or he will promptly credit the Bengali for endowing them with the festival.

“It’s a Bengali gift to the Meghalaya,” they say.

And truly, Puja celebrations in Meghalaya today mirrors those in Bengal. Whether it be the unveiling of the face of the idols, selecting a bride for Ganesha, Pushpanjali or the Sindoor Khela (which started in Cuttack back in the late 1800s) or the cheerful farewell. The prasad too is khichuri, labra, begun bhaja and khatta. Albeit, the khichuri and labra is made with meat, especially of the buffalo, at the two shakti peethas in Guwahati (Ugratara and Kamakhya) and at the Gorkha Durga Puja, which is more famous as the Cantonment Durga Puja.

But is the use of meat the only difference between the Durga Puja of Bengal and that of the Northeast?

Fascinatingly not. In Bengal, the Durga Puja celebrations began as a ruse to feed villagers during the famine and also to bring them together. Later, it developed into a social status and eventually a community (Sarbojnin) ritual. In Meghalaya, however, it was an initiative by the Gorkhas to keep their culture and beliefs alive while venturing into the armed forces of the Raj.

The first Durga Puja that the Gorkha regiment organised was in Shillong, in 1864 in the ground behind Bara Bazaar with an installation made with weapons instead of an idol (this site is currently the seat of the Nepali Durga Mandir). It was in ode to the ancient belief of Yumaism or the biogenesis theory of life. According to this ancient thought process (followed in Sikkim, Nepal and Bhutan back in time), the human life is a cobweb of karmic cycles. And annually there is this phase – often decided and deciphered by the change of the atmospheric colour (read season) when there are three days when one can acknowledge one’s bad karma and relinquish it. In other words, it is the time when the created can sit in front of Yuma, the creator, and can earn another chance to start afresh.

So, the Puja was a ruse to retrospect on life and begin anew. The puja’s ancient link is the reason that the food made during isn’t about different preparations altogether, but few dishes picked from the local cuisine. The bali (sacrifice) in the end, to carry out which boys are especially trained, marks not only the relinquishing of the bad karma but also a new beginning that is celebrated with meat – which in the local belief is a food of sustenance and power. The intriguing side to this puja is the month (which eventually was fixed for Durga Puja) it fell in: Ahimaha (autumn month). Incidentally, the month when tribes called truce on the war front and concentrate on the tribal life, much like nature that sets to start again.

The Gorkha Durga Puja enjoys a food culture that is touted as a “gourmet meat fiesta.” Made using the seven styles of tribal cooking, the meat of the sacrificial buffalo is a very important of the spread prepared during the puja.

The culinary ingenuity derived from the Gorkhas is the highlight of every cantonment Durga Puja even today. Picture this: the feast cooked by the regiment a night before the sindoor khela and visarjan has 32 starters, five shorbas, and a dozen different meat dishes to choose from. The meat khichuri and labra which is a mélange of vegetables and meat can be duly credited to the Gorkhas. Such is the reverence of the barbeque emperors of the armed forces that it is usually said that you can put a Gorkha in a desert and he will come up with a meal that fits the warrior king. Grilled liver bites, and boti xaak curry are few of the dishes that the regiment brought to the Army get-together menu. In fact, the buffalo barbeque served laced with the broth reduction is perhaps the best Gaul meal that one would find in this part of the world. And of course the kebabs and mutton chop pilaf – a Gorkha original.

Today, in army regiments where the Durga Puja is held, the second last day’s sacrifice and cooking is done usually by the Gorkhas, in their own unique barbeque style.

So how did the local beliefs of the Gorkhas take the form of the five-day Durga Puja? The credit is shared partly by the Bengalis and a little more by the Nepalese. It was through that influence that an idol-less puja that celebrated the creator and offered a chance to ‘restart’, transformed into a ritual to bring the society together take on newer ideas suit the times.