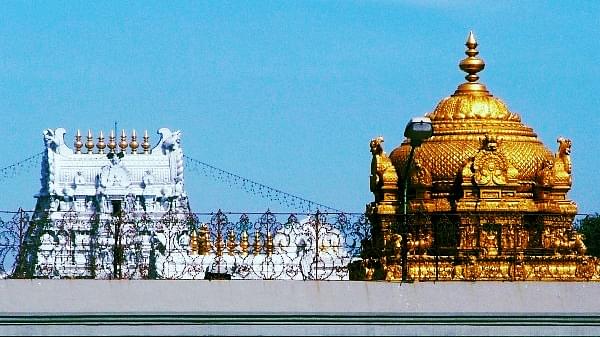 One of the earliest and most heard arguments in favour of large, wealthy temples has been that they nurture a local ecosystem, provide patronage for merchants and artisans, and generally act as an economic engine of the region. All this, of course, in addition to their original role as places of worship and grand projects of power projection for the reigning monarchs.

The ‘temples as economic engines’ argument, while perfectly valid, has almost never been explained to the general public in detail with data and examples. We attempted to look for ways to do this and found our answer in a paper titled ‘The Economic Function of a Medieval South Indian Temple’ (1960), authored by Burton Stein in The Journal of Asian Studies. Stein was a well-known historian who specialised in India with some notable works on the Vijaynagar and Chola empires. This particular paper that we will now discuss appears to be an adaptation from his PhD thesis on the economic functions of the Tirupati temple.

The paper looks at a crucial period in the history of the Tirupati temple, i.e., from the times of Krishnadevaraya to the fall of the Vijayanagar empire after Achyuta Deva Raya and Sadasiva Raya roughly for a significant part of the sixteenth century (1509-1550). Benefiting from the then newly translated inscriptions (some 1,000 had been translated and published) from the temple complex, the study also maps the flow of money through the local ecosystem and provides a clear picture of the temple economy and management.

Not surprisingly, the paper also notes the very efficient and near-professional management of the temple. Acting both as investing officers and administrators of the temple, it seems as though the seeds for the enormous wealthy status of Tirupati were sown during this crucial period of the great rayas of Vijayanagar. The temple had been receiving endowments from powerful south Indian royalties as early as tenth century, but we will restrict this study to the later Vijayanagar period.

It all began with the most powerful and well-known emperors of Vijayanagar, Krishnadevaraya himself. An ardent devotee of Lord Vishnu, the emperor composed many a work of devotional poetry – the amuktamalyada in particular. During his reign, nearly 20 villages were made over to the Tirupati temple as land grants. A further 90+ villages would be provided as grants to the temple in the next four decades.

These land grants came in multiple forms. For crown lands and a tenure type referred to as service tenure, a major portion of the harvest was due to the temple with a minor portion going to the cultivator. There were other forms of grants in which only a specific income from the lands, and not ownership, accrued to the temple. Excepting such grants, the major portion of villages endowed to the temple could be fully managed by the temple authorities.

The other way to give to a temple was through large monetary endowments. Such endowments were usually made in lieu of certain rituals being performed in the name of or on behalf of the donor. The temple had the authority to invest the money and seek returns from it in order to sustain the ritual annually.

The combination of endowed villages and monetary contributions allowed the temple authorities to invest in long-term capital expenditure and nurture an economically vibrant ecosystem around the temple region. Inscriptions cited by the authors of the “Economic Functions…” paper demonstrate how the temple went about doing just this.

Since you paid the sum of 15,000 nar-panam into the temple treasury this day for the purpose of propitiating Sri Malaikuniyaninra-Perumall with 300 appa padi yearly as your offering-we shall utilize this sum of I5,000 nar-panam for the improvement of tanks and channels in the temple villages and with the income obtained thereby, the above mentioned 300 appa padi shall be prepared and offered

The above offerings of appa-padi (fried rice cakes) are to be costed at six panams (the currency in vogue) each. This would mean the temple would incur a cost of 1,800 panams for producing/procuring the appa-padis necessary and this amount must be generated fully from the capital available of only 15,000 panams, a return of investment of 12 per cent per annum.

The authors of the paper have similarly attempted a calculation of returns on other grants and found that “the average annual return on monetary endowments as measured by the value of the service performed for the money donor was about I0 per cent for the years 1535-47”.

The temple, it must be remembered, is only one of the beneficiaries of this investment. The land tenure system meant that a good portion of the crop or return generated on temple lands was shared with the cultivator or the village population. So while the temple invested in public goods such as irrigation and tanks, it took back only a portion, even if it were the larger portion, of the returns on such investments, leaving more wealth in the hands of the cultivators. Accounting for the share given to the cultivators, the temple might have seen returns ranging from 10-20 per cent on its investments, a figure that would be difficult to beat in today’s government-run temple ecosystems.

Having studied the available literature of around 1,000 inscriptions, the author points out the nearly professional and proficient manner in which the temple authorities carried out their investments and wealth management. The paper cites how temple functionaries and local merchants continued to make large endowments to the temple over decades – a direct vote of confidence in temple authorities and an investment in the economic ecosystem they operated in. For example, in between 1542 and 1568, state donors constituted only 20 per cent of the total endowments. Citizens and merchants of Tirupati contributed 28 per cent, 8 per cent more than the royals. Temple functionaries contributed 23.5 per cent in the same period. Clearly, it wasn’t always about royal patronage.

The increase in monetary endowments also had something to do with the politics of the time. It is conjectured that the nearly three-fold increase in monetary endowments, mainly from military and state officers, after Krishnadevaraya’s reign could have been the result of vast accumulation of wealth during the victorious campaigns of the emperor in the preceding 20 years.

Once again in the last few years of Krishnadevaraya’s successor and half-brother Achyutadevaraya’s reign, we see a massive spike in endowments by military and state officers who profess loyalty to their emperor. The author of the paper points out that a majority (three quarters of them) of these endowments were made during a period of open conflict for the throne between the emperor Achyuta and Ramaraja, Krishnadevaraya’s son-in-law. Thus, endowments and inscriptions recording such contributions may also have been political statements.

If the state could exploit endowments to make political statements, the temple functionaries and local merchants used endowments for further wealth creation in the temple.

Apart from royal endowments, local merchants and temple functionaries stepped up with contributions in return for which they sought the rights to sell the temple prasada (consecrated food) to visiting pilgrims. Ritual functionaries such as those employed in educational institutions (mathas), temple reciters of sacred Tamil and Sanskrit works, teachers, scholars were eventually dependent on being able to monetise the consecrated food produced in the temples:

This dependence is made clear in an inscription of 1467 in which the temple functionaries of the major shrine of Sri Govindarajaswami in Tirupati requested that “. . . they might be permitted to distribute among themselves the prasada offered to Govindarajadeva, similar to the practice at Tirumalai [i.e., the shrine of gri Venkatesvara] so as to maintain themselves therewith…

Tirupati was South India’s foremost temple under the Rayas, and the royal patronage, apart from other endowments, continuously brought more pilgrims to the temple. There must have naturally been a good demand for the consecrated food, and inscriptions show there was indeed trade based on arrangements and leases:

The ability of the temple to convert consecrated food (which had been paid for by earlier endowments) into money was quite important, leading to the temple functionaries themselves being able to contribute one-fourth of all endowments to the temple between 1509 and 1568.

Thus, between the royals, state donors, temple functionaries, temple villages and pilgrims, the temple was able to get a virtuous cycle of endowment, investment, trade and attractive rituals going. Endowments and land grants allowed the temple to generate large capital that was invested in smaller temples, which would attract more pilgrims. Devotee welfare too seems to have been covered with the building of feeding houses and rest houses.

There is something to be said about the temple functionaries and management during this period of extraordinary growth. More than a 100 villages had been endowed to the temple under the reigns of Krishnadevaraya and Achyutadevaraya. Apart from this, the capital generated from enormous amounts of investments made and new institutions being commissioned must have multiplied the workload of the temple management.

Throughout this century of expansion, the core management of the temple was left to a team of 12, an arrangement that was more than two centuries old by then. Further, as new institutions and responsibilities piled on, the paper notes, a slightly more relaxed and decentralised management structure began to take shape. New institutions were mostly self-managed with their own managers, treasuries and such. The main Tirupati temple appears to have even made permanent endowments to the new institutions, whose returns did not accrue to Tirupati.

When looked at it from four centuries away, the efficient management of over a 100 endowed villages, hundreds of endowments and all the associated trade related to the temple almost seem unbelievable.

It would be impossible to see local merchants and the temple functionaries backing a temple with their own money today – a notable vote of confidence in the temple administration of fifteenth- and sixteenth-century Tirupati. Alas, if only some of this could be replicated in the twenty-first century, we may yet save the impressive heritage left to us by the great and the wise.

This article is part of Swarajya’s series on Indic heritage. If you liked this article and would like us to do more such ones, consider being a sponsor - you can contribute as little as Rs 2,999. Read more here.