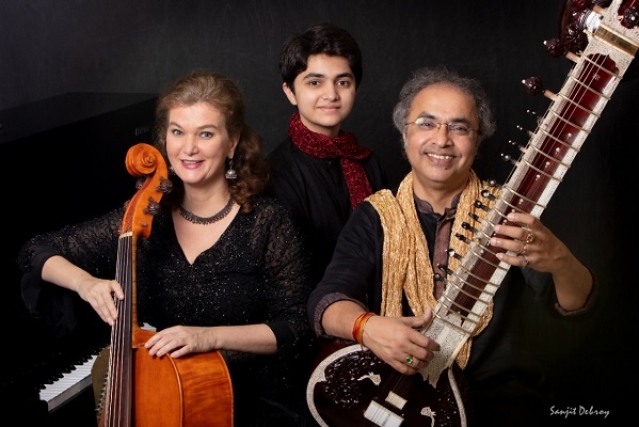 The interesting part about this concert is that it is part of a baithak series born during 2020: A year best known only for Covid-19 and is making the baithak as public in access as private it is and would remain.

In 2020, when one would have expected the concept of baithak, the private gathering of concerts and performance in music, to take a hit, the Raos gave it a new dimension and offshoot. They turned it digital.

The baithak series is named "Unlock the Music". The attendees (the audience) are present physically at the residence of the Raos (following the Covid-essential norms) as well as online.

The current scenario means that the numbers would be brought down to 20. That's when they thought of streaming the concert live on YouTube.

Covid-19 managed to muffle down the centenary celebrations dedicated to Pandit Ravi Shankar, in India. This author believes that the new effort from the Raos to propagate music, in the form of the baithak, which is reaching a new audience through the digital medium, is an unsung tribute to Shubhendra's guru.

In a short time, it seems to have unlocked more than just the opportunity or space to perform.

To know how, let's revisit the concept of 'baithak'. Baithak is a blend of a formal setting of music, and an open interaction in music, that takes the concept of 'sitting' to absorb the music in the realm of a private space. Baithaks have been a part of the journey of Hindustani music even in recent decades.

They come to be known by the name and the organising legacy of the hosts, who are either musicians themselves, connoisseurs, or aficionados.

Some baithaks have acquired repute over the decades, and have been known for the artistes they involve. Others, for the seasons and festivals they celebrate. The gathering becomes like a close knit family that is bound by music or the love for or following for certain artistes. 'Unlock the Music' series is shaping its own legacy.

Adversity is a good propeller. Beginning March 2020, the performing arts scene has witnessed several changes. Storytelling got a new lease of life and dimension, added vigour in the classical performing arts.

It seemed as if storytelling was waiting for the mask as an agent provocateur, so it could find more voice, expression, frequency and force, just because it was (temporarily) under threat. It wasn't surprising to see the beauty of the new strengths in the story telling making way to the 'Unlock the Music' series.

In December, Dr Sonal Mansingh performed the 'Krshna-natya Katha'. There was a sense of homely comfort to the dais. Curtains drawn at the back, Sonal ji sat on a cushioned stool to be the kathakaar.

She retold the eternal story of Krishna, taking up various episodes from his life in a style that's so deeply integrated in the performing arts, yet often stands ignored.

A retelling of the episode, a dialogue between Krishna and the wife of the Kalia naag, based on the poetry of Narsinh Mehta (Narsi Mehta) — 15th-century poet-saint of Gujarat — was a rare exploration.

Hastha mudras, abhinaya as propelled by her conquering eyes and face; her verbal storytelling, humour, her pointed insight into inclusion and exclusion, all these came into play during this session. The baithak comfort enhanced these aspects.

The opening concert in the series was by Ustad Wasifiddun Dagar. He used the space to strike a refreshing beginning to the lec-dem style, which is his strong point, and deserves such spaces and opportunities ten times over.

The arrival and sprawling of Covid-19 was a potent threat to the classical performing arts scene in India. The pandemic managed to stun the artiste fraternity by affecting the concert scene. The basic element of "sitting down" to observe and absorb music was the first to get eclipsed by the lockdown norms.

Amid the chaos of an eerie silence and anxieties, art broke the shackles of a new world order where the screen would become the dais. In 2020, artistes used the very principles in aesthetics and performance that the live concert scene was convincingly eroding (thanks to factors that are no more important to organisers), to connect with the audience.

Though the lockdown has given many artistes the time to create new and to learn, know and explore the online medium of imparting music, one of the byproducts was uncertainty.

They are a family of three artistes, (including their son, Ishaan, who is evolving as a musician and composer, and plays sitar and piano). Amid the lockdown, they were beginning to figure out ways to resume their music-centered interactions.

Shubhendra Rao says that they were "beginning to starve for live concerts". The couple performed in the fourth concert in the series to a compact audience.

The "starving" for live concerts in their contests would mean "performing", listening, the preparation for concerts, going in and out of greenrooms, and other related aspects.

Shubhendra himself would return to the first live performance in Delhi during the last week of December.

This came after concerts in Spain, dedicated to Pandit Ravi Shankar's memory and his 100th birth anniversary. But their baithak is becoming quite the central point in their musical journeys (the physical ones now) and can go on to inspire several other artistes to make such beginnings.

In the Covid-19 scenario, the aspect of "listening" of (and in) music has undergone several changes. The dispelling of the voice and music discourse has more or less shrunk to a computer or a phone screen — from a full fledged auditorium.

The baithak concert system and its online sharing started by them saw the dais maintain its formal way.

We, the audience, face the performing artiste. The artiste cannot see us. This is the Covid-installed wall that will take time to recede.

Not very long ago, artistes would fondly ask the light controllers to help them have a glimpse of the audience before they begin performing. They would chat for a bit while seeking customary permissions to perform.

All those minute and precious pleasures seem to have been on a pause if not lost. The series is engaging new silences.

The baithak style is considered ideal for listening and absorbing the art. It offers a compact gluing of the teller and the listener. The telling and the listening then has a flow of performer and audience.

Baithak is a term or word used for defining the space — a formal setting where people "sit" together for thoughts, conversation or performance.

The setting and space, in the context of music and performance, takes the shape of a style.

It cuts the compact space from disturbance and distractions.

That's the first, tangible, positive outcome, for the audience at a baithak. In the pre Covid-19 world, baithaks would include aficionados, peers and connoisseurs — usually, a closed, tightly knit group, known to the artiste invited to a baithak.

Shubhendra and Saskia say that the baithak is the "perfect setting for both the audience and the artiste". They add: "...both the artist as well as the audience feeds off each other and the energies that are created. Traditionally, we have always had artists perform in such settings. It's only in the last 70-80 years that our music has gone to the concert stage and auditorium."

They want to make the concert series interdisciplinary and involve other forms of art involved and interspersed to develop it into a "private traditional soiree".

Naturally, the baithak — in the context of space — will be moving towards becoming a hub for all cultural activities, as the Covid-19 scenario improves.

The series will continue even as they travel for their own performance tours and concerts. Six such concerts in a year — their aim.

The Covid-19 scenario undoubtedly has given artists, particularly in India, the time and mental space to turn to the online medium for listening (on and to music).

It has made them aware of what needs to be done and improved in the use of the online medium in order to reach out to listeners and make music accessible to people. Glitches in the internet feed affect smooth streaming at times.

"People pay huge amounts to watch/hear pop music or watch films at the mall, the same people hesitate to pay even Rs 100 for a classical concert...Through this initiative, we want to try to change this mindset," Rao told this author over email.

What would a good initiative to propagate music be without documentation? Saskia is documenting the concerts and channeling the documentation towards education for children.

Shubhendra adds, "An absolutely unique feature of this series is the educational package that Saskia writes for every concert. Each concert comes with an e-book that is sent to the audience who signs up, and to schoolchildren. These e-books give information about the artists, about the style of music, their instruments and links where they can listen to the music."

They are trying to create an educated audience and for music teachers in schools. He adds, "...These e-books can be an extensive music education resource and each book can be used for at least two months of teaching. So this becomes a whole music enrichment programme for schools and children."

This would take education in music and documentation to the next generation, which is the core of their work through the 'Sangeet4All' programme. Education and baithak is one potent jugalbandi in connecting music with the masses.

Music flowing out from the true artistes' own baithak is of immense value for a reason. It is borne out of communication between peers in a common space and art during difficult times.

Clearly, now, its artistic purpose is not limited to 'helping fellow artistes'. The intertwining of narrative and storytelling unlocked during Covid-19 has brought back generosity that was languishing or unused in the pre-Covid concert scene. The narrative style of performing is taking new shoots.

On the occasion of the beginning of Basant 2021, it gives this author a reason to celebrate a new chapter in Hindustani music. Compulsions of the auditorium setting behind, at least in this space, artistes are using the time to "share" more than "show", "delve" more than "perform", "talk" more than "communicate".

The doors to this baithak and to the new paths it builds through the audience, must remain open.