In Photos: Continuing The Tradition Of Bhakti With Shakti - How Tamils Of Singapore Celebrate Thai-pusam 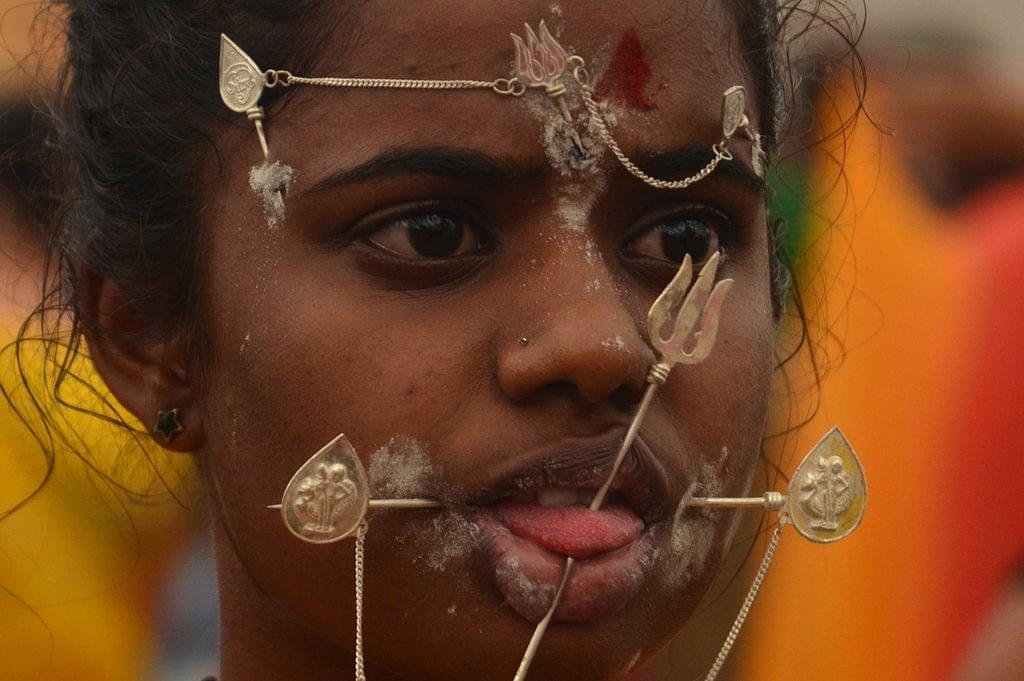 Smita Barooah had the chance to attend the annual thai-pusam festivities held in Singapore’s Tamil temples. She came back awestruck and slightly intimidated.

Recently I told a friend that I was considering moving back to India. His response was surprising. He said in all seriousness, “bring up your sons abroad. Let them preserve our traditions there.” Even as he said it, we both knew he was exaggerating, but I was taken aback. On reflection I understood that the statement was a reaction to the current debates in India.

Increasingly, it has become fashionable to oppose traditional Hindu rituals and festivals, in the name of modernity, citing various reasons. The opposition is led by a small but visible minority, who seek to impose their views on others.

People are told to have a waterless Holi, and a bonfire less Lohri to save the environment. They are lectured about how Karva Chauth and Raksha Bandhan are regressive and patriarchal. The ancient sport of Jallikattu, or bull taming, is sought to be banned on the grounds that it is cruel to animals.

The list is a long one, and I will not go into the merits of these arguments since it is an ongoing debate. But it was on my mind as I stepped out with my camera to see the Thai-pusam celebration in Singapore.

Thai-pusam is a festival celebrated by the Tamil community in India, Singapore, Malaysia and Mauritius. Most Indians outside Tamil Nadu have perhaps never even heard of it.

The festival is dedicated to Lord Murugan (Skanda) and marks the occasion when his mother Parvati gave him a “Vel” (spear) to vanquish the evil demon Soorapadman. It falls on a full moon day, in the Tamil month of Thai (January or February).

Devotees undertake a pilgrimage to a Murugan temple by carrying pots of milk and kavadis (burden). The kavadis are semicircular canopies made of wood or metal frames, and are borne on the shoulders.

Many kavadi bearers pierce their bodies with spears and hooks to please the deity. To prepare for this, they fast for approximately 48 days before the event and eat “sattvik” (lacto-vegetarian) food to cleanse their bodies. During that period they pray and chant the Kandha Shasti.

Men carry the canopies while women carry milk pots. It is not uncommon to see some women with shaved heads, and spears through their tongue and cheeks.

This year, I made my way to the Perumal temple, where the preparation for the journey begins. On the main road, a section was cordoned off for the bare feet kavadi bearers, who would walk five kilometers to the Murugan temple. The process would end with milk “abhishekam” (ritual bath) of the deity. The entire path was lined with onlookers, volunteers and security people.

Inside the temple there was frenetic activity. Various groups staked territory by placing their prayer offerings, and materials to assemble kavadis. There was deafening music from the drums and nadaswarams. Some people were starting the ritual prayers before the piercing; others were decorating the bodies of kavadi bearers with various hooks and spears, while screaming mantras. One man calmly ate fruits as he was being pierced. Another stood on spiked sandals, adjusting various hooks.

Those who were ready with their kavadi finery danced in frenzy, as they headed out on their pilgrimage. A few dragged small chariots with chains hooked to their backs. Tourists took photos with their mouths agape. Locals sat calmly watching the proceedings.

Reeling from the visual overload, I wove my way into a less crowded corner and met Prakash. He was going to carry a kavadi for the 27th year running, having started at 16. When I enquired about the motivation, he said that he had made a vow for his parents, and would honor it for as long as he could. “Don’t you feel any pain during the piercing?”, I asked. “Of course it hurts,” he said, “but it is about mind over the body”.

Prakash explained that his kavadi would entail piercing the stomach and carrying a weight of over a hundred kilograms. Devotees choose how much weight to carry and how to decorate the kavadis, he explained.

Further ahead, there was the cheerful Kampong Bahru group. The members were from a close-knit community that had once lived in the same kampong (village). They have been taking part in the festival for over 60 years, and have passed on the tradition through generations. Males took turns by rotation, as thanksgiving for all of Murugan’s blessings.

“Why do you spend so much effort on decoration?” I asked one of their wives. “Murguan is like a child you see”, she explained patiently. “We are taking him a present to make him happy, so we must wrap it up nicely”.

Midway through the afternoon, it started pouring. No one cared. In a journey of faith, trivial matters like the weather clearly didn’t count. “It’s a blessing from the Gods”, they said.

As I head home, I marveled at how traditions lived on, so away from their points of origin. I had witnessed the enactment of an ancient ritual in one of the most modern cities of the world. Would such a tradition be allowed to survive in tomorrow’s India? Would there be respect for the choices and sentiments of these people, or would they be mocked as regressive and superstitious beings?

I came back awed with the discipline, willpower and sheer force of belief that guided this ritual. I can now say with conviction that while India as a nation may be going through a period of questioning and churn, India, as a civilization is alive and well.

Here are some pictures from the day.

1. A devotee performs a pooja to his kavadi before carrying it

2. A spiked sandal – some devotees carry their kavadi while wearing these sandals with nails pointing upwards

3. Lemons are hung by small hooks to a devotee’s back

4. A devotee decorates his kavadi – these are thought be presents to Murugan and are lavishly decorated

5. Notice a vel pierced on this devotee’s forehead.

6. An elderly devotee with vels pierced through his cheeks and his tongue – is seen carrying a kavadi – notice all the threads hung from hooks stuck to his body

7. A devotee holds up a kavadi – strings are hung by hooks pierced on his body

8. A devotee’s tongue is pierced with a vel – his cheeks has already been pierced.

9. Three vels have been pierced on this devotee’s forehead. The cheeks and tongue too.

10. Milk pots are also hung from hooks meant to tow small decorative cars/mini-chariots for the deity.