In Pictures: How Mangaluru Celebrates Dasara with Sharada 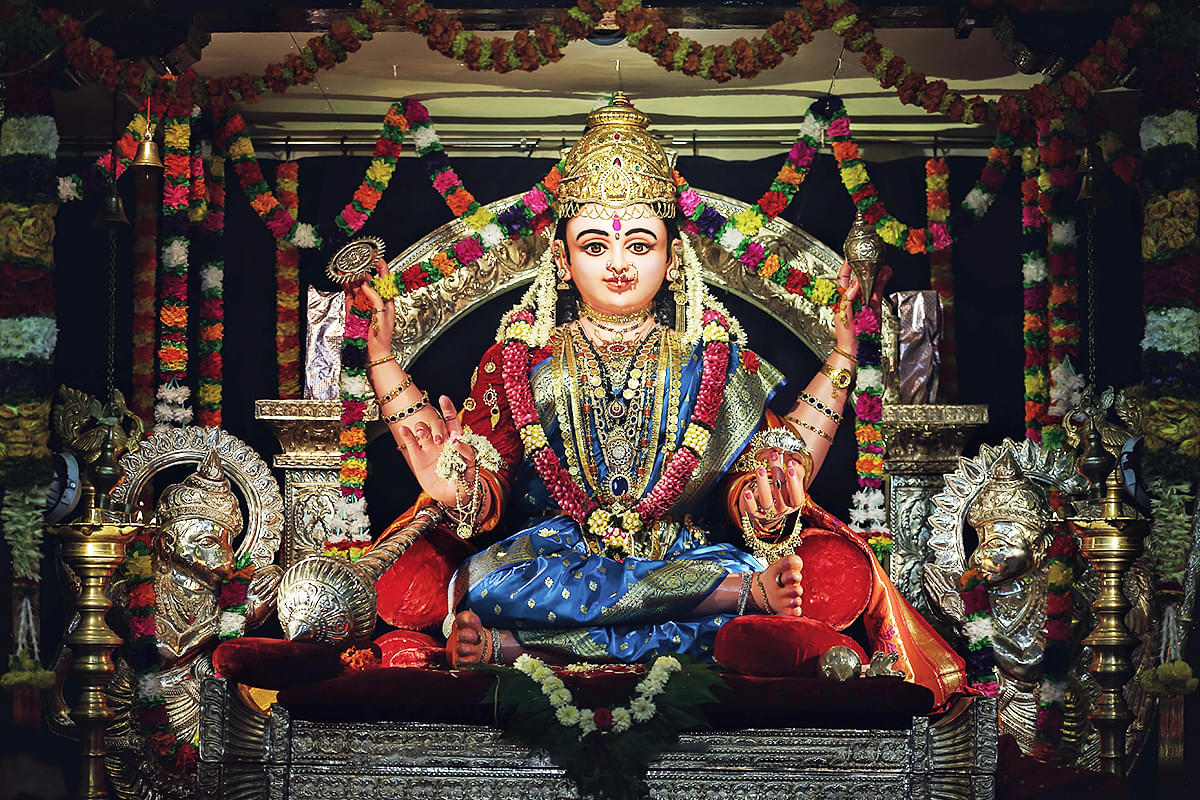 (So pretty so beautiful you be oh Mother Sharada, These two eyes ain’t enough to see you)

No words more befittingly describe the thoughts of devotees standing in awe in front of Sharada at the Dasara festivities in Mangaluru.

From the moment she arrives on panchami or the fifth day of the Navaratri to the dawn after Vijaya Dashami when she finally is immersed and sent back to her heavenly abode, Navaratri is one festival where the prettiest woman in the town is the Goddess in all her grandeur and glory.

Sharada Mahotsava is an annual celebration that has put Mangaluru on the tourism map during the Navaratri season, with Mangaluru Dasara being touted as second to the grand heritage Mysuru Dasara.

But this Mangaluru Dasara was an offshoot of the much simpler, humbler, traditional worship of the Sharada form of the Goddess by the Gowda Saraswat Brahmin community that migrated to the coast four centuries ago and carried their ‘saras-wati’ with them.

Within the premises of the Shri Venkataramana temple in the heart of the city, in the precincts of the Acharya mutt sits the first Sharada who will complete 100 years of celebration of worship next year.

The southern coast of Karnataka is dotted with many powerful ancient Devi temples. The city of Mangaluru also gets its name from Mangaladevi, the deity said to have been consecrated by sage Parashurama himself. And hence Navaratri was celebrated in all temples - it is also the annual festival of the Goddess Mangaladevi from whom the city gets its name.

But the Konkani speaking people who migrated from Goa in the sixteenth century to the land of Tulu speaking people on the southern coast of Karnataka are the ones who began the worship of ‘Sharada‘ in the form she is seen today.

For a long time after their migration, given that the language of the land was different and the community wasn’t financially secure to be invested in education, Saraswati Pooja was the annual worship of the scriptures and books that were relegated to the cupboards all year through, opines cardiologist, author and a Konkani activist Dr Mohan Pai. He was an active member of the organising committee that conducts the Sharada mahotsav for over three decades.

'Since we were invested in learning and education, tracing our history to the river Saraswati herself, it was only natural that we chose this form for worship,’ explains Dr Pai.

In 1922-23, a Sharada, whose image is closest to the conceptualisation of Saraswati by Raja Ravi Verma, was brought to life in clay.

Weighing almost 300 kilos, this Sharada idol in clay is brought from the makers space into the temple premises on the night of Panchami and on Mula nakshatra, she is consecrated and worshipped until Vijayadashami.

And this very idol is given various forms of Lakshmi, Saraswati, and even Kali through her ‘alankars’ upto the final day.

On the day of Visarjan, she adorns her most beautiful form with her hair decorated with a special jasmine decoration that is called the ‘sonphool’ in Konkani or ‘jalli’ in Tulu, is carried on an open pedestal adorned with lights in the backdrop and taken around the area by volunteers who observe all rituals to stay pure and ‘qualify’ to carry the ‘divine mother‘ on their shoulders. Earlier the procession conducted with handheld flames lighting the way, which was then in the succeeding years also accompanied by men holding gaslights - a tradition followed to this day, until the electrical lighting’s and generators to back them came around.

On the day of Visarjan, she adorns her most beautiful form with her hair decorated with a special jasmine decoration that is called the ‘sonphool’ in Konkani or ‘jalli’ in Tulu, is carried on an open pedestal adorned with lights in the backdrop and taken around the area by volunteers who observe all rituals to stay pure and ‘qualify’ to carry the ‘divine mother‘ on their shoulders.

There is a rhythm to the walk too, one which makes it look like a full-grown woman walking swaying gently in feminine grace.

And as she goes around the entire area, which was predominantly where the community had settled down around the temple, swaying to the rhythm of the traditional musicians who also walk along playing bhajans, humans sporting the tiger form dance in front all along the route.

‘There is also a story of how one Kanthappa vowed to be dressed as a tiger if his child’s life was saved from the tiger that was around it one night as he returned from the fields.

'It is said, the tiger went away, and hence since then, Kanthappa would dress up as a tiger and sit at the feet of the Sharada', says Dr Pai, recounting one local folk tale. There are similar tales of the tiger dance that we wrote about last Navaratri.

As she completes her large circuit and returns to the entrance of the temple, all those who vowed and performed various dances, are honoured and blessed with the 'prasada' after which she heads to the immersion lake.

Her arrival last night! Nothing matches her glory and her beauty !

A tradition of Sharada worship in this form that was brought to the region by Saraswats (GSBs) 99 years ago that has now inspired countless ones including what we today call Mangaluru Dasara! #Navaratri2021 pic.twitter.com/Qu8exsZBFh

That is a sight to be witnessed (watch last year’s Visarjan here) as each year, knowing very well that this is custom, tears well up in the eyes of the hundreds that gather in the precincts of the temple lake.

As she is seated atop the specially designed coracle, minus all her finery, adorned in a simpler saree and the flowers, and circumambulates the lake thrice, ’enta chanda enta Anda’ is heard playing on the saxophone aloud.

All the pulsating grandeur of the Navaratri slowly turns sombre, and the mood turns one of pathos as devotees watch her preparing to leave.

And with the final recitation of Vande Mataram, we see her off with moistened eyes slowly as she disappears inch by inch into the lake, promising to come back next year.