Remembering Maharaja Ranjit Singh: His Legacy Continues To Shape Our Nation Down To The Present Day 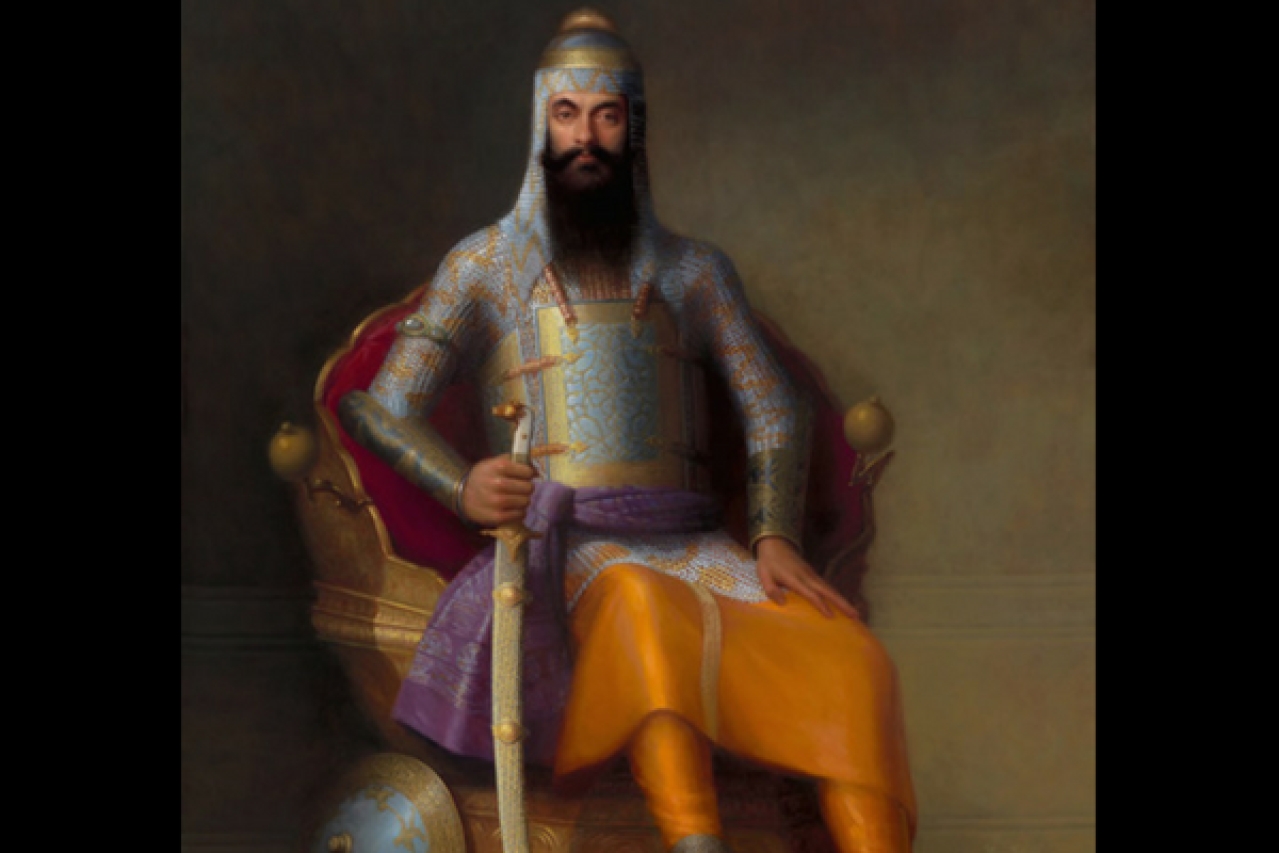 A portrait of Maharaja Ranjit Singh of Lahore

On 27 June 1839, Maharaja Ranjit Singh passed away in Lahore. For a man who began his military career as a 10-year-old, and became emperor at 21, Ranjit Singh’s achievements are awe-inspiring.

As a national icon, his story is by now well-known and barely needs repeating. What then does one do in remembrance of a man who has gone down in history as one of the greatest ever?

Perhaps, trace his legacy down to our day? Ruffle through the jumble of the present, to find a trail that leads to the Sher-e-Punjab?

No direct descendants of Ranjit Singh through the male line are known today. There are, however, collateral descendants and descendants of others tied to the Lahore Durbar through ties of matrimony who fought with Ranjit Singh in his battles and who helped build his empire that stretched from the Khyber Pass to the borders of Tibet.

Many of these, who trace their lineage back to the Lion of Punjab, have distinguished themselves in various fields. As one stumbles through this trail of lives, present and past, one realises that 179 years after his death, there is a lot of Ranjit Singh that has gone into the making of modern India.

Princely States of Dholpur And Nabha

Dholpur in Rajasthan and Nabha in Punjab are two erstwhile princely states whose rulers can claim descent from Maharaja Ranjit Singh through his great-granddaughter, Maharani Harbans Kaur.

The trail from Lahore takes a detour through Rae Bareli in Awadh before it reaches Dholpur and Nabha.

Rani Dakno Devi, daughter of a Zamindar of Kangra, was the wife of Maharaja Sher Singh, the son of Maharaja Ranjit Singh and the fourth emperor of the Sikh empire in 1841.

The marriage produced one son, Shahzada Bahadur Shah Dev Singh, who survived the murderous infighting among the Lahore nobles as well as the two Anglo-Sikh wars, only to be banished along with his mother to Rae Bareli where they were kept as prisoners of the East India Company.

While the Maharani died shortly thereafter, the Shahzada made the best of his constrained circumstances, adding to the lands that they had been given as a pension, and founded the estate of Badri Ganeshpur on the outskirts of Rae Bareili.

In 1879, Maharani Harbans Kaur married Maharaja Nihal Singh of Dholpur in Rajasthan. Their son, Maharaja Udaibhan Singh, was the last titular head of Dholpur. The estate of Badri Ganeshpur too became part of Dholpur as a result of this union.

Since Dholpur was now left without a male heir, one of the sons from this union was chosen as the heir to the throne at Dholpur. Thus, while Hanuwant Singh succeeded the throne of Nabha, Hemant Singh inherited Dholpur, the kingdom of his mother.

Maharaja Hemant Singh married Vasundhara Raje Scindia of Gwalior, although the marriage was short-lived. Raje was the Chief Minister of Rajasthan until December 2018. 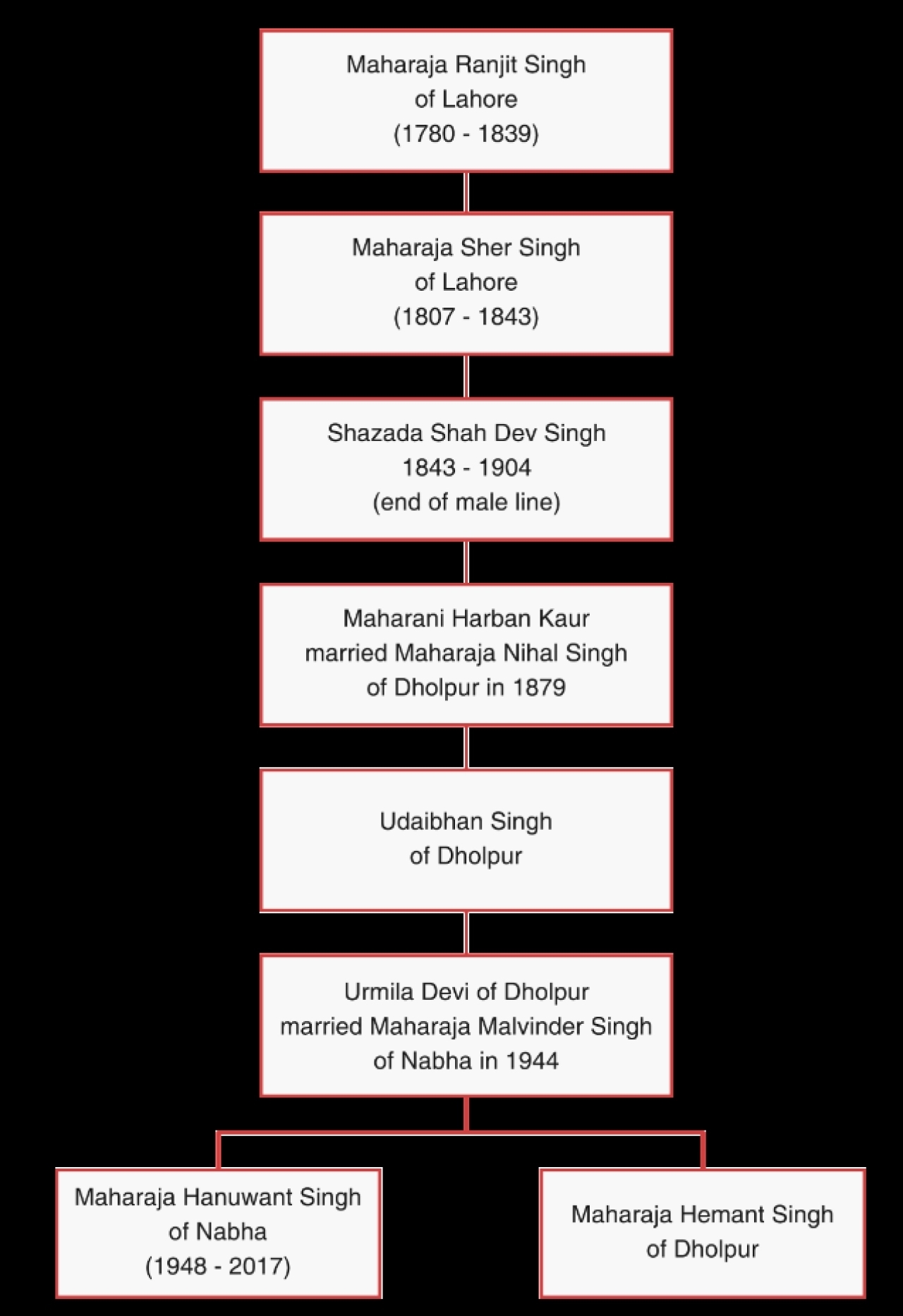 The line of succession from Maharaja Ranjit Singh

Some members of the family have even filed a lawsuit against the British government for the return of the Koh-i-noor diamond to them.

Their legal struggle might or might not bear fruit, but what does remain beyond doubt is the claim of the Sandhanwalias to a large part of Ranjit Singh’s legacy both as his kinsmen, as Generals in his army, and as kingmakers in his empire. They helped him build his empire and rule it too.

The Nakai family occupy a prominent place in Sikh as well as Indian history, being one of the 12 Misls or Republics that ruled the Punjab after the collapse of the Mughal empire.

At their peak, they could muster 7,000 armed horsemen on the battlefield. Ranjit Singh’s genius lay in bringing all the 12 Misls under one banner. The Nakai Misl ruled over the area that today corresponds to the districts of Okara, Kasur, and Dipalpur in Pakistan, having battled the Afghan and Mughal overlords of Punjab to claim these lands.

Though not related to Ranjit Singh by blood, the family cemented their ties with the Lahore Durbar through marriage. Maharani Datar Kaur, a princess of the Nakai clan became the second and the chief wife of Ranjit Singh, with her son and her grandson succeeding Ranjit Singh to the Lahore throne in turn.

Down to the present day, the most distinguished member of the Nakai clan was the late Lt Gen Jagdishwar Singh Nakai. He joined the Indian army just when the Second World War broke out and served in the Burma Campaign.

He was later to see action in all subsequent wars of independent India till his retirement in 1979 after serving as the General Officer in Command, Central Command. Lt Gen Nakai was a recipient of the Param Vishisht Seva Medal.

Unlike the Nabha-Dholpur royals and the Sandhawalia clan, the Majithias do not share any blood ties with Maharaja Ranjit Singh. Nor like the Nakais did they enter into major matrimonial alliances with the Lahore Durbar.

However, there does not exist any other family in the history of the Sikh empire who exerted as large an influence over Ranjit Singh’s army as the Majithias.

Between 1800 and 1845, no less than 10 Majithia Sardars are recorded as having served the Lahore Durbar as Generals. The chief among them was Sardar Lehna Singh Majithia, who distinguished himself during campaigns at Lahore and Peshawar.

The Majithia Sardars belonged to the Shergill clan and originated from the village of Majithia near Amritsar after which the family would, henceforth, be identified.

Since the time of Ranjit Singh, they have had an almost unbroken record of producing some of the leading figures in practically every field of human endeavour – from the armed forces to the arts, from commerce to agriculture, from diplomacy to politics.

It is hard to find another family that has contributed so much to the building of modern India as the Shergills of Majithia have.

The most famous scion of the family is the painter Amrita Shergill, who is credited with bringing about a renaissance in modern Indian painting. She was declared a National Treasure Artist by the Government of India in 1976 and all her works are preserved in the National Gallery of Modern Art in New Delhi.

Sardar Umrao Singh Shergill Majithia, a renowned scholar of Sanskrit and Persian as well as one of the earliest Indian amateur photographers, was her father. Umrao Singh Shergill began taking photographs in the 1890s, when the first cameras had only just begun to arrive in India, and is considered to be among the pioneers of photography in India.

The grandson of Sardar Umrao Singh Majithia was Squadron Leader Surjit Singh Majithia, who served in the Royal Indian Air Force during the Second World War.

During the 1943 Burma Campaign of the Second World War, seven squadrons of the Indian Air Force were ordered to proceed to Burma for operations from Delhi.

After retirement from the IAF, Squadron Leader Surjit Singh Majithia served as the first Indian ambassador to Nepal from 1947-49. From 1952-1962, he served as the Deputy Defence Minister of India.

Squadron Leader Majithia’s grandchildren are the politicians Bikram Majithia and the Union Minister Harsimrat Kaur Badal. The actor Jimmy Shergill is from the Majithia clan too, being a grandnephew of Amrita Shergill.

Another prominent scion of the Majithia family was Sardar Dyal Singh Majithia, founder of the Punjab National Bank as well as of The Tribune newspaper.

The son of General Lehna Singh Majithia, who had helped conquer Pashtun tribal territories near the Afghan border for Maharaja Ranjit Singh, Sardar Dyal Singh Majithia was a prominent philanthropist and social activist.

The first meeting of the Punjab National Bank was held at his house in Lahore on 23 May 1894 and being its founder, he was elected its Chairman. He was greatly influenced by the Brahmo Samaj and believed that in education lay the emancipation of Indians from colonial rule.

To this end, he founded the Dyal Singh colleges – a chain of three colleges in Lahore, New Delhi, and Karnal. The Dyal Singh College in Delhi has established itself today as a prestigious educational institute under the University of Delhi.

The Dyal Singh College in Lahore is still running from its original premises founded in 1910 on the personal estate of Sardar Dyal Singh Majithia.

The town of Attari, close to the Indo-Pakistan border, is famous today as the last railway station on the Indian side of the border. Before the partition of India, it was also famous as the home of one of the greatest generals of the Sikh empire, Sham Singh Attariwala.

Sham Singh Attariwala led Sikh troops in almost all their campaigns from Multan to Attock to Kashmir. However, he is best known in history for his famous last stand at the Battle of Sobraon fought in February 1846 as part of the First Anglo-Sikh War.

Sikh troops led by General Sham Singh Attariwala found themselves trapped when a bridge they were crossing over a flooded Sutlej collapsed. Surrounded by the British and left as sitting ducks in the flooded Sutlej, none of the trapped Sikhs attempted to surrender.

Led by Sham Singh Attariwala, they fought to their deaths. The battle was lost but the Attariwala name lived on in history.

The daughter of Sham Singh Attariwala, Sahib Kaur, was married to Maharaja Nau Nihal Singh, grandson of Ranjit Singh who had a brief reign of one month as the King.

The plucky fighters that they were known to be, it was inevitable that the Attariwala men distinguish themselves in the armed forces of independent India. Two members of the Attariwala clan are recipients of the Sena Medal – Col Kuldip Singh Sidhu and Col Gurbans Singh Attariwala.

Besides Lt Col Kuldip Singh, who served in the 1962, 1965 and 1971 wars, Brigadier Jasbir Singh Attariwala and Col Harinder Singh Attari too have served the Indian Armed forces with distinction.

The family maintains a trust in the name of General Sham Singh Attariwala to preserve his heritage. A memorial to the great General exists at the War Memorial in Amritsar.

To remember an icon of history does necessarily involve remembering the great deeds that earned them a place in history. But history itself does not end with the deaths of such men.

The true measure of greatness is had by judging how the departed reach down through history to shape our present. The geo-political and strategic achievements of Ranjit Singh have helped shape the contours of modern South Asia as we know it today.

The intangible heritage of the empire of Ranjit Singh is, perhaps, equally significant and it continues to shape our nation down to the present day.

This article was originally published in 2018.

Get Swarajya in your inbox everyday. Subscribe here.
Tags:
241 Shares