The Stories Behind India's Run 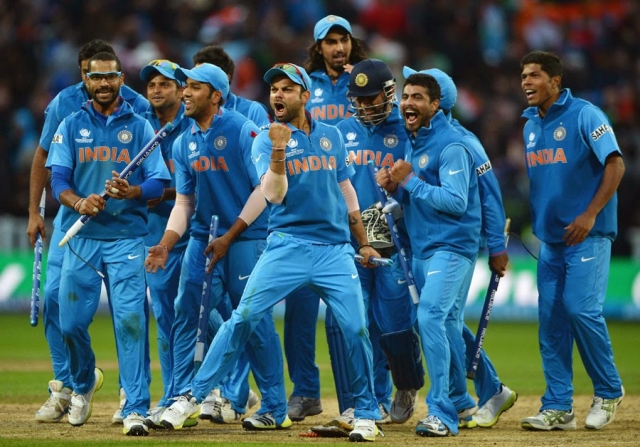 Looking at the rival’s intimidating capabilities with awe misses two vital aspects about them. Their management has hit a rough patch of late, and chinks in the team’s armour got exposed in the match against New Zealand.

After nearly a month and a half that has, for the most part, been more of a festive carnival than a keen contest, the ICC’s marquee event — the 2015 Cricket World Cup — has whittled itself down to the four most prolific and deserving ODI teams of the day.

So wide is the gap in the ODI format between the four contenders and the rest that the 46 preceding matches have resulted in a final four that nearly all pundits had predicted at the outset. The two semi-finals are also neatly arranged to ensure that the finals will be played between a team playing one for the first time ever and another looking to add one more notch to its previous successes.

The second semi-final at the Sydney Cricket Ground between Australia and India, is a clash between two sides looking to add to the trophy cabinet, and with a history of turning up for the big games. Australia has done so over an extended period of many decades, but less emphatically in the recent past, while India has only begun to rack up an impressive list of successes in ICC tournaments under its current captain. Will these histories count for anything? Will Australia’s home advantage prove too much or will the immediacy of the burden of expectations stifle their game — as has been the case for every other host but India in previous editions of the World Cup?

As two teams brimming with a line-up of match winners are matched head to head, it’s evident that a potent mix of opportunity and wary trepidation will test the nerves and resilience of both. Here’s a look at the variables in play — from an Indian perspective.

The mostly deserved cliché about this Indian side is that their batting is their strong suit. Australia, on the other hand, possesses, on paper, an enviable balance of talent across both batting and bowling. Given the extremely high fielding standards both teams display, this would appear to give the home team a decided advantage going in to a winner-takes-all game. The current form of the two teams, however, paints a much less clear picture.

That India’s bowling performance has been a revelation has, with very good reason, become one of the most oft-repeated statements of the cup. Several things make the resurgent performance of India’s bowlers remarkable. This performance comes with field restrictions that are set to be reversed after the tournament because they skew the game too blatantly in favour of batsmen; Two Indian bowlers who have been sure picks in recent years — Ishant Sharma and Bhuvaneshwar Kumar — are both recovering from injury and India’s spinners had failed to impress in Australian conditions in the Test series with the hosts and the ODI tri-series that included England.

Often coming-of-age stories in Indian cricket have been built around flamboyant batsmen learning to adapt their game to conditions foreign to them. This is perhaps the first instance that no less than five bowlers of promise have each shown the discipline and self belief to summon the will to find their best game in foreign conditions. In Mohammad Shami and Umesh Yadav, India have two very exciting quick bowling talents. While the former had hit a wall with a staleness creeping into his game, the latter was often a misfit in the shorter forms of the game. A more efficient run up has rejuvenated Shami, and Yadav has added the extra dimension of discipline to his ability and natural athleticism.

Mohit Sharma, a last minute addition after the injury to Ishant, has utterly transformed his captain’s attacking options as a first change bowler with tight lines and commitment in the field. While Ravindra Jadeja sticks to dutifully delivering the lines and lengths Dhoni tutors him through from behind the stumps, Ravichandran Ashwin appears to have rediscovered that, all his remarkable variations apart, he is the most threatening while these variations remain the proverbial icing on, essentially, an off spinner of great skill and strategy.

That these subtle, mental and technical changes in approach have come under the tutelage of Indian coaching staff is yet another aspect of this rejuvenated team that deserves acknowledgement and deeper analysis. Another aspect of Indian Cricket that appears to be coming of age!

On paper, less separates the top six in the batting line-ups of these two teams. The Australian team does enjoy an advantage in batting deeper but this (tellingly?) did not seem to keep them from succumbing to pressure when they faced their most high pressure league game against their trans-Tasman sea cousins and co-hosts New Zealand. The Indian batting line-up has, in contrast, already recovered from passages of play that went against them in the course of this tournament. While a similar recovery will be tougher against an Aussie attack of great skill and ability, the recent experience of having done so will be a plus. Under Mahendra Singh Dhoni, the Indian team has turned back the clock on the old adage that the right top six are enough for every conceivable challenge.

David Warner is a big game player who hasn’t fired in recent contests after some success early in the tournament. He has the game to bring to a high pressure environment and the positivity of approach to seek out challenges; it will need discipline from the Indian seamers to keep him in check. India, on the other hand, will draw some confidence from the upward trend in returns on the, often frustrating, talent of both their openers. Shikhar Dhawan and Rohit Sharma are both confidence players who have had recent innings that should bolster their self-belief. That they have both made centuries on grounds with longer square boundaries will stand them in good stead at the SCG. The fact that two of India’s most bankable young batting stars — Virat Kohli and Ajinkya Rahane — are due a big score must add to the team’s confidence as well.

Several subtle parallels run through a comparison of the two sides and this extends to two key figures in each management group — and their impact on results. Darren Lehmann and Ravi Shastri are both throwbacks in the modern game, to an era when “men were men” and several other clichés abounded. For all the modern emphasis on diet, training and support staff twice the size of the playing eleven, both men have had much greater impact on their respective sides since they joined the teams. While Shastri’s input to a transformation has been more recent, Lehmann’s, after a honeymoon period, has started to result in some rumoured friction with the Australian Captain.

In the aftermath of the Phil Hughes tragedy, Michael Clarke admirably channelled the sincerity and emotions of the larger Australian Cricketing community and its people — and was widely acknowledged for having done so. He is, however, far from the most unanimously popular Australian captain there has ever been. His falling out with Simon Katich, open friction with several players — most notably with Shane Watson — during the last Australian tour of India, recent friction with selectors and the somewhat unjust removal of George Bailey so he could be included in this side, all point to a tension that clearly still remains in the Australian dressing room, though the usual closing of ranks in Australian Cricket means that the slightest hint acknowledging this will only emerge, should the campaign fail.

Which brings me, of course, to the single greatest intangible that India have in their favour in this contest — the leadership of one Dhoni. Volumes of praise — and criticism — have been written about the man that I feel no particular compulsion to add to further. Nonetheless, there are some aspects of his leadership that demand reiteration: He has instilled self-belief, encouraged self-expression and empowered self-awareness in his team — in his own self image.

India arrived at this World Cup on the back of performances not befitting the tag of defending champions. They faced two high pressure games as their first two challenges: one against the hype of a traditional rivalry and the second against one of the pre-tournament favourites. This was the sort of banana peel that has been the undoing of many a campaign. India rose to the challenge with emphatic victories. It’s now back to two high pressure games once again. Perhaps the most remarkable currency this Indian team brings to the table is the ability of its leader to absorb and deflect pressure, and the willingness of the team to buy into that approach and act in his image.