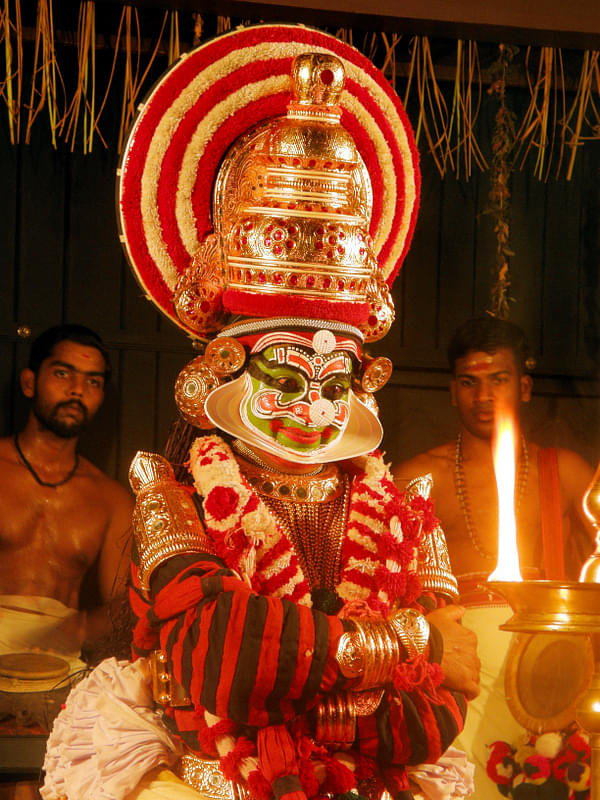 This past summer I had the pleasure and privilege of attending some amazing concerts by some of the leading lights of Indian classical music and dance. These events were part of the 2nd International Convention organized by SPIC-MACAY and held at Indian Institute of Technology, Madras(IIT-M)

While the whole experience of immersing into the vast and deep ocean of Indian classical performing arts was magical and each of the performances brought home for the audience a unique aspect of Indian classical and folk traditions, here I highlight one specific aspect that I personally found insightful and deeply satisfying.

Very briefly, founded in 1977, SPIC-MACAY (Society for the Promotion of Indian Classical Music and Culture amongst Youth) is a voluntary movement with a unique mission to provide Indian youth with a meaningful exposure to Indian cultural heritage through various forms of classical music, dance, theatrical arts, as well as a wide range of folk traditions in these art forms.

They do this by organizing thousands of lecture-demonstration programmes throughout India at various colleges, universities, inter-college/university cultural festivals, as well as several higher educational institutions abroad. I have had the privilege of attending several such programmes in India and abroad.

A typical SPIC-MACAY lecture-demonstration is a bit more casual performance, with an aim to bring out some salient features about the particular art form for the specific purpose of facilitating some learning by the audience, especially the youth attending the programme.

Before the performance, the performer generally gives a brief explanation about his or her specific art form and speaks directly to the young audience to engage  with them meaningfully in some of the nuances and unique aspects of the art form they are about to witness.

Of course, each performer individualizes this approach based on his or her nature, style, the demands of the particular art form, the nature of the specific performance he or she is presenting, and many other factors. There is no one right formula. Quite Indian in a way.

At the concert of Pandit Vishwa Mohan Bhatt, the great Mohan Veena player, we got to hear about and experience the aspect of speed. Yes, speed. Panditji in his brief comments before the performance said that one of the misconceptions some people, especially the Indian youth, have about Indian classical music is that it is quite slow and therefore boring.

He said that that’s why perhaps they keep themselves away from Indian classical music. Emphasizing that while Indian classical music can match any other musical tradition when it comes to speed, Panditji made an important point that in Indian culture music has been considered a means to connect with the silence within.

So its purpose is not to give the audience or musicians a “high” but rather to gradually facilitate a slowing down of their inner movements (thoughts, sensations, feelings, everything) and bring them to a place where they can experience a quietude within. And this led him to explain the role and significance of Ālap in a typical Indian classical music performance, both vocal and instrumental.

Accompanied by the noted Tabla player Pandit Ram Kumar Mishra, he then went on to demonstrate what he was explaining a few minutes earlier. He played raag Maru Bihag and mesmerized the audience, especially the young ones, by the great intensity and the high ‘speed’ in some portions of his performance (after ālap, of course). The music was absolutely captivating and enthralling, to say the least.

He didn’t seem to mind when the young audiences applauded and clapped in between to show their appreciation for the particular notes he played and the amazing skill with which he played them.

This is an important point because such applause in the middle of Indian classical music performances is not considered appropriate, and there have been instances of performers getting very upset over such behaviour from the audiences.

It seemed to me that he perhaps even played a bit to the young audiences when he saw them getting so enthused over his music.But all this didn’t take away anything from the key point Panditji wanted to illustrate through his performance.

That Indian classical music, despite its vigour and high energy, is primarily meant to help the listener and the musician connect with something much deeper, much quieter within, something that can be felt or experienced only when all the extraneous movements of the various parts of the outer being – physical-emotional-mental nexus – are sufficiently slowed down and the chaotic noises arising from them are silenced.

That’s what this experience was for me, and many others I suppose. A few minutes into his performance, it seemed as if the audience didn’t matter, the slightly uncomfortable chair didn’t matter, and even the interruptions from the youngsters in form of applause didn’t matter. The eyes were closed and it was only music. Only music.

Slow does it. Indeed.

Panditji concluded his performance with a track from his Grammy-award-winning world music album, A Meeting by the River (with Ry Cooder).

The intensity of that piece enthralled the audiences, especially the younger ones who probably gained a new admiration, love and regard for their ancient heritage, their classical music which is as modern and new as anything can be. Timeless, really. What a great way to encourage youngsters to want to delve deep into the precious gems of their culture!

But more of the ‘slow’ was yet to come.

The wonderful performance by Pandit Vishwa Mohan Bhatt had just finished. The soul-stirring music of Mohan Veena was still ringing in the ears and creating a peaceful vibration within.

A group of people were busy rearranging the stage for the Koodiyattam performance by Shri Margi Madhu and his accompanists.

Margi Madhu is a performer, choreographer and teacher, and has also been involved in research projects on various aspects of this art form. A recipient of many awards, he is one of the few remaining performers in the country of this most elaborate and beautiful dance form.

Margi Madhu and his wife, Indu G, who holds a PhD in Koodiyattam, run the Nepathya center for excellence in central Kerala.

This was my first real exposure to Koodiyattam, also called Kutiyattam, one of the oldest dance forms in the world, originating from Kerala.This 2000+ year old Sanskrit dance-drama was traditionally performed only in special venues called koothambalams in Hindu temples and only by Chakyars, a particular community in Kerala.

This ancient and living art form is now recognized by UNESCO as a Masterpiece of the Oral and Intangible Heritage of Humanity.

Characterized by slow and steady movements, Koodiyattam is a very difficult art form to perfect, especially because the artist must express the varied emotions mostly through the use of only his upper body, and particularly through his eyes. Koodiyattam performances are lengthy and elaborate affairs, and traditionally range from 12 to 150 hours spread across several nights.

On the evening of June 12, 2014 at the student center of IIT-M campus, setting the stage took about 30-45 minutes. After this, the audience were given a brief but highly informative session by Dr. Indu, explaining some of the richness and subtleties of Koodiyattam, including the sacred nature of the art form and the musical instruments used in the performance.

An outline of the story of Anguliyankam (that evening’s performance) was also presented. Through hand gestures she demonstrated some of the subtle movements that the audience were going to witness in the actual performance.

Margi Madhu’s performance Anguliyankam (Presentation of the Ring), based on Hanuman’s search for Sita in Lanka was a sheer delight for the senses. It brought to life the Sundara Kanda of the epic Ramayana, especially the part when Hanuman finds Devi Sita in Ashok-vatika at Ravana’s palace and gives her the ring of Lord Rama.

The performance also thrilled the audience in its portrayal of Hanuman’s appearance in Ravana’s court after he is caught by the soldiers of the demon-king.

Typically the ritualistic performance of a single act such as Anguliyankam from the Sanskrit play Ascharya Choodamani is enacted over a period of 12 days. In 1993, Margi brought it outside temple premises and presented the entire text over two-and-a-half years by way of weekly performances.

In June 2012, Nepathya Koodiyattam Centre presented the first full-length continuous performance of Anguliyankam outside temple precincts over a period of 29 evenings.

This programme was held in collaboration with the Hebrew University of Jerusalem, where many students and research scholars in Indology and Sanskrit have been engaged in a deep study of the intricacies of this rare art form under the leadership of the noted Indologist and Koodiyattam aficionado Dr. David Shulman.

Margi Madhu’s performance on that particular night at IIT-M lasted for a little more than two hours. But that in no way diminished the intensity of the experience.

The expression on his face, especially the movement of his eyes, the beats of the sacred copper drums known as mizhavu, the wonderful harmony between the dancer’s movements and the drummers’ beats, all of it was enough to take the audience to a world where everything else sort of disappears. It is as if one just wants to focus on the subtleties of the drama unfolding in front of one’s eyes.

Margi Madhu’s eyes expressed deep emotion compelling the spectator to take up the challenge of exploring deep into the layers, not only of the particular sequence in the story but also of the reality itself.

As one begins to appreciate the slow and patient perfection through which subtle movements and gestures depict the richness of an emotion or a feeling, one begins to feel a connection with the moment itself.

It is as if one has become that emotion itself for that fraction of the moment. Imagine what it would feel like to experience a full length performance over several days and weeks.

When I recall my experience of sitting through this marvellous performance, two things strike me the most.

In today’s time when everything is about a fast pace of life and people (children, youth and adults alike) are being forced to move faster and faster and do more and more, what Koodiyattam represents is an opportunity to appreciate the deep and hidden beauty in all that is ‘slow’, ‘repetitive’, ‘patient’ and hence ‘perfect’.

Secondly, in our present age when it has become so common to speak of and even complain of reduced attention span and extremely limited concentration abilities, watching a performance of this dance form from thousands of years ago in itself is a great lesson in developing and practicing deep concentration skills.

Slow really does it. Indeed.