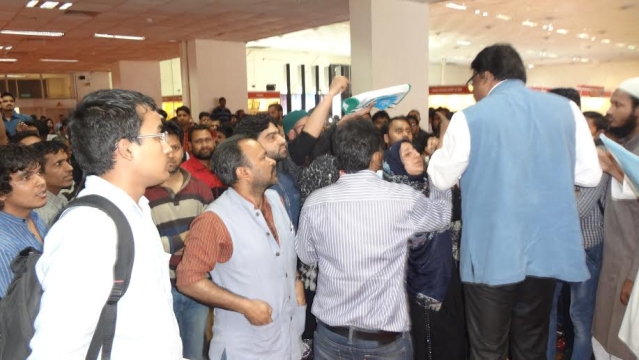 New Delhi– How a handful of radical Islamists can hold the entire house of liberals to ransom was evident at the launch of Noor Zaheer’s new book, “Denied by Allah—Angst Against Archaic Laws of Halala, Triple Talaq, Muta’h and Khula” (to be reviewed by Swarajya soon).

The book was supposed to be released on the last day of this year’s International Book Fair in Delhi. The organisers could not manage the release as a group of Muslims first occupied seats among the audience, then started interrupting the proceedings and finally, went berserk.

The author, Zaheer, herself a devout Muslim, was explaining well the plight of women accepted in ‘marriage’ and then abandoned at will by men. To make the point that the publisher Vitasta Publishing was not anti-Muslim, they had invited a mufti on stage to deliberate upon the issue. This proved the event’s bane.

Islamic cleric Mufti Kamil Qasmi’s insisted that he must be given at least half-an-hour to present his case on the issue of Women and Islam, which he had brought with him written on a few sheets of paper. The Qazi-e-Shari’ah at Dar ul Qaza ignored the fact that he had come late for the meeting and also that there was no time for the entire presentation. The organisers had only an hour for the entire show, in which the qazi had arrived minutes before closure.

The publisher kept on insisting that he should conclude his speech, which very few in the audience could understand anyway, as he was reading directly from the Holy Qur’an. The author strongly objected to the clerics’ presentation that sought to justify the lower status for women.

Before the qazi’s arrival, a band of Muslim students and elders had already occupied seats among the audience. When different people rose to ask questions to the author, the Muslim youths snatched the mike from them — including from Swarajya’s national affairs editor Surajit Dasgupta — and presented apologies for the aforementioned marriages, which included an assertion that they had never witnessed such weddings. None of them had read Denied by Allah.

One protester claimed he was studying Islamic law and jurisprudence at the Jamia Millia Islamia. Another cleric named a madrassah where he hailed from.

Author Zaheer said she had written the book with due diligence after conducting several surveys, but that could not pacify the Muslim section of the crowd.

The book is about the status of women in Islamic society, where the author has argued that Islam was being unfair to women.

The cleric went on to justify wife beating etc. Liberals in the audience were appalled when some radical Islamists from the audience insisted that the cleric be allowed to finish his rendering. The organisers told the cleric that this was not possible due to paucity of time. The cleric stressed that he would take full time since he had come for that.

This exchange went on for more than an hour, but no policeman intervened to bring the situation under control.

Muslim radicals, in the meantime, heckled the speakers and many times they came to blows. The situation was saved due to timely intervention of some bystanders and the meeting had to be hurriedly concluded. At one point of time the cleric said that people were keen to listen to him and he should be allowed to speak.

The bystander who had taken the stage by now asked for a ‘division of votes’, and the cleric was abysmally outnumbered. Even then radicals did not stop insisting that the cleric be allowed to speak. The meeting had to be ended abruptly.

(With inputs from Surajit Dasgupta)