Julia Roberts’ Barefoot Protest: One More Nail In The Coffin of Patriarchy 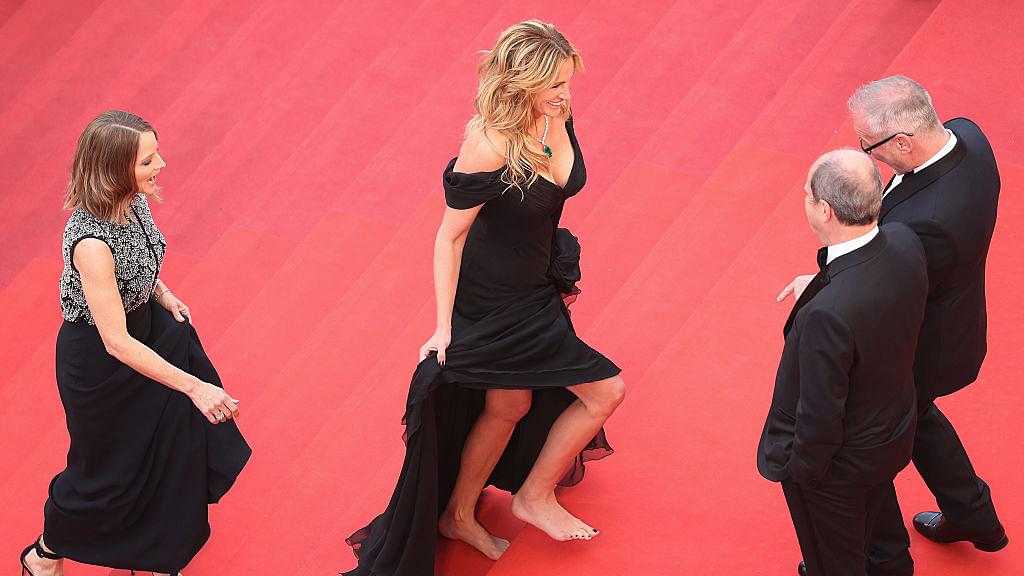 Producer Jodie Foster (L) and actress Julia Roberts, walking bare foot, walk up upon their arrival at the ‘Money Monster’ premiere during the 69th annual Cannes Film Festival at the Palais des Festivals on May 12, 2016 in Cannes, France. (Photo by Andreas Rentz/Getty Images)

Hollywood diva Julia Roberts made waves last weekend at the Cannes Film Festival when she arrived barefoot for a screening of her film Money Monster. It was probably a form of protest against the unwritten dress code at the festival, where many female actors were kept out last year for wearing flat shoes – ie, shoes without heels.

While it is no secret that women go to extraordinary lengths to appear comfortable in high heels, and footwear companies encourage this kind of fashion statement in women, one wonders whether high heels are not another covert feminine acknowledgement of continuing patriarchy.

High heels emphasise legs and the female form, but they also come with physical risks. In October 2012, then Australian Prime Minister Julia Gillard tripped at Rajghat wearing high heels. Thousands of women sprain ankles while walking with heels on uneven surfaces and/or soft terrain. Many have sported broken shoe-heels and courted embarrassment in public places. Men may like watching women in heels, but women court risks wearing them.

In a patriarchal world, emphasising legs and body shape probably gave women an evolutionary advantage in the competition for mates with status and power. But the developed world is moving fast towards equality, and it should have been a matter of time before the human species followed nature’s law – where the male is the one taking risks to woo the female. Western women should have been giving up risky heels to emphasise equality with males, but the billions of dollars spent by the fashion business probably makes it tougher for them to give up on the idea.

In India, where men are in chronic oversupply in most states due to female foeticide, one would have thought that the heel should have been on the other foot. A skewed demography should have meant men having to do more of the wooing than women. While growing sales of male grooming products indicates that this trend is coming, one area where it isn’t happening is in the heels business – which continues to be female dominated.

Nature made the male of the species the risk-taker, and often the better looking partner in the mating game. This is because males have to woo females in most species.

The lion looks much more majestic than the lioness. The peacock, despite the risk of being eaten by predators, sports elaborate feathers that get enhanced during its mate-wooing dance. The peahen is nowhere in the business of being attractive. Similarly, male pheasants or mandarin ducks are more colourful than their female counterparts. This may not be universally true, but the point is this: more often than not, it is the male of the species that needs a leg up in the wooing game.

The human female’s assumption of risks with high heels is probably an anachronism left behind by the rise of patriarchy in our evolutionary journey. But it is sure to change.

Julia Roberts was probably sending a coded message that this needs to change. Good for her. Men should take note.