Kambala’s ‘Usain Bolt’ Jockeys: Sprinting In Slush To Save A Cultural Tradition 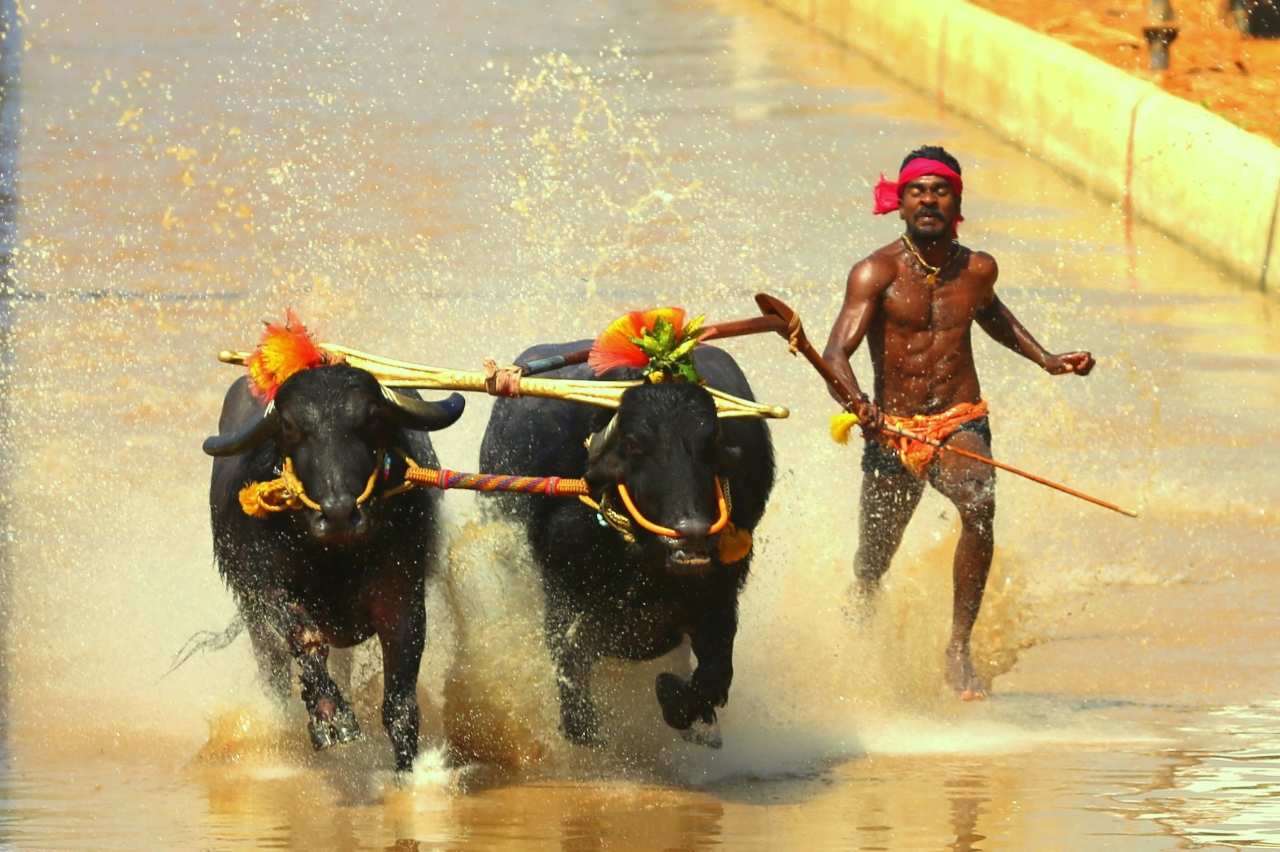 It has been probably the best birthday ever for 28-year-old Sreenivasa Gowda, who has taken Twitter by storm, and has had the paparazzi flashing their cameras at him with redundant questions.

For, never had he imagined that what he did out of love and passion for a traditional sport would catapult him to national fame and have him compared to an international athlete of Olympic fame.

That night (13 February), as he cut his birthday cake after having just dashed across the Kambala tracks at yet another Kambala, Seenu, as he is known among his friends and the Kambala Jockey circle, had no clue what awaited him the next morning. 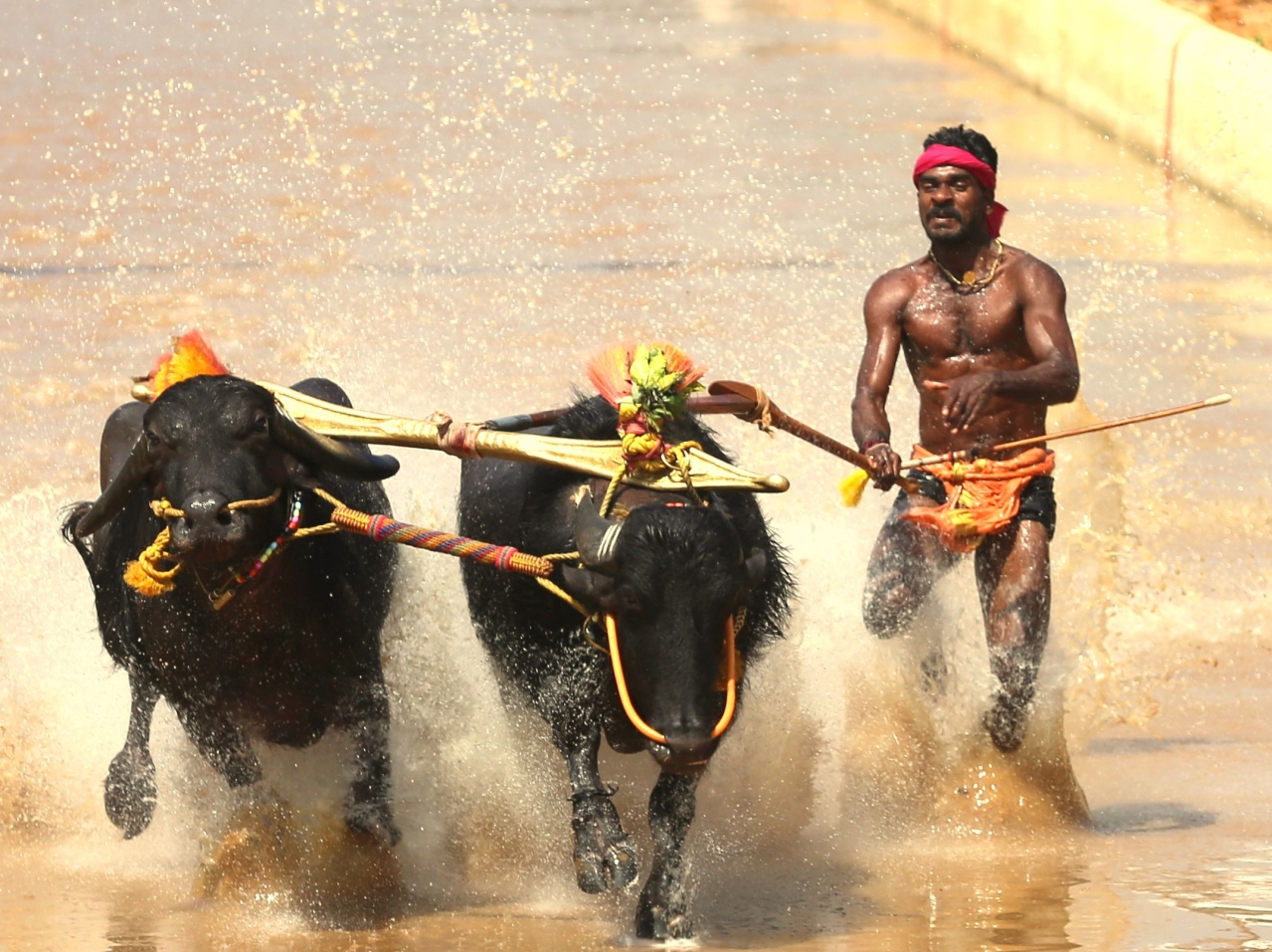 A total of 32 medals in 11 Kambalas was his count this year that night. But his timing of having clocked in his best so far at the Aikala Kambala, having dashed across the ‘kare’ (slush filled track) of 142.50 metres in 13.62 seconds, was to become his elevator to international fame.

After local reportage calculated his run as a 100-metre dash and publicised it saying he had beaten Olympic Champion Usain Bolt’s record by 0.33 seconds (9.55 seconds), Seenu turned into a sensation.

Twitterati catapulted him to a totally different level of fame and there has been no moment of silence since then.

Thank you #Srinivas for sharing. May you be able to make the best of all the attention you have got for yourself and for #Kambala. pic.twitter.com/RFMbj2blzO

As he heads back home having answered the same questions a million times, he explains how he told the ‘press navaru’, who were calling him the ‘Usain Bolt’ of Kambala, that running on a track and in a Kambala kare are not the same.

Back home in Moodabidri after a whole day of media attention, ‘innondu tv awaru eega 9 gantege bartira helidru, nanu illa helide, naale kambala untalla’ (I refused another TV channel that asked me to be live with them. For I need to prepare for tomorrow’s Kambala) he says.

Seenu works as a construction worker. “Monday to Friday, I head to the construction site, weekends I run,” says Seenu, whose fondness for the bulls and the sport got him into the slush track six years ago.

Kambala running takes a different kind of strength for it is no joke to hold a pair of bulls and sprint with them in a slush-filled track. The bulls are unpredictable, the ropes are rough, the race is short and the pressure mighty as the entire community waits with bated breath to watch them dash across as the referee drops the flag and the announcer proclaims ‘ale ale ale budiyer’.

Until they reach the manjutti (sand pit at the end of the track), there is nothing on the minds of the runners.

‘For we don’t run to make or break records or to be in the news; we run because it is our tradition. Kambala is our culture, our samskriti,” says Ravi Kumar Aladangady, one of the oldest Kambala jockeys around. 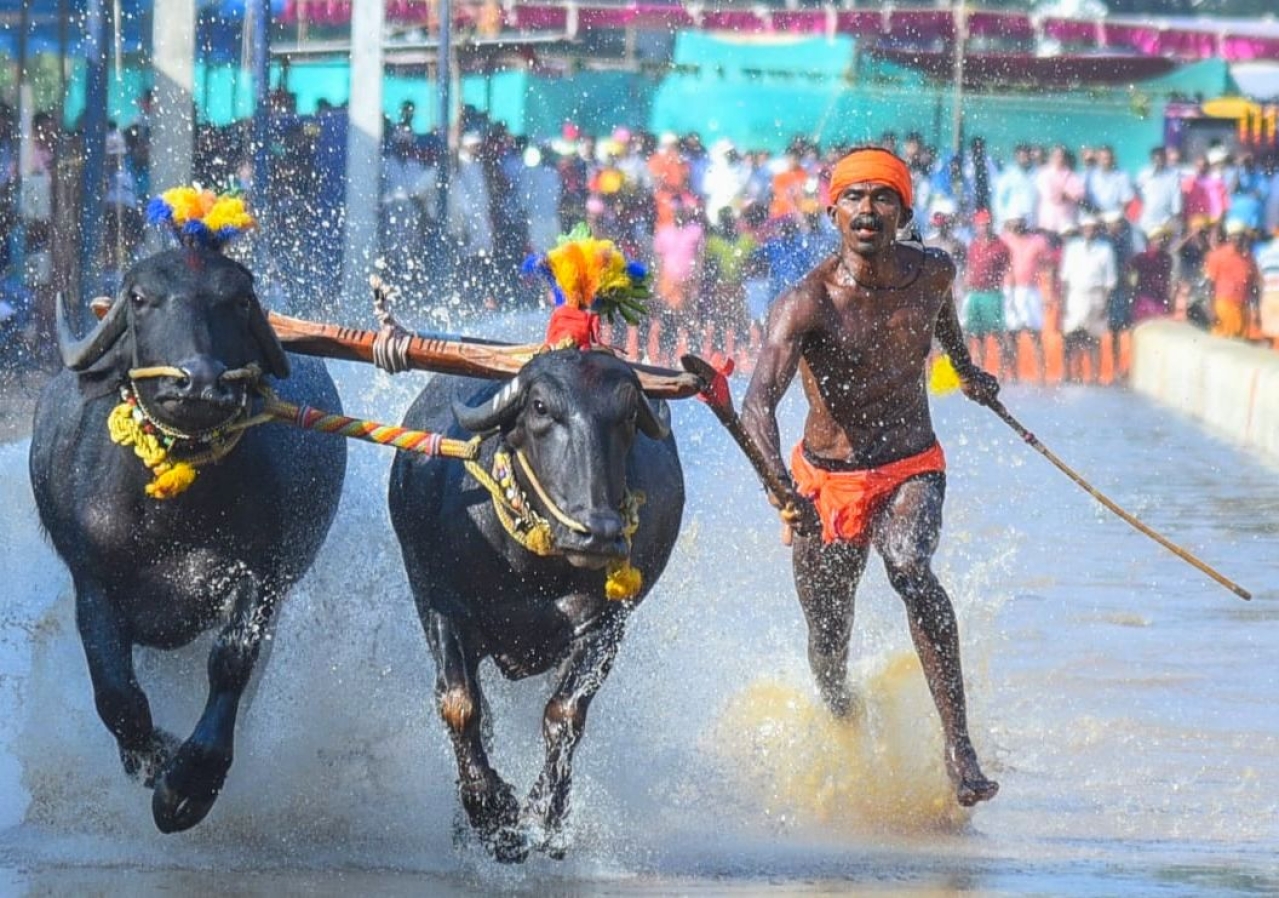 At 51, it is his 29th year of running the Kambala. He remembers his best as 12.42 seconds in a 145-metre track. As he recounts how he treated his broken leg (that had left him bedridden for three months) that doctors had given up on and warned him to never get into the kare again, he says “those who think it is just a sport will never know what Kambala really is”.

As advised by traditional oracles, he went and bought two bulls again, which he had sold off owing to his inability to maintain them. He got back to the track, and healed his leg organically with home medication. 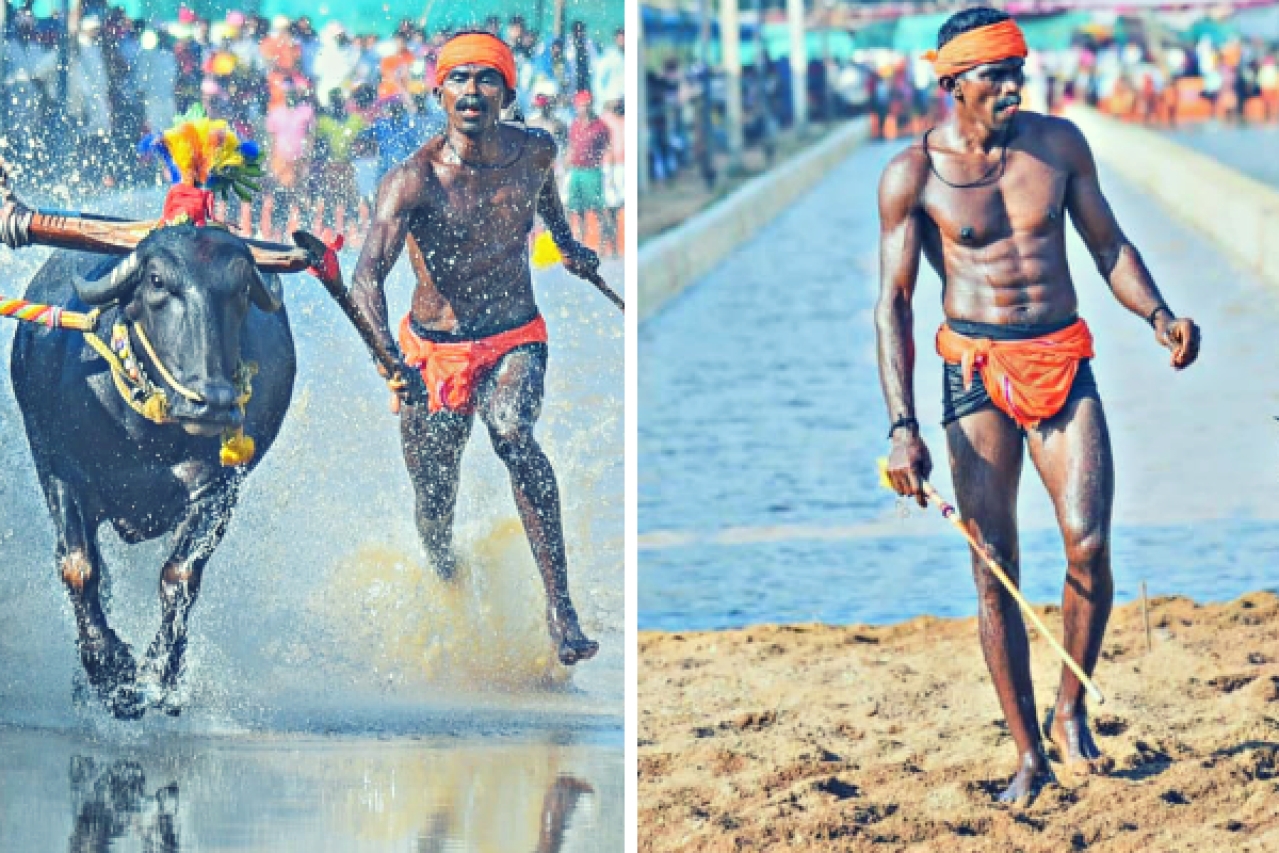 For most owners of Kambala bulls, this is no mere sport. Connected closely to the worship of Daivas that is prevalent in the region, Kambala bulls have also been nurtured by many devout Tuluvas as an extension of their worship. One of the main Daivas that is worshipped is Mahishandaya, or the bull form. The sticks, the ornaments, the plough, and every single adornment of the bull  is worshipped before every Kambala.

Their upkeep costs a bounty, their care, demanding. But Kambala lovers on the coast ensure they do what it takes to keep it going.

“I don’t have FDs or saving instruments. Whatever we earn doing farm labour and such is spent on the bulls and on attending Kambalas during the season,”says Aladangady who has also initiated both his sons in their early twenties into the race.

His 22-year-old son has also trained at the Kambala runners academy, which occasionally conducts certificate courses in Kambala running.

“But the real training is only on the track and organic,” says Vijay Kumar Kanginamane, of the Kambala District who was a referee at the Aikala Kambala where Gowda set the new record.

The fame has brought joy to the entire Kambala community, which now hopes it strengthens their battle against ‘animal activists’ who have been taking them on in the name of ‘animal cruelty’.

“It is heartening to see the attention and support that our Kambala youth Srinivas Gowda is getting. Hope this transforms into more support and helps us save our sport from the likes of a Peta. Because for them, this is nothing but an agenda but for us, it is who we are,”says Captain Brijesh Chowta, who restarted Kambala in Mangalore city.

Twitterati has ensured he gets the attention of the Minister of State (Independent Charge) Youth Affairs and Sports Kiren Rijiju, who has now promised to get Srinivas Gowda for trials by ‘top SAI coaches’.

I'll call Karnataka's Srinivasa Gowda for trials by top SAI Coaches. There's lack of knowledge in masses about the standards of Olympics especially in athletics where ultimate human strength & endurance are surpassed. I'll ensure that no talents in India is left out untested. https://t.co/ohCLQ1YNK0

When he walked beyond the Manjutti at the last race at Mangaluru Kambala earlier this year, his body was glistening with the water he splashed on himself after the sprint. And that smile you see in that image which has now gone viral was what my lenses captured as I asked him: “Anna onji photo deppoliye, eerna six packs da”. His blush mixed with pride was what made that picture perfect. 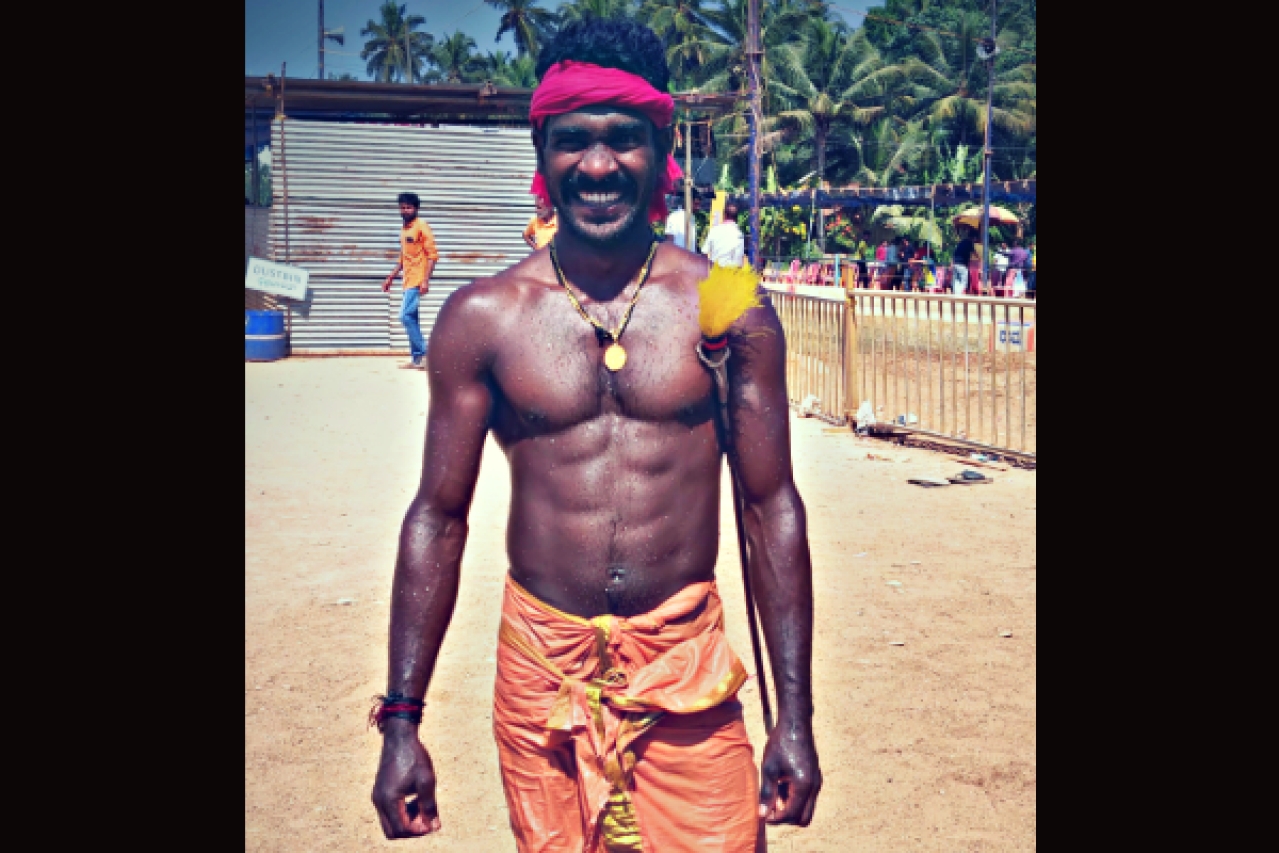 No gym sessions, no protein shakes, no expensive sport gear, no hyper planned diets. For, this is a body chiselled by tradition, nourished by rootedness and maintained by humble cultural pride.