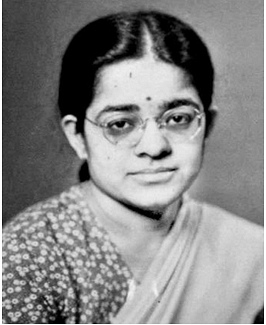 Rajeswari Chatterjee was Karnataka’s first woman engineer and it would be only apt to pay tribute to her extraordinary life and work on her ninety-fifth birth anniversary, today.

Born on 24 January 1922 in Bangalore, Karnataka, her major contribution was in the field of building antennas for special purposes, mainly in the aircraft and spacecraft segments.

An engineer of the 1950s, what enabled Rajeswari to achieve a PhD in engineering at a time when a girl’s chance to pursue higher education was almost nil?

A singular reason was her family and their priority for education. We would soon see how her family was different from many others of the time, and which facilitated little Rajeswari’s rise.

Educated in Bangalore, she obtained BSc and MSc degrees in 1942 and 1943 before joining the IISc in 1944 as a research student in the then Department of Electrical Technology. After the Second World War ended in 1945, an interim government was formed to assist in the transition of India and Pakistan from British rule to independence. This government offered scholarships to bright young scientists to study abroad and come back to independent India and help in building the country's industry and economy, which had suffered terribly during the foreign rule and Second World War. Rajeswari secured one such scholarship in 1946, and was third among women to get this scholarship to study abroad. She got admission to the University of Michigan at Ann Arbor, Michigan for graduate studies and did her Master’s in Electrical Engineering. Her leaving for the US for higher studies meant she had to travel on ship from Mumbai to San Francisco for 30 days - she was by then in her 20s and wasn't married! Her family raised no objections to her going abroad. Remember, this was more than 70 years ago! It is perhaps difficult now to imagine the kind of restrictions women had to face then. Many universities even in the West would not admit women till the 1920’s and 30’s.

She underwent practical training in the Division of Radio Frequency Measurements at the National Bureau of Standards in Washington D.C. After the training, she went back to Ann Arbor and obtained her PhD degree under the guidance of Professor William G Dow. On returning to India, she joined the IISc, Bangalore, as faculty. The first woman faculty at the institute, Chatterjee became professor and chairperson of the Department of Electrical Communication Engineering at the institute. It is here that she met Sisir Kumar Chatterjee, who was a professor and a highly regarded researcher in the same department. She went on to marry Prof S K Chatterjee, with the complete support of her family, and from 1953, Rajeswari came to be known as Mrs Chatterjee. Sisir Kumar Chatterjee became a professor and received the position of chairman in her department. The two of them worked in collaboration on many projects and published several papers jointly. They started research in the area of microwave engineering, the first such research in India. She continued to write books on these subjects even after her husband passed away in 1994.

Teaching electromagnetic theory, and experimenting on electron tube circuits and microwave technology, she guided 20 PhD students while publishing over 120 research papers and seven books on Microwave Engineering and Antennas. She has won numerous awards for her contributions.

After retiring in 1982, she took part in the social programmes of the Indian Association for Women's Studies. She passed away on 3 September 2010.

Rajeswari belonged to a well-known family of old Mysore. Her father, B M Shivaramaiah, was an advocate in Nanjangud, a small town about 13 miles from Mysore city, situated on river Kapila. His older brother was the Kannada literary giant, Prof B M Srikantaiah. Her large extended family was fairly well read. Girls were encouraged to take part in any activity of their choice. Her maternal grandmother, Kamalamma Dasappa, was one of the very first woman graduates in the erstwhile Mysore State. She was very active in the field of women’s education, especially those of widows and deserted wives.

It is interesting to see how Kamalamma herself came to be a pioneer, and would go on to influence Rajeswari’s career. Her husband, Hadya Dasappa, accidentally drowned in the Kapila river in 1904. At that time, she was only 19 years old. She had two little daughters. According to the customs of that time, she should have stayed with her husband's family, leading a simple, austere life. Her father, Ramaswamiah, though had some serious plans for his widowed daughter. He had a talk with her father-in-law, Sitharamayya, and suggested that Kamalamma needs to get a modern education, so that she could take care of herself and her two daughters. Fortunately for her, Sitharamayya, who was broadminded, agreed with her father. Kamalamma, at that time, knew only to read and write Kannada and had never gone to school. Her father requested one of his English Protestant Christian missionary friends to recruit a woman missionary who would teach his daughter enough English to join Maharani's Girls School in Mysore city. Maharani's Girls School itself was started some years ago by the Maharaja of Mysore.

When Kamalamma had learnt enough English, her father rented a house in Mysore and moved his family there. He was at that time posted as Superintendent of Police at Tumkur. He gave up his own comforts of living with his family for the sake of educating Kamalamma. After finishing high school, Kamalamma joined Maharaja's college, where she finished two years of college. Her father then moved his family to the big metropolitan city of Madras, just so she could obtain her B.A. degree. There was no University of Mysore then. After her graduation, the family moved again to Bangalore. It is here that Kamalamma went on to serve as Honorary Secretary of a pioneering women's institution, Mahila Seva Samaja (MSS). She was the only woman University graduate in the Council of Management at MSS. In order to help the cause of girls’ education, Kamalamma set up an accelerated school syllabus, which allowed students to finish their matriculation by the age of 14 or so. This was done in the Special English School run by MSS.

When Rajeswari’s family lived in Nanjangud, the town only had a primary and a middle school for girls. The town had a separate primary, a middle, and a high school for boys. All these schools were managed by the government of Mysore State, and the medium of instruction was Kannada. The girls' schools did not have too many pupils, because according to the prevailing customs, the girls were married young.

“The girls’ schools did not have too many pupils, because according to orthodox customs, the girls were married at the tender age of twelve or thirteen or so, and usually their education was stopped after marriage. However the girls were not sent to their husband’s family until they they were sixteen or seventeen years old. In the meantime, they were taught by the older women of the family, the intricacies of housekeeping like cooking, washing, keeping the house clean, stitching simple clothes, and the intricacies of religious ceremonies and so on.”

Rajeswari Chatterjee in her autobiography, A Thousand Streams: A Personal History.

Rajeswari’s defining moment came when she was old enough for school, and her grandmother, Kamalamma, persuaded her parents to allow her to stay with her in Bangalore, so that she could attend the Special English School at MSS. This enabled Rajeswari to start her education in Bangalore city. After completing middle school at Special English School, she went to London Mission Girls High School and then to Mysore University (Central College).

I would also like to draw attention to two instances that Rajeswari mentions in her autobiography, about her father. When Rajeswari was a three-year-old toddler, her family lived in Mysore, where her father practiced law. He used to come home during his lunch breaks and would teach Rajeswari the alphabets of both the Kannada and English languages. Later, when he moved his practice to Nanjangud, he began constructing his own house. In the evenings and on holidays, he used to take four-year-old Rajeswari to the construction site. He would show her how the construction was proceeding and take interest to explain to her how the red clay bricks were laid, how the mortar was made, etc. How common was it for fathers of that time to encourage young daughters to understand and learn about building construction?

It took a certain mindset and a supportive and encouraging environment in her family for Rajeswari to obtain the education she did. It was not common in those times for girls to have the kind of freedom she had.

Her daughter Indira is also an eminent scientist who has made a name for herself for researches in microwaves. Indira Chatterjee is now a Professor of Electrical and Biomedical Engineering at the University of Nevada, Reno, USA.

Several awards and honours have come Prof Rajeswari Chatterjee’s way, including the Mummadi Krishnaraja Wodeyar Award for first rank in the BSc (Hons), the M T Narayana Iyengar prize and the Waters Memorial
prize for the first rank in MSc, the Mountbatten Award instituted by the Institute of Electronic and Radio Engineers, the J C Bose Memorial prize for the best research paper from the Institution of Engineers, the Meghnad Saha Award and the Ram Lal Wadhwa Gold Medal from the Institution of Electronics and Telecommunication Engineers.

However, in spite of she being the first woman engineer from Karnataka, the state government has not still recognised its eminent daughter.