Kashmiri Hindus Recall Times From The Past, Their Culture And Temples, And The Fateful Night When All Was Lost 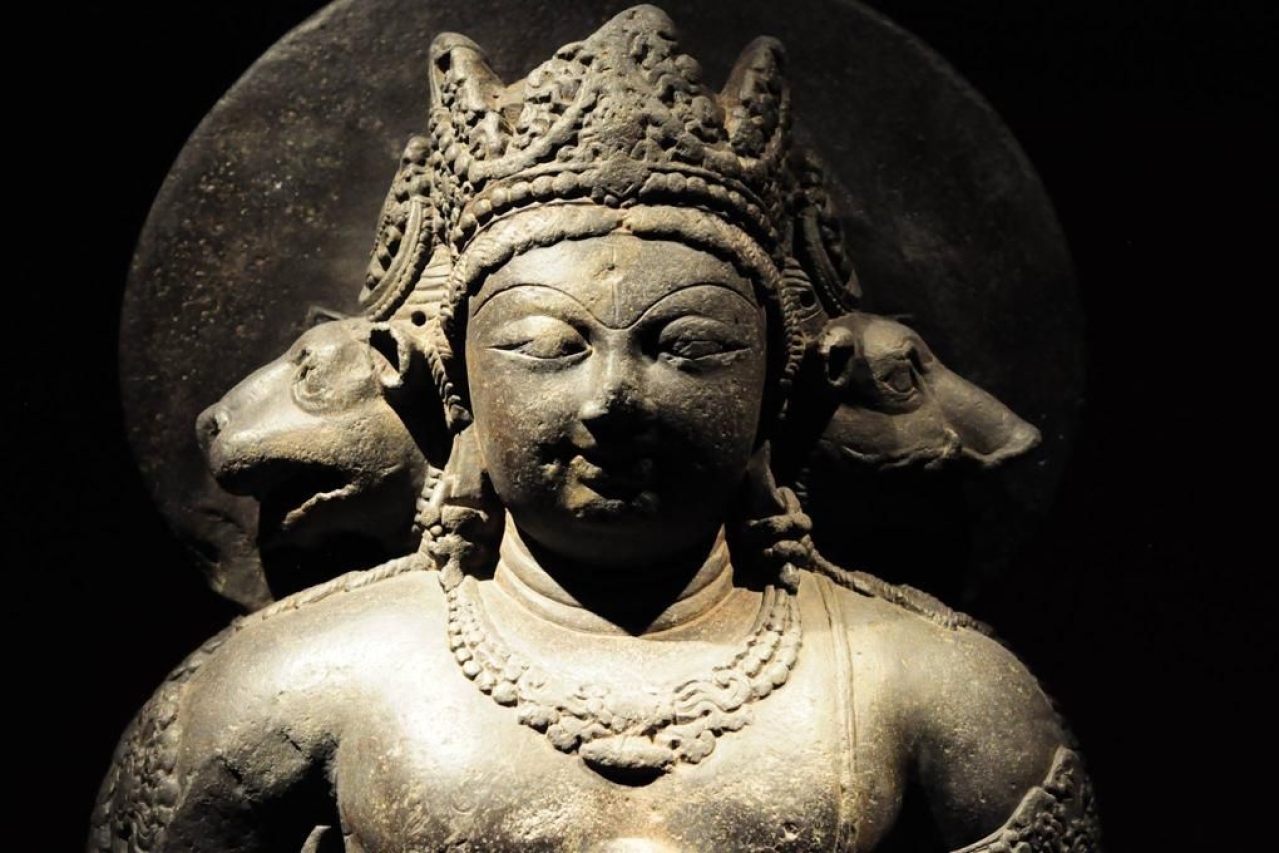 Kashmiri stone sculpture of Vaikuntha Vishnu at the Metropolitan Museum in New York.

In a recent talk on Hoysala temples, stapathi (sculptor) Ganesh Bhat asked the audience to name the oldest temple in India.

Some said it was the cave temples of Ellora and Ajanta, others named the Konark Sun Temple and some the Madurai Meenakshi Temple believed to be built in the first century CE.

Bhat, an expert on temple architecture, said the earliest temples were stupas built in Kashmir, which became models for Buddhist architecture elsewhere in the world.

Apart from the several temple complexes in Kashmir, many of which are in ruins now, Kashmiri ivories and bronze icons have influenced the history of sculpting in India.

Jay Shankar, a prolific temple photographer, recently took a picture of 10th century Kashmira at the Rubin Museum of Art in New York. Kashmira is believed to be a personification of Kashmir, made of copper alloy with inlays of silver. The icon is an example of early metalwork from Kashmir. 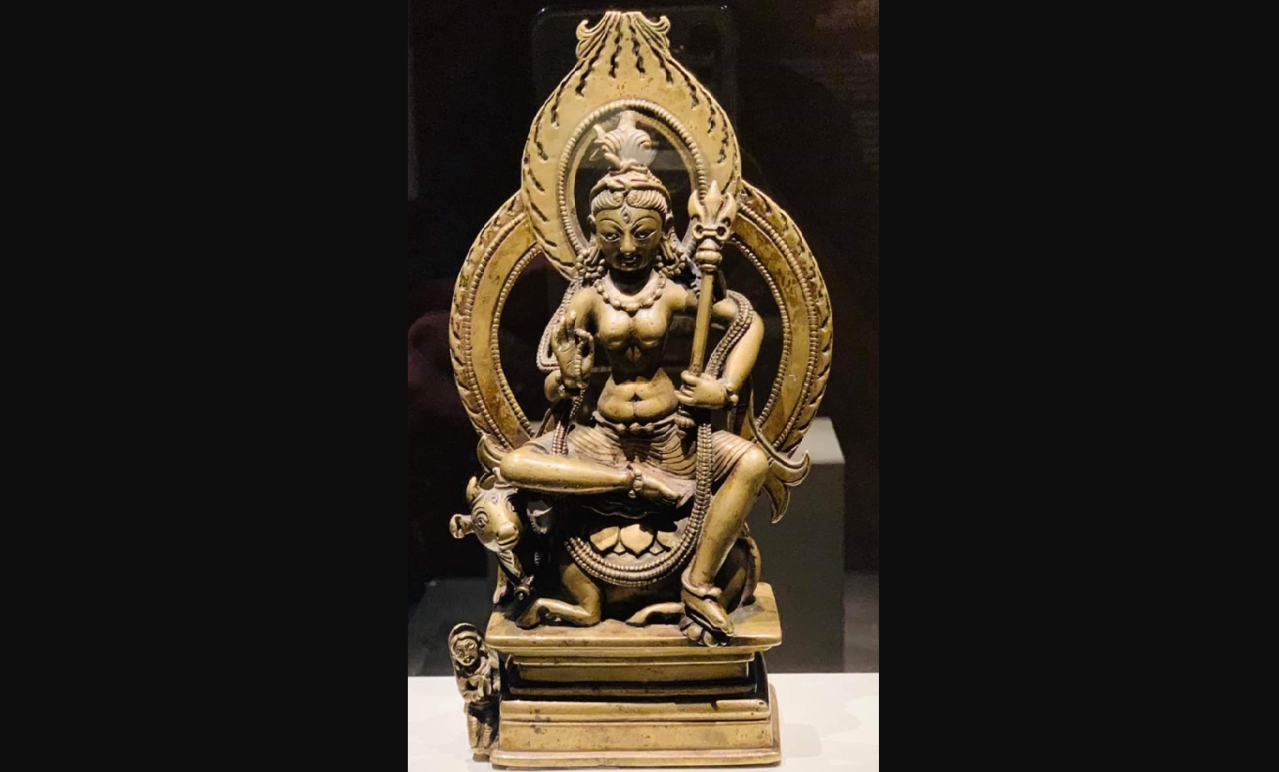 Kashmira at the Rubin Museum of Art in New York.

Kashmiri ascetic and aesthetician Abhinava Gupta (980–1020 CE), has described the valley as an exquisite paradise on earth where saffron flowers scattered everywhere seemed to make the earth into a garden for the worship of the three goddesses, a centre of learning and literature where everyone is either a poet or a scholar, where even warriors are eloquent!

Much of this extraordinarily brilliant culture of excellence in literature, philosophy and the arts was forgotten on the night of 19 January 1990 when loudspeakers blared threats asking Kashmiri Hindu Pandits to convert, leave or perish.

Fast forward three decades later -- a political remedy has been initiated but for the Kashmiris living in Bengaluru and elsewhere, there is a deep sense of being let-down.

Writer, activist and founder of Upword Foundation, Ashish Dhar, describes Kashmir as ‘the fountainhead of Bharat’s creative genius’, all of which has been systematically wiped out by centuries of onslaught by invaders intolerant to Dharmic civilisations.

Dhar says that if the tales and the scale of human tragedy of the 1990s don’t serve as a warning, the sacrifice of the original Kashmiris will have been in vain.

Bulbul, another Kashmiri in Bengaluru, recalls the night when her family’s nightmare began. The family was watching the film Ben Hur on TV and her uncle who was running a fever left the house, never to return. Her brother found the bodies of their three uncles near the Jhelum river the next day.

Bulbul says the community’s dearly held tenets of Kashmiri Shaivism has given them strength and solace. “We have been raised to believe that Shiva is the only doer. This philosophy teaches us to be objective, to attribute everything to Shiva.

“But it is difficult to hold on to this in the face of the anger that is within us. It is not just the people who have been violated, it is the space, the culture, the heritage.”

Journalist and Chairman of the Kashmiri Hindu Cultural Welfare Trust in Bengaluru, R. K. Mattoo, says in the initial years, Kashmiris looked for each other through newspaper advertisements and made it a point to meet once in a month in Cubbon Park. 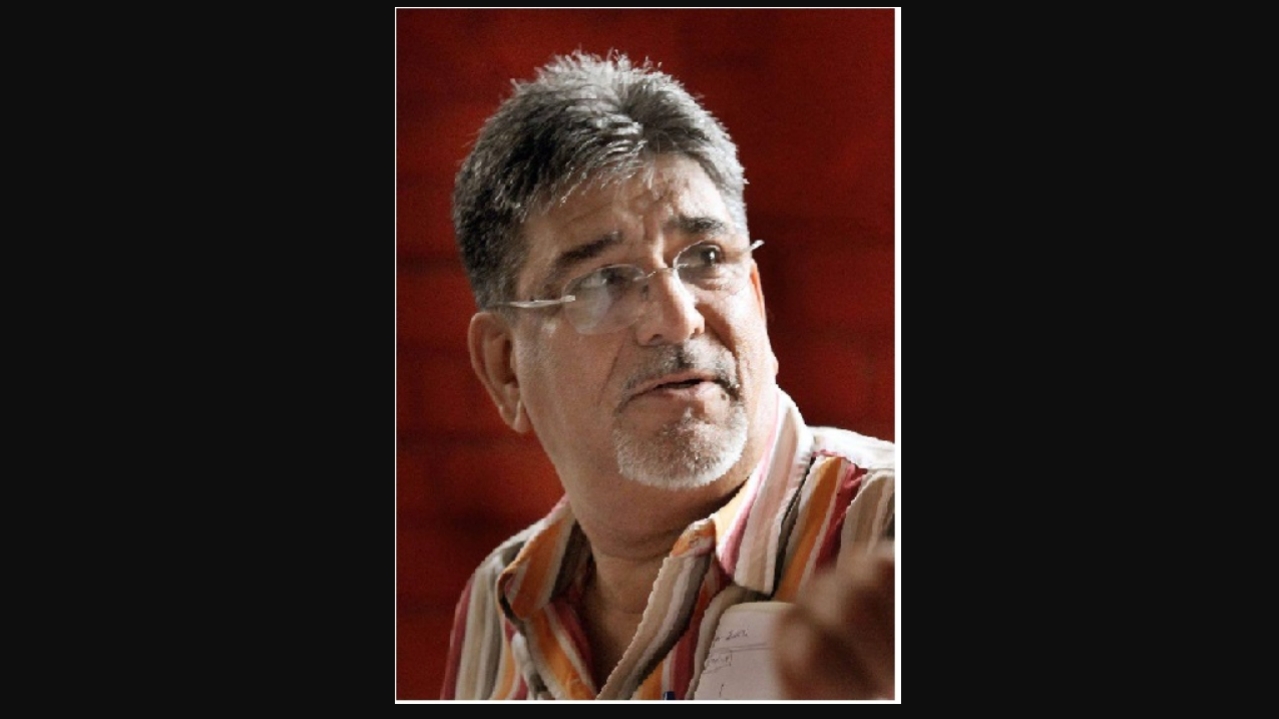 R K Mattoo, a journalist and Chairman of the Kashmiri Hindu Cultural Welfare Trust in Bengaluru.

They formed the Kashmiri Hindu Samhiti in 1991 so that Kashmiris could celebrate festivals in the Cubbon Park or Lal Bagh, till the establishment of the Kashmir Bhavan in Jayanagar. 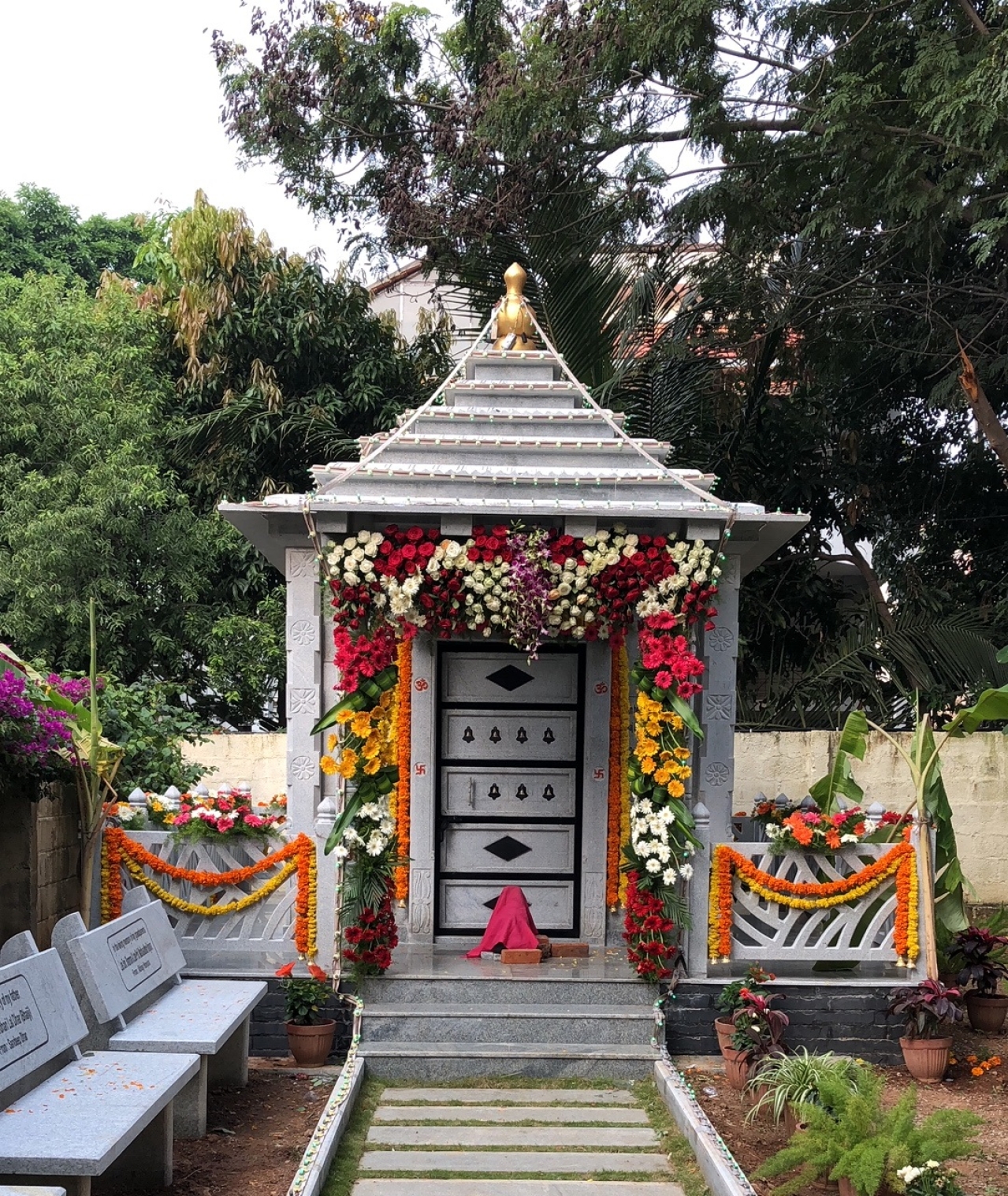 Says Mattoo, “Today, Kashmir Bhavan is the common address of nearly 400 Kashmiri families who have made Bangalore their home. We celebrate marriages and festivals together and perform homas to keep the community together and preserve our culture and traditions. 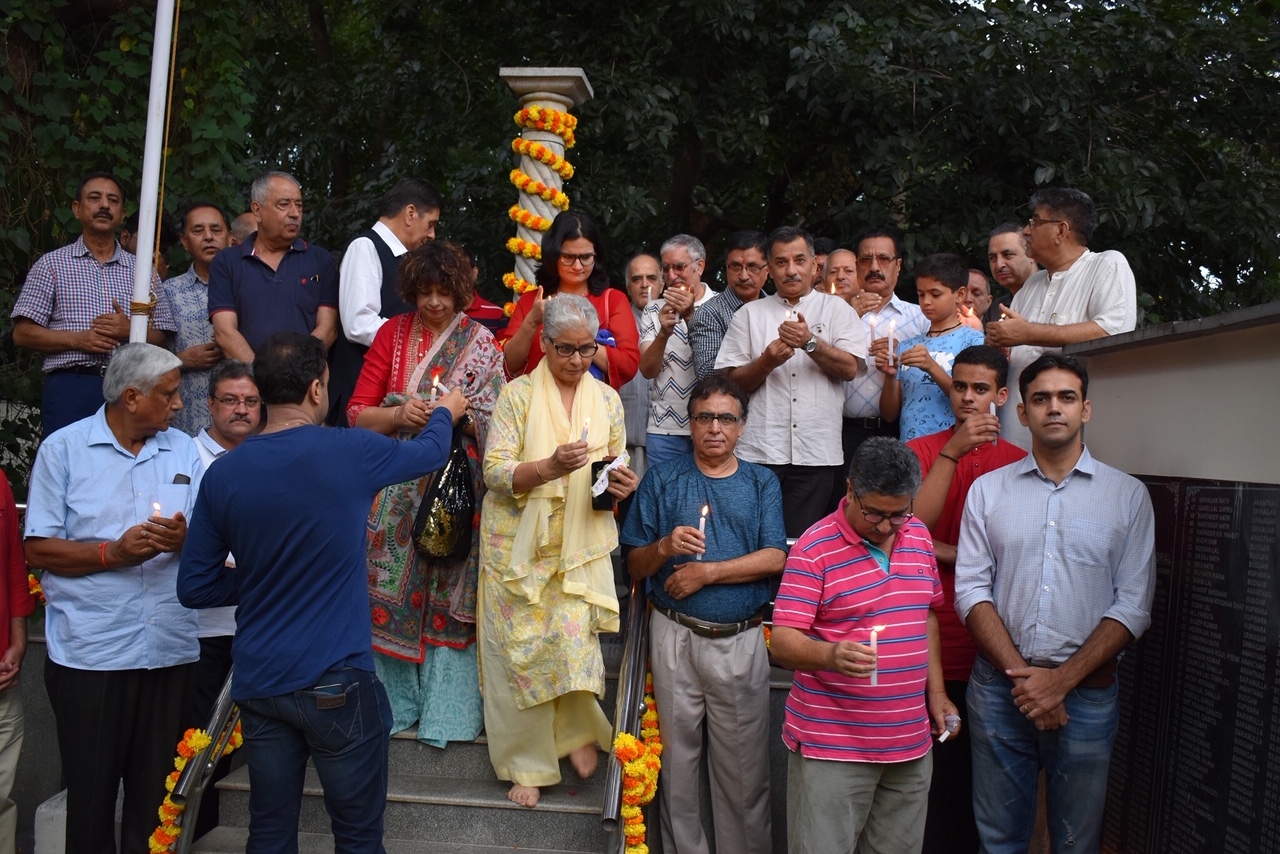 Kashmiris at the Kashmir Bhavan in Jayanagar.

“Since our ancient temples numbering 500-odd were destroyed by terrorists in Kashmir, we also built a Shiva Temple (Neelakanteshwara Temple) in the Kashmir Bhavan premises.

“The walls of Kashmir Bhavan are filled with photos and paintings from these historical temples and shrines to keep alive memories of the past.”

Dr Ieshan Bali, former Convenor of the J&K Sampkar Cell and a member of Panum Kashmir, Bangalore Chapter, says he has no memories as a child in Kashmir as he left when he was a two-year-old baby.

“We were a close-knit community initially -- a community that lived together, laughed together, cried together. I remember as kids we were different from people around us.

“We spoke a different language, our food was different and we looked quite different from others – we grew in an environment of confused identity. Maintaining our identity 3,000 kms away from home has been very difficult.”

Dr Subhash Kak, an NRI of Kashmiri origin, an author, scientist, and an Artificial Intelligence expert, is on a visit to India. His extended family was forced to abandon their homes in the 1990s.

He writes in his autobiography – The Circle of Memory, “Even though similar violence had occurred nearly once every century since the onset of Islamic Rule in the fourteenth century, this was the first complete expulsion of the people connected to Kashmir’s ancient history and culture.

“We didn’t know that this was a foretelling of similar tragedies to come elsewhere. Posters on the walls of public buildings tried to soften the blow by saying that only men may leave and women could stay, anticipating the horrors that were to befall Yazidi women in Iraq twenty-five years later.” 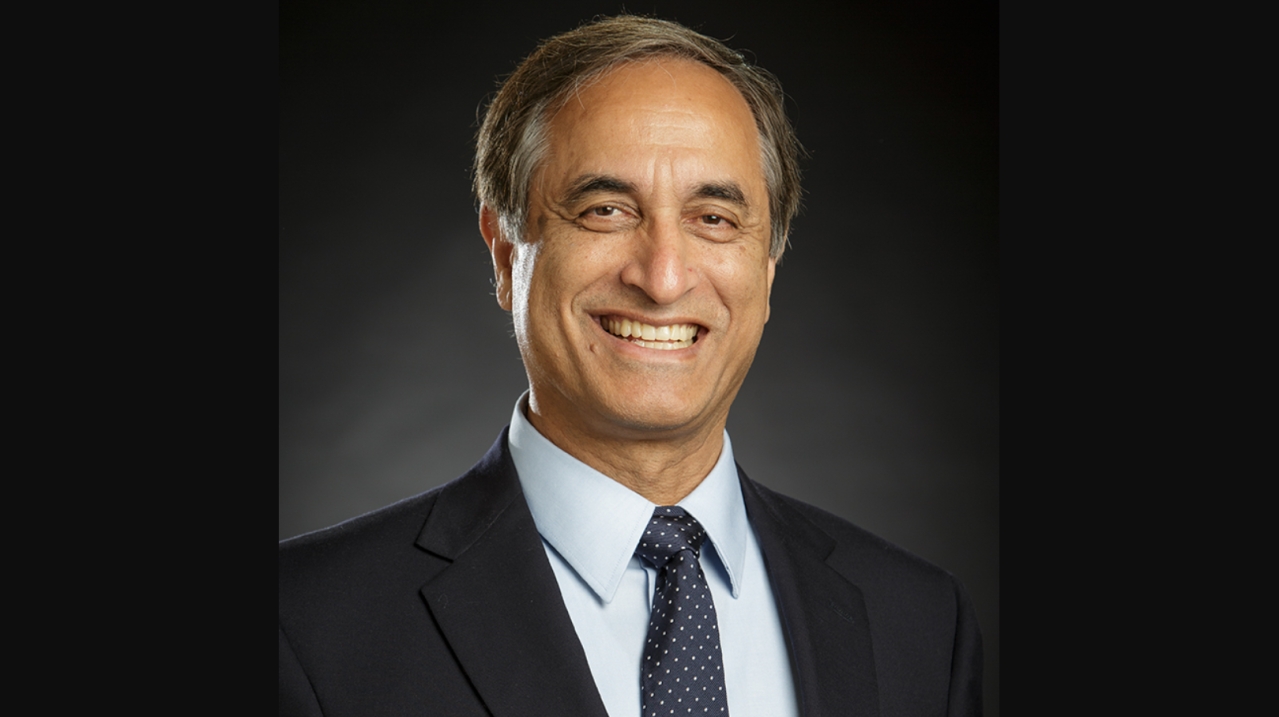 Dr Subhash Kak shares his views on the road ahead for Kashmiris.

What has been the toll on Hindu culture, on temples and on the psyche of Kashmiri Pandits?

The Kashmiri Pandit situation is a great modern tragedy. Imagine an entire community of 200,000 people forced to leave their ancestral homes and made destitute. Many have rebuilt their lives in other places of India and some have left for overseas.

Given economic compulsions, it is unlikely that most of them will ever return permanently to Kashmir. Living as small minorities in other cultures, they will lose their language and shed other parts of culture as well.

How did the series of invasion faced by Kashmir affect her culture?

The classic arts and the sciences of Kashmir came to an abrupt end when Islam became politically dominant in the fourteenth century. Sculpture, painting, dance, music could no longer be practiced.

After the political situation had become stable, the subsequent centuries saw an emphasis on devotion and its expression through the Kashmiri language as in the poetry of Lallesvari.

The creative urges at the folk-level found expression in the works of the craftsmen of wood and textiles. But Kashmiri ideas lived on through the arts that transformed expression in Central and East Asia, and through Tantra and aesthetics, they shaped attitudes in the rest of India.

Many Kashmiris, like the musicologist Sarangadeva and the poet Bilhaṇa, emigrated. Although Kashmir had sunk to a state of misery, outsiders continued to pay homage to its memory as the land of learning, and Sharada, its presiding goddess, became synonymous with Sarasvati.

What do you think can lead to a revival of Kashmiri Shaivism?

In recent decades, Kashmir Shaivism has gained popularity across the world amongst lay people. However, there may not be a sufficient number of young people making a serious study of it.

The passing of Swami Lakshman Joo robbed the Shaivite community of a great master. Some thought needs to be given to developing new mechanisms of support for serious students.

Which temples, shrines in your opinion should surely be re-established first?

Some temples, like Tulamula, are still functional, although they require guarding by the police. Which other ones should be revived depends on how the political situation unfolds and if the Pandits are able to return in sufficient numbers.

But this apart, some of the great ancient temples -- such as Martand and Avantisvamin -- need to be rehabilitated to a minimal extent so that they could be made part of our heritage tourism.

Do you foresee a time when the Valley will heal?

I am always hopeful that things will change for the better. We cannot undo the past but we must strive to make the best of what we have.