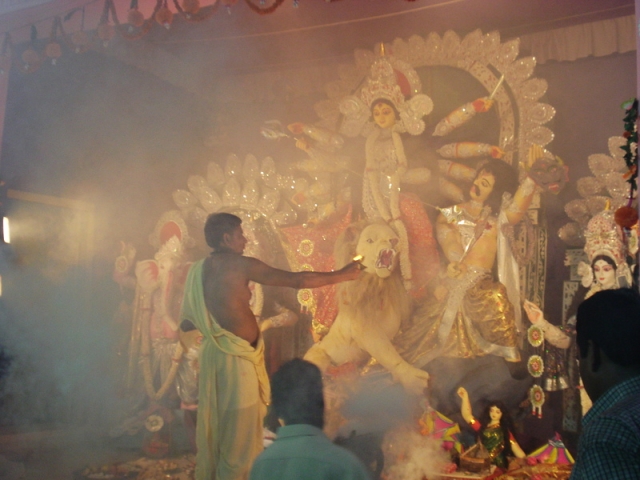 One must be cautious that in the commercialisation of the festival, we don’t end up losing its original simplicity, sanctity, and a sense of community participation.

For much of eastern India, particularly Bengal, Durga Puja is the single most important annual festival. The city of Kolkata bursts into celebrations that rival the carnival in Rio in terms of the sheer scale of cultural outpouring. The extra-ordinary artistic creativity on display is awe-inspiring and its egalitarian openness to all people, including non-believers, is admirable. Moreover, the popularity of the festival has steadily spread over the last several decades. It was driven initially by the enthusiasm of Bengali communities living in other parts of India and the world, but now one finds it independently celebrated by Hindus who may have nothing to do with its origins in eastern India.

All of this is a good thing. However, there may be a reason to pause for a moment and reflect on the danger that something of the original spirit of Durga Puja may be lost in the increasingly more elaborate celebrations and the growing commercialized/ professionalized approach towards managing the events.

Firstly, in the race to display ever more artistic creativity and grander spectacles, the original simplicity of the religious tradition is eroding. The tradition is clear that the idol must be made of unbaked clay that is meant to dissolve without trace when immersed in a river or other water-body. Unfortunately, as the idols have become more elaborate, artisans have begun to use paints, plaster and other materials that do not entirely disappear without trace. Add to this, all the materials that are used for building “pandals” that make a statement.  This goes against the very idea of the goddess merging back with the elements of the universe at the end of the festivities.

Secondly, with the emphasis on artistic wizardry, something of the sacred is being lost. Durga Puja holds a deep spiritual significance to the millions who follow the Shakta stream within Hinduism. The morning “anjali”, the evening “arati”, the “chandi-path”, the “dhunichi” dance to the beating of “dhak” drums are all central to the festival. The shift to grand spectacles and large crowds can distract from the personal link that devotees feel for the mother-goddess. It is important that we do not undermine the sacred nature of the festival.

Third, a key part of Durga Puja is the way in which it brings together the community. It is about the shared meals served in turn by members of the community to each other. It is about amateur cultural performances in the evening by boys and girls, even adults, of the neighborhood. Admittedly some of the amateur performances can be awful, but it does not matter – the cycle of practice sessions and preparations are an important part of the shared memories of Durga Puja and anchors many a lasting friendship. By turning over the communal meal to caterers and the cultural performances to professional artists, something of the community spirit is lost.

I am aware that I may be sounding like an old uncle hankering after the good old days. Let me be clear that I am not against innovation and creativity – and am very much in favor of the artistic energy on display. I also know that the festival generates income for thousands of artisans, caterers and other service providers. However, it is important not to lose sight of the actual purpose of the festival and ensure that the original spirit of the tradition is not lost: community participation cannot be replaced by event managers, the amateur performances cannot all be replaced by professional artists, and mindless spectacle cannot replace the sacred nature of the festival. Of course, all living traditions must change with the times but the purpose of innovation must be to bolster the tradition and not dilute it.

(Sanjeev Sanyal is an economist, urban theorist and best-selling author)