Krishna In Music: How The Muse Is Celebrated In Five Soulful Renditions 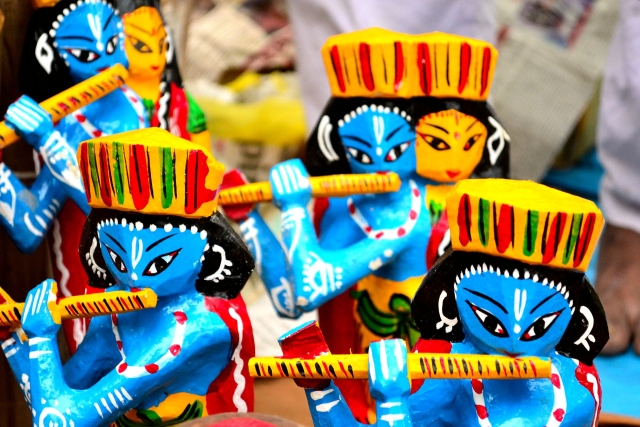 Wooden toys being sold at the banks of the Khoai river. (Sugato Maitra/Flickr)

Krishna can easily be called India's greatest musician. The flautist, the seed and fountain of the eternal leela, the charmer, the artiste, he has been the guiding force of those who sing and those who listen. He is the muse himself. On Krishna Janmashtami, we share five musical renditions that celebrate Krishna and bring classical and the masses together.

Girija Devi had a way and musical access to Krishna like no other musician or vocalist (and this, dear rasikas and Krishna bhaktas, could be left for another day to discuss). Her quest into Krishna was free. It would reflect a sense of right on him in all its subtleties. This sweet sense of right lived in her celebration of Krishna in khayal and other forms. Here, sometimes, she would address him, even without addressing him directly. Imagine, then, the power of her singing in compositions where she is singing to him directly.

Every aspect of Krishna -- from his beauty, which she would try to meticulously define over and over again in different compositions or just one, to expressions that would delve into the spiritual, become visible to the rasika in Girija Devi's singing.

Ankhiya rasili, sung in praise for Krishna's beautiful eyes, is one such composition. "Rasili" (having rasa), the word itself becomes loaded with meanings in her rendition. Mischief is subdued.

The entire weight of her devotion falls on three words -- "Ankhiya", "Rasili" and "Shyam" -- Krishna himself. She wraps them in gamakas. Little towards the end in this composition, Girija Devi turns the sringar mood around. The celebration takes a different pace, as if, in reconciliation with what Krishna's eyes leave her with.

Mharo pranam is somewhere at the core of the vast musical heritage Kishori Amonkar has left for her rasikas. Many listeners often discuss the "character" of her voice in this bhajan. This aspect is certainly irrelevant, distracting and wasteful. It stands a pure reflection of Kishoriji's singing and style.

Cerebral in the first place, flowing in surrender, studded with impeccable embellishments and in total control of narration. In addition to these qualities, it is Kishori ji's melodious instrument to explore Meera's own love for Krishna.

And, perhaps, just one of the many shades of Kishori ji's own exploration of love in general and the spiritual in particular. Here, too, her singing turns her inward in addressing the subject.

Krishna doesn't visit you, in ears or throat (head or heart), unless you feel him walking towards you from the theatre of rich imagery in Pandit Rajan and Sajan Mishra's singing. Their singing to Krishna comes across as an act of seva, service in devotion through singing and music.

Smells, sounds, scenes, from Krishna's living and lives around him, erupt in a fountain. Biri Naval is at the helm of sringar rasa. It is a sweet memento of their patience and persistence bound to the Chautaal, the beat cycle that gives dhrupad, the ancient musical form its soul.

Between the lofty quarters of the classical and the humble masses, is a zone only a few maestroes choose to walk through. That zone bridges the classical and masses. It serves a narrative, conversations, talking, words.

Pandit Bhim Sen Joshi, a great soul, is one such great vocalist. Bhajans were his vehicle to the masses and devotional music, his alphabet to a language he had built using music. Chalo Ri (track three here) is one of the playful renditions from Pandit ji laced in thoughts and questions. It is an invitation to hear the flute. A tribute to the flute. Krishna's flute.

Pandit Jasraj shares the work of Krishna's flute. He makes you join the song without caring for who you are. He lets you become part of Krishna's great leela. Pt Jasraj has brought the texts to masses by, most gorgeously, using the concept of chorus.

He has taken the initiative of letting others join his song to Krishna. In doing so, he melts the faintest resistance to any mental block or perception that prevents the singing of texts by people they are meant for.

The full use of orchestration and chorus in this rendition of Shri Damodar Storam -- is true to his style. It tells you what getting down from the pedestal to sing texts means to an artiste who is guided by devotion and honesty in art.