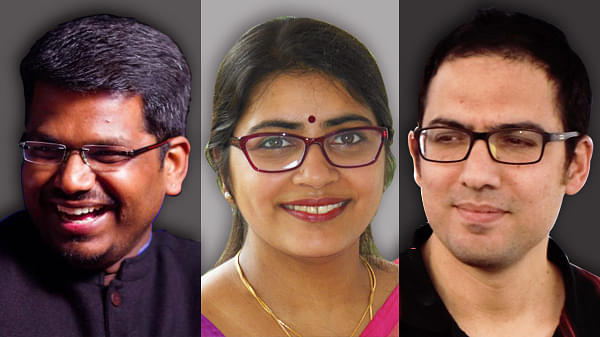 What is it that has sounded the death knell for the ‘Indic way’ of life in the land of its origin? Ask this question and a recently formed group of individuals who call themselves the ‘Indic Collective’, offers clearly worded answers – not passionate banter but well-thought-out, legally sound responses.

The Indic Collective aims to take the route of advocacy and legal activism “whenever and wherever we find our culture and way of life under assault from political or cultural forces that have an agenda of their own under the garb of human rights or environmental concerns and the like”.

Registered in Chennai in June this year, the trust comprises activists, intellectuals and civil liberties advocates committed to the advocacy of Indic civil liberties through constitutional and democratic methods.

Their goal, as stated, is ‘to advocate, through constitutional and democratic means, the right of the Indic way of life to exist and thrive’. Some of the issues they are currently working on include the freeing of Hindu religious institutions from ‘unconstitutional’ state control, deportation of illegal immigrants who pose a threat to the demographic balance, national security and retrieval of stolen Indic religious and cultural artifacts, among others.

The trust has a core legal team, led by advocate J Sai Deepak, with the help of whom they intend to present the concerns and represent the ‘Indic interest’ before the courts of law.

Having recently approached the apex court seeking the deportation of Rohingyas, they were also the only ones to seek a relaxation on the ban on the sale of firecrackers in the National Capital Region.

A crowdfunded initiative, the trust aims to get the common person involved by taking their inputs on the website, interacting with followers and welcoming contributions on twitter and by inviting ideas to the email address namaste@indiccollective.org.

Talking to Swarajya, Anjali George and Ashish Dhar of the Indic Collective Trust (ICT) say the objective is “to usher an Indic renaissance”. Here are excerpts from the interview.

Of late, the intellectual discourse in India has been turning extremely volatile due to the one-sided application of secularism and Western liberalism on the native culture. Ironically, in the name of secularism and humanism, the rights and ethos of the native population have been trampled on. Issues like the uniform civil code (UCC), Right to Education Act (RTE), temple administration, demographic inversion, education, etc, have all elicited passionate responses from the Indic side. However, these reactions have suffered from three significant gaps:

1. Disparate, confused and poorly articulated responses to challenges and curbs on Indic beliefs and practices

2. Lack of institutionalised action, which vastly limits the reach and coherence of the narrative; and

3. Responses vary from poorly worded petitions to uncoordinated protests destined to fail, to deceptive, violent and extra-judicial vigilantism (with negative consequences to the cause and terrible optics)

In short, the Indic way of life is being put to death by a thousand pricks in the land of its origin. The unbearable thought of inertly waiting for our cultural demise inspired us to establish a platform that would fight the battle for the rights of the people belonging to the Indic civilisation. Thus was formed the Indic Collective Trust.

So, what is this Indic renaissance that the ICT has as its motto, and how would the trust go about achieving it?

The British colonialists and later their Indian successors were not only indifferent to the economic well-being of the Indian people, but were also fundamentally antagonistic to the cultural ethos of the land. At the same time, there was great intellectual curiosity developing among many Europeans, and a lot of resources were also devoted to the colonial scholarship on India. As a result, non-Indians became self-appointed experts on Indian literature and culture while Indians helplessly strived for material prosperity through the route of Western education.

With each passing generation, the educated Indian was drifting further away from his roots, and by the end of the twentieth century, the Indian intelligentsia was wholly impervious to the vital impulses and intuitions that moved the hearts of the hundreds of millions who looked up to them for cerebral guidance.

The schism was further accentuated after the internet exposed many people to the works and thoughts of genuine intellectuals and thinkers who had somehow remained steeped in the Indian tradition. Writers like Ram Swarup, S R Goel, Koenraad Elst, Arun Shourie and the works of modern sages like Swami Vivekananda and Sri Aurobindo influenced a fresh stock of energised citizens, who also had the advantage of material prosperity in the post-liberalisation era. The self-loathing decadent establishment began to give way, powerless as it was against the intellectual firepower of the ‘renegades’.

The public narrative had to be seized from the imposters running the show, and the record needed to be set straight. It was only a matter of time before collaborations would start happening and people would begin to institutionalise the mechanism of dislodging the hollow power structures with a revitalised spirit of intellectual enquiry grounded in the profound spiritual and dialectical traditions of the Indic civilisation.

We believe that we are, in our own small way, carrying out that task, as are many others. If this is not an Indic renaissance, what is?

The trust says its broader objective is ‘to advocate, through constitutional and democratic means, the right of the Indic way of life to exist and thrive’. What is this ‘Indic way of life’ and what are currently the impediments to living it?

The Indic way of life can be defined as the unique cultural and social code and the ensuing social order that has characterised life in the Indian subcontinent since time immemorial, and continues to be adopted by the various communities across the South and East Asia. The common thread that runs through these strikingly diverse cultures and belief systems is an implicit commitment to dharma.

As mentioned earlier, the most significant impact of British imperialism in India was the replacement of native institutions with those that served the colonial interests. To maintain India as a profitable colony, the British had to restructure Indian society. Sadly, the subversion of tradition was so complete that even after gaining independence, public institutions continued to retain their colonised orientation.

For example, many secular state governments in India directly control Hindu temples and usurp the money that comes in from donations while the religious institutions of minorities have complete operational and financial autonomy. Likewise, various advocacy groups, managed by people not exactly sympathetic to the Indics, influence the policy-making as well as the judicial process, and meddle with Indic practices and customs to suit their vested interests. The RTE exempts educational institutions run by minorities but imposes stringent restrictions on the schools run by non-minority groups. Similarly, the controversy regarding the Sabarimala temple, in which the Western universalist notions of gender equality are mischievously used against the Hindus to attack and malign the temple, as also to create an environment conducive to large-scale conversion to organised monotheistic faiths.

The default discourse in India, whether in academia, politics or media, is not friendly to Indic communities. The blatant human rights violations committed against them, in Jammu and Kashmir for instance, are covered up by the predominantly anti-Indic intelligentsia.

The culturally diverse and politically decentralised Indic communities are, by their very nature, averse to forming tribalistic alliances. But given the threat faced by these communities from the organised attacks of cash-rich proselytising missions, a loose consortium aligned with the preservation of India’s Indic-ness is absolutely necessary.

One of the issues you are working on is what you call the 'unconstitutional treatment of Indic educational institutions'. Can you elaborate, since given Article 30, none of it is really "unconstitutional".

This question appears to be premised on the assumption that all that is found in the Constitution is necessarily constitutional. After all, this master document has been subjected to variations to suit political ends at various points of time. Therefore, let’s understand that some provisions of the Constitution may be antithetical to the spirit of constitutionality and at loggerheads with the rest of the document.

In any event, nothing in our primer says that out grievance relates only to or specifically to Article 30 of the Constitution. As on date, the most pressing concern relates to the RTE Act, which transfers all the burden of state welfare onto institutions of the general category, while minority institutions are denied the opportunity to serve the society, all this under the garb of autonomy.

It is difficult to imagine how asking a church-run school to take in a certain number of students from the poorer sections of society would interfere with its autonomy or its Christian identity. Isn’t serving the poor one of the stated objects of the Church?

What the RTE essentially does is that it creates an uneven playing field where the minority institutions have an unfair competitive advantage, leading to a closure of many schools in the general category. It is this lopsided application of the Constitution we deem as unconstitutional.

Further, even someone with a very superficial acquaintance with Indian society will tell you that India is a land of great diversity. This diversity comes from the fact that culturally, there is an absence of the majority-minority dichotomy among the native traditions because with thousands of panths and sampradayas, Indic society is, in reality, a complex mosaic of microscopic minorities who have peacefully co-existed for several millennia through an unstated code of mutual respect, a value that is missing in the conceptual tool kit of those organised monotheistic faith systems which seek to derive advantages that come with the minority tag. Thus, there is an acute need to re-examine some fundamental assumptions in the Constitution that are remnants of the colonial era.