M M Keeravani: A Man Of Many Names And Parts 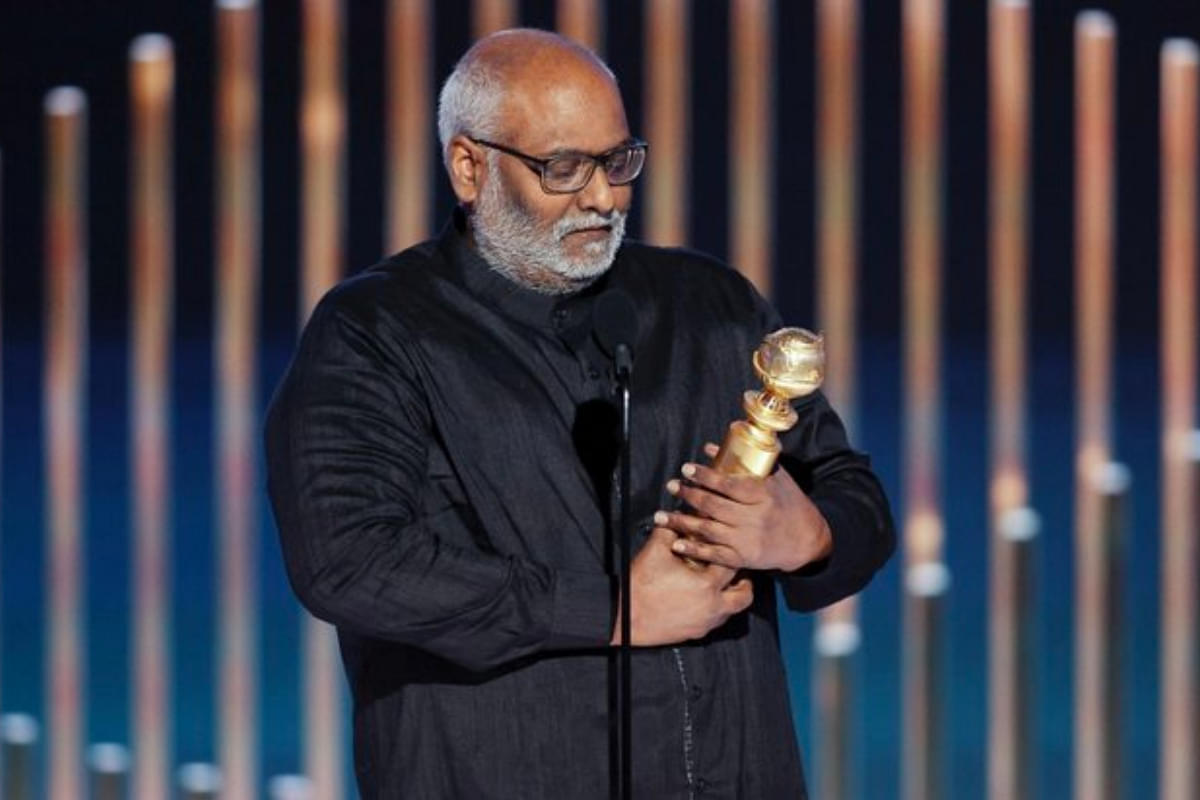 In the year 1990, one of the greatest directors of Tamil film industry, K Balachander (KB), was looking for a new music composer to work with.

He had developed some difference of opinion with Ilaiyaraaja, himself India's greatest music director, during their 1989 release Pudhu Pudhu Arthangal.

Now, KB had a connoisseur's ear for music, and all his films right from the ‘60s were known for great songs.

So when such a man was in the market for a new music director, the industry was watching with keenness as to who he would tango with.

KB's first movie after Pudhu Pudhu Arthangal was the experimentative Oru Veedu Iru Vaasal, a film that featured no songs. For the background score, he settled for V S Narasimhan.

But for his 1991 film Azhagan, a film that had Bhanupriya as a dancer and an important plot-furthering song, KB had to choose someone who could deliver top-notch numbers. And the veteran went for the then little-heard Maragathamani.

The industry was more than surprised by his pick. Margathamani, who operated under his real name M M Keeravani in the Telugu film industry, had just four or five films in his kitty till then.

None of them was a great musical hit. At any rate, there was nothing of note for somebody like KB to draft Keeravani in his prestigious venture.

But KB was not going by mere hunch. He had this famous eye for spotting talent. And with Maragathamani too, he was bang on target as Azhagan's songs became instant hits.

They continue to enjoy a good fan base. Though the orchestration was typical, the tunes rang fresh and young.

Sangeetha Swarangal Ezhazhe Kanakka seamlessly dovetailed into the Doordarshan's slow montage title music. The Saathi Malli Poocharame number floated on the lyrics, which in the context of film, was important.

The Thathithom song, in Dharmavathi raga, effortlessly segued into a rousing ending based on Michael Jackson's Liberian Girl. But it was the Mazhaiyum Neeye Veiyulum Neeye that stood out for Maragathamani's talent for creating a song that stood on the weight of its light and lilting tune.

The rare '7/4 rhythm' added an extra layer of allure to the mood-lifting melody.

Listeners were impressed, and so was KB as his film production house immediately offered its next movie Nee Paathi Naan Pathi (helmed by director Vasanth) to Maragathamani.

And the man again delivered adequately, especially the Nivedha song whose lyrics comprised just that name with the rest of the song ad libbed on typical swaras (SPB sounds so fab in this number).

By 1992, KB's film house Kavithalaya had unearthed A R Rahman, but even then the director went with Maragathamani for his two subsequent movies Vaaname Ellai in 1992 (announced alongside Roja) and Jaathi Malli in 1993. That was KB's vote of confidence.

In a sense, the Golden Globe Awards that Keeravani has got for the enjoyably rambunctious Naatu Naatu in RRR is a delayed echo of the stamp of approval that someone as discerning as KB gave him so early in his career.

For those of us who have been following his career from the early ‘90s, across Telugu, Tamil and Hindi languages, the labeling of Keeravani as 'Bahubali music director' or 'RRR music director' comes across as being a criminally lazy description.

The man has been scoring music even before many of those writing those articles were born.

Even the popular narrative that he was someone unearthed by Ram Gopal Varma through his 1992 movie Kshana Kshanam seems a convenient ploy to appeal to the northern Indian populace.

To be sure, KK made him a big force in Tollywood. But before it, he had delivered Azhagan and announced his arrival as a music director to be taken seriously.

Of course he later chose to focus mainly on Telugu films because he was most comfortable in them.  He also dabbled in Hindi music under his other name, ‘M M Kreem’.

Talking of many names, it is possibly a reflection of some endearing (and puzzling) idiosyncrasies that seem to run in his family (his brother Kalyan Ramana, a music director in his own right, has also changed his name, well, at least 4 times).

Keeravani is also known to be a believer in auspicious times. There are many stories in the industry about how we would wait in his car till the right time arrived for him to alight, and make an entry at a function or some such engagement.

Back in the’ 90s, Maragathamani gave an interview to a Tamil magazine in which he strangely said that he 'hated music' and 'hardly listened to it'.

Many of us who read his words were puzzled that an (then) up and coming music director was not interested in music. But then again, it was perhaps an outcome of a restless spirit residing in him and driving his creative juices.

In 2014, he famously announced that he would retire on 8 December 2016 as it would mark 27 years of his stint in the industry—he had  recorded his first song on 9  December 1989 at Prasad Studios, Chennai. But luckily he did not stick to his plans.

For, the two Baahubalis with his cousin S S Rajamouli happened after his announcement, and of course, RRR, which has fetched him international laurels.

As a musician too, Keeravani has been a bit of an enigma. He has had a long and storied career for over three decades.

He has numerous hit songs under various directors and across languages. The internet is now awash with plenty of playlists of his best numbers.

In his mother-tongue Telugu, the list is understandably longer. Among his more famous films are (an individual Telugu playlist will be too big): Gharana Mogudu, Sundarakanda, Allari Mogudu, Aapadbandhavudu, Matru Devo Bhava, Major Chandrakanth, Pelli Sandadi, Pavitra Bandham, and Annamayya.

The last-named fetched him the National award for the best music director — his early classical training (he is a trained violinist) stood him in good stead in this film. Of course, his songs for Rajamouli films have always been chart-busters.

Keeravani, who began his career working under the music directors Chakravarthy and Rajamani, is on record saying that he has been inspired by the likes of  K V Mahadevan, M S Viswanathan, S D Burman, R D Burman, Bhimsen Joshi, and, inevitably, Ilaiyaraaja, whom he practically reveres.

But despite producing songs and scores of immense popularity and across genres over so many years, if you look for a Keeravani signature in his numbers, you may be a bit stumped.

Perhaps that is where the man has faltered a bit. His songs have always been, as they say, in service of the film, so much so that he may have failed to create a long-lasting creative stamp for his own self.

But it is what separates the great music directors from the good ones.

Sounding the same (which is what many of the modern music directors do) should not be mistaken for the mark of uniqueness.

If you listen to great music directors like Ilaiyaraaja, Salil Chowdary, R D Burman, A R Rahman, you can instantly make out their sui generis brand on their songs.

It would be perhaps in the inimitable and improbable orchestration as in the case of Ilaiyaraaja; Salil organically melded Western melody lines with his own pahadi music influence; Rahman uses instruments and voices in an unconventional fashion.

What of Keeravani? There are literally hundreds of songs from him, but his own unique impression seldom comes across in them. This is perhaps the only criticism that you can lay at his door.

But the man has more than made up for that by remaining relevant across generations.

He has an innate understanding of the nature of the film and the songs' lyrics (He is a trained lyricist himself). He knows what works on screen and what appeals to the modern tastes.

At 63, he is able to create music that is appealing to the new-gen and is winning international awards.

Keeravani has kept himself closer to the ground and has also never talked himself up. And although he is a certified legend of Telugu music industry, Keeravani quickly, and always, disabuses any suggestions on his musical greatness.

A coveted award like the Golden Globe would obviously enthuse him to continue further, but his focus is now more inclined towards his family. He has always provided a helping hand to his close family members to make a mark.

He uses his brother Kalyan as a sound supervisor. His son Kala Bhairava is a regular singer under his baton—he is also one of the singers of Naatu Naatu.

Kala Bhairava also chips in with musical arrangements for his dad. Keeravani's elder son is trying to make a mark as an actor. Keervani's biggest pillar of support is his wife Srivalli.

In music, timing and rhythm is the key. So it is in the life of Keeravani.