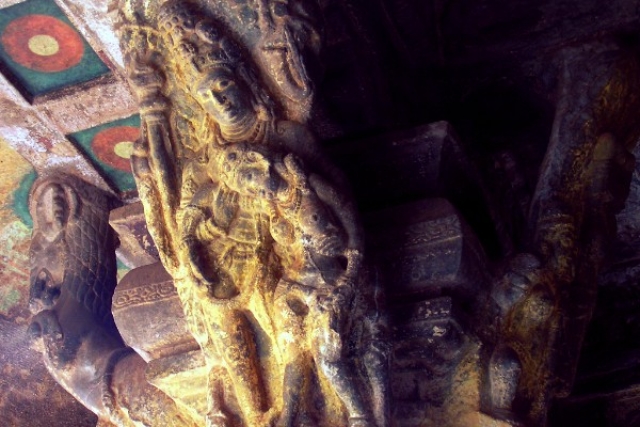 Apsara-Devangana, popularly known as Madanika, are the damsels depicted in sculptural forms in Karnataka’s temples. The sculptures in Hoysala temples are especially widely popular. Artists used this art genre to decorate the outer walls of the temples; the exquisite carvings, minute details of jewellery, costume, standing postures, and contours with accentuated lines, and the overall depiction of the damsels account for the beauty of these images.

Apsaras form a part of the group of demigods in the chronicle of the divinities, and find a mention in many ancient Indian scriptures and iconographic texts like Chitra Sutra of Vishnu Dharmottaram, Vatsayana’s Kamasutra as well as architectural texts like Manasara, Manasollasa, Aparajita Pruccha, Shilpa Ratnakara, and Sritattvanidhi. The duty of the Apsaras is to take orders from the higher divine beings and act accordingly. They are also singers, dancers, and, in general, entertainers as well as assistants of the gods.

In Indian art and architecture, these damsels have been a subject of great interest for decorating temples. Interestingly, they are not restricted to Hindu art alone; Buddhist stupas, monasteries, and Jain temples, as well as rock-cut temples, too, have many of these depictions. Right from the earliest example like Didhargunj Yakshi (chauri bearer) to those in Barhut stupa (now preserved in Indian Museum, Kolkata) and Sanchi and Amravati Buddhist stupas have their Madanika images.

Sculptural art in Karnataka has contributed greatly to the tradition of Madanika images. The culminating point of their class, imagery, and style may be ascribed to the Hoysala sculptures, as seen at Belur and Halebidu.

What’s interesting to note is that the Madanika sculpture tradition was introduced by the Badami Chalukyas for the first time on a grand scale in Karnataka. The artists who were responsible for executing plans and for conception of sculptural programmes in temples also dedicated a considerable space for the Apsaras.

Apsara, Mithuna, and other figures of this genre occupy interesting spaces in temples. They decorate the pillar capitals, architraves, pillar spaces, and ceilings. An example of an attendant Apsara carrying a flower basket in Ardhanari Shiva panel has a serene representation of a typical Chalukya image. Standing in an eased form, she holds the basket, attending to the Parvati-side figure of Ardhanari. In the same cave temple is a flying airborne figure of Vidyadhara couple depicted on the central ceiling of the cave temple. Here, both the figures are shown as though they are flying amidst the cloud, as it gives the sense of being in the heavens.

Among the well-known and best-preserved set of images is found in Cave-III of Badami. The cave was consecrated in 578 AD and excavated by Mangalesha, half-brother of king Pulakeshi-I. The cave temple is dedicated to Maha Vishnu, according to an inscription in the cave temple.

The verandah of the cave temple has pillars, and these pillars have bracket figures. There are Mithuna and Apsara figures carved on the brackets in slanting postures. Nagaraja and his wife, Shiva and Parvati, Kama and Rathi are depicted in this cave temple for the first time as amorous couples. For instance, in the Shiva-Parvati sculpture, Parvati is intoxicated, and Shiva is helping her rise. These are commonly used as the bacchanalian subjects. Badami Chalukya artists also employed these subjects at Aihole, Pattadakal, and even in Mahakuta temples. This period laid a foundation for the development of the Apsara and Mithuna genre of sculptures in Karnataka.

The later Chalukyas, who inherited the nuances of the Badami Chalukya art and architecture, used similar subjects for the decoration of their temples. One finds in these caves some of the finest examples of the Apsara as well as Mithuna sculptures of this period. The temples of the period are the precursors of the Hoysalas, dating from 900 AD to 1150 AD. The examples discussed here are from 1070 AD to 1100 AD.

The Apsara sculpture at Ishwara Temple at Jalasangi in Humanabad taluk of Bidar district is representative of the fine images. (The place is about 11 km from Humanabad.) The entire wall of the temple is decorated with many Apsaras depicted in various stances. Of these, the image of “Patra Lekhana Sundari” (the letter-writing damsel) is particularly interesting. The damsel is standing in an artistic posture as she has turned and is looking up, holding a scroll and pen. It is actually engraved with the old Kannada script which refers to king Vikramaditya-VI.

In another example from this temple, an Apsara is holding a parrot and speaking to the bird. She is identified as “Shuka Bhashini”. The damsel’s posture is supple and strong when she is standing. The artist is quite minimal in employing ornamentation and jewellery in the figure. These typologies are commonly found in the Hoysala period, too.

Among the later Chalukya temples, the finest examples of Apsaras are found in Dodda Basavanna Temple, Kuruvatti. (Kuruvatti is in Hoovina Hadagali taluk of Ballari district, 36 km from Ranebennuru.) The temple, situated on the banks of river Tungabhadra, is an excellent example of Dravida architecture with Eka Kuta structure. The temple has three damsels decorating the façade pillars of the main entrance. One can notice that these images have been detached from the wall, but stand slanting to the projected capitals. The images are carved with highly delicate details. The floral motif behind the images are partially damaged, yet one can imagine the fine workmanship of the artist. All the figures are majestically rendered with exquisite carvings. The damsel figures have pedestal-like projections which are supported by the bhara vahaka (weight-bearers) figures.

In the carving of the drum-playing Apsara, she is standing in tribhanga (triple bent) posture. The details of the way in which she is holding the drum, and playing with force, is excellent to see. The later Chalukya artists had experimented and achieved great success in rendering the minute details of the images. The artistic nuances inherent in their precursors now transformed in these examples. It is necessary to remember here that these Apsara figures are carved almost 30-50 years prior to Belur Chennakeshava temple Madanika sculptures.

Belur Chennakeshava temple was built by Hoysala king Vishnuvardhana in the year 1117 AD. It was built to commemorate his victory over the Cholas, who had occupied Gangavadi region (Old Mysore and Bangalore region). He invited artists from later Chalukya regions to work on this new mega project, the Chennakeshava temple, which is undoubtedly a magnum opus of Hoysala art and architecture.

Any visitor to the Chennakeshava temple would be mesmerised by the beauty of the Madanika images. They are placed at a 45-degree angle, as if they are looking downwards towards the visitors. They not only serve as decoration for the temple but also represent the great skill of the artists. They also represent contemporary culture of Hoysala society. Hoysala Madanika sculptures represent the zenith of classical sculptural art in Karnataka.

On our next Swarajya Heritage tour, scheduled for 12-14 October, we are visiting the three major homes of Chalukya architecture – Aihole, Badami, and Pattadakal. If you’d like to join us – and we highly recommend it – do check out the details about the trip and ticket requirements here.