Madhya Pradesh: Why Ujjain Is The New Cultural Power Centre Of The Modi-Chouhan Double Engine Sarkar 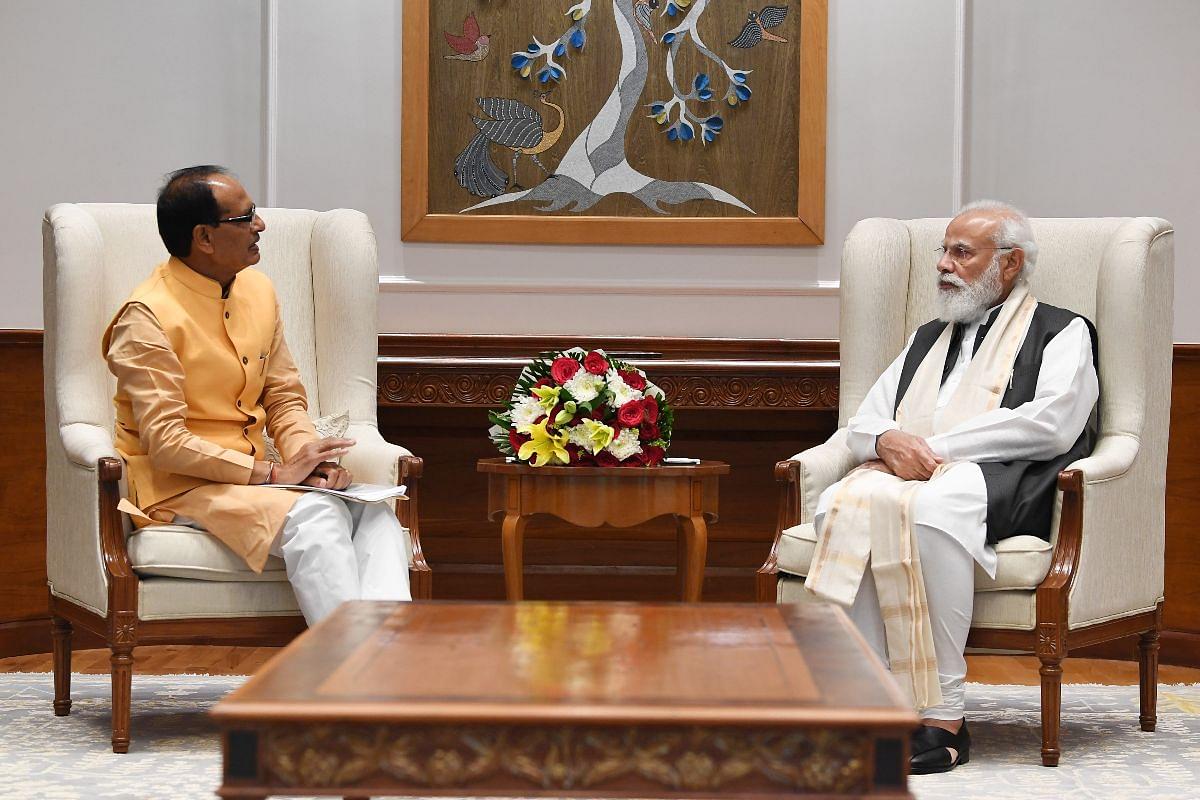 Ujjain is preparing for opening of the first phase of the Ujjain Mahakaal Corridor. In March this year, Madhya Pradesh Chief Minister Shivraj Singh Chouhan organised a Deepotsav, a festival of more than 21 lakh earthen lamps on the ghats of the sacred river Kshipra, on the occasion of Mahashivratri. The glow of lamps at the ghats of Kshipra became a reminder of river Saryu in Ayodhya, where Uttar Pradesh CM Yogi Adityanath has ignited a culture of preservation of tradition on Deepavali.

The Chouhan-led government is effectively taking steps towards rejuvenating the existing folk cultural narratives, the civilisational treasures in Madhya Pradesh. In addition to that, it is undertaking the tough and tiresome but politically-rewarding work of ushering in tangible change around vital centres of pilgrimage in Ujjain.

Currently, the Madhya Pradesh government is celebrating a unique concept for a reawakening of local pride centered on the villages and cities of the state. Titled 'Gaurav Diwas', the concept is aimed at continuing cultural revival with the involvement of locals. At a time when the Narendra Modi-led government is celebrating eight years at the centre, Madhya Pradesh seems ready to unfold its own story in the centre-state partnership in cultural preservation.

Gaurav Diwas is just one of several such internal initiatives in the state strengthening the people-culture-village-development connection in the state. ‘Gaurav’ means pride. CM Chouhan recently told a news channel that: "Gaurav Diwas PM Modi's idea and I am implementing it in MP”. Though the 'Gaurav Diwas' is conceptualised to celebrate local pride, this writer believes that MP will see itself transforming the meaning of 'gaurav' not only internally but in Bharat's context from Ujjain in 2022-2023 and beyond the Simhastha of 2028.

Ujjain: where Shiva and Shakti reside -- the abode of Mahakaal is also the home of Mata Harsiddhi Mandir, one of the 51 shaktipeeths. Imagine the transformation assimilated in a temple complex that's going to expand by nearly eight times its present size -- 2.82 hectares to 20.23 hectares, roughly, say four-five years before the Simhastha of 2028 with an upgrade of amenities and facilities for the pilgrim.

Amid the shift and shunting of stone, brick, mortar, old and new, the Ujjain Mahakaal Corridor will make a renewed space for Ujjain to be able to stay and remain grandly empowered as the bearer of masculine divine and feminine divine. Last month, this writer was in Ujjain, standing at the gate of the Triveni Kala Sanghrahalaya, a museum that houses and exhibits artefacts and works associated with the history and cultural tangible and intangible treasures of the state.

During March and April, work around the boundary walls of the Triveni Sanghrahalaya, Ujjain's pioneering museum and institution for art, culture, preservation, display and performance, commenced amid melts into dust and dusk. The corridor in its sprawled expanse assimilates the Sanghrahalaya. It's here, this writer attended performances of Malwi folk music last month. Artistes from Malwa and other regions presented folk songs dedicated to Mahakaal, Parvati and Ganesh. These are compositions desperate for a wider dharmic audience and documentation.

The corridor and the Triveni Sanghrahalaya in intimate proximity exhibit the two different characters of Ujjain that embrace each other, several times unknown to even visitors. The Simhastha of 2016 brought artisan Pappu Kumar Lauhar, a resident of Chittaurgarh (Rajasthan) to Ujjain. The pilgrimage would prove to be a turning point for him. He decided to move from Chittaurgarh in Rajasthan to Ujjain. His ancestors were masters of the craft of making weapons.

Today, he makes replicas of traditional Indic weapons and sells them at an outlet near the Mahakaleshwar Temple in Ujjain, in the midst of a busy row of other outlets where pilgrims to the Jyotirling stop by for pick from a wide diversity of tangibles of faith, ritual, celebration of dharm and decoration. Making weapons is not just a source of income for Pappu Kumar Lauhar. It's an expression of his dharmic pride that gives the devotees who are walking towards the Jyotirling and back, a reason to pause, appreciate, and collect items of his craft.

Driven by his devotion for Mahakaal, he wanted to offer his art to the fellow devotees of Mahakaal. He made Madhya Pradesh his new home and base. He is eager to offer something from his body of work in the craft of traditional weapon replicas to Prime Minister Narendra Modi, who is expected to visit Ujjain for the lokaarpan of the first phase of the corridor.

"PM Narendra Modi has done so much for our nation, dharma and sanskriti. If I get a chance to offer an artefact from my work to him, it will be the biggest moment of my life," he told Swarajya. This little story is important to insert because it reflects how craftsmen would be eager to show their art making Ujjain their base or second home.

PM Modi was expected to visit Ujjain during the second week of June for the lokaarpan (dedication to the public) the first phase of the Mahakaal corridor expansion. Madhya Pradesh CM Chouhan has at different occasions called on PM Modi to invite him to Ujjain for the visit and dedication programme. However, sections of the media have reported that PM Modi's visit will have to wait owing to the model code of conduct coming into effect. The state panchayat polls will be held in Madhya Pradesh beginning 25 June. The dedication programme is expected to commence in July after the declaration of the panchayat polls results.

Preservation and work on Rudra Sagar and its connection with the sacred Kshipra river is part of work in the Ujjain Mahakaal Corridor. This is one factor that will go a long way in preserving an important natural facet associated with the Mahakaal Mandir, its history and tradition. For the Mahakaal Corridor, the rejuvenation of Rudra Sagar, its connection with Kshipra is a cultural must. Once Rudra Sagar finds its flow with some help from the sacred Kshipra and the rains this year, new character and depth will embrace the temple corridor.

Mahakaal pathh, part of the first phase of the Ujjain Mahakaal Corridor expansion, will be opened to the public. During April and May work on the pathh was in full swing on the Mahakal Corridor. Sculptures, idols, murals and other depictions of deities and episodes from the sacred texts surrounding Shiva were finding their place and finishing touches. Visually engaging storytelling on the walls via these depictions will face the devotees during their walk towards the garbhagriha.

The entryway near the Triveni Kala Sanghrahalaya is where several lesser discovered aspects of Ujjain as a cultural seat for Bharat and India, meet. Several sets of workers and machines in the month of March, April and May were focussed in the different areas of work on and alongside the boundary wall on outer and other side of the Sanghrahalaya. The path will lead to the Shaktipeeth Mata Harsiddhi Mandir, leading the devotees at the intersection where they find themselves viewing the shikharas of the Jyotirling and the Shaktipeeth.

Once open, the Mahakaal plaza will lead the devotee to the Mahakaal corridor via the pathway. The corridor will include a crafts bazaar where the wide diversity of tangibles associated with the devotion for Mahakaal will be available along with the local expressions in art and craft. The different elements of ancient knowledge and present Indic rejuvenation in Madhya Pradesh are all falling in place.

At the lokaarpan of the first phase of the corridor, the contribution of CM Chouhan to Madhya Pradesh in keeping the Indic "gaurav" ignited, will come full circle. Ahead of the Vidhan Sabha election in Madhya Pradesh, Ujjain has emerged as the cultural power centre of the double engine sarkaar and will be counted as a centre of electoral force in 2024.

Also Read: Cultural Illiteracy Is A Raging Epidemic: Time To Act Is Now