Mani Ratnam, A R Rahman Irk Fans By Joining Hands With Lyricist Vairamuthu, Who Has Been Accused Of Sexual Abuse 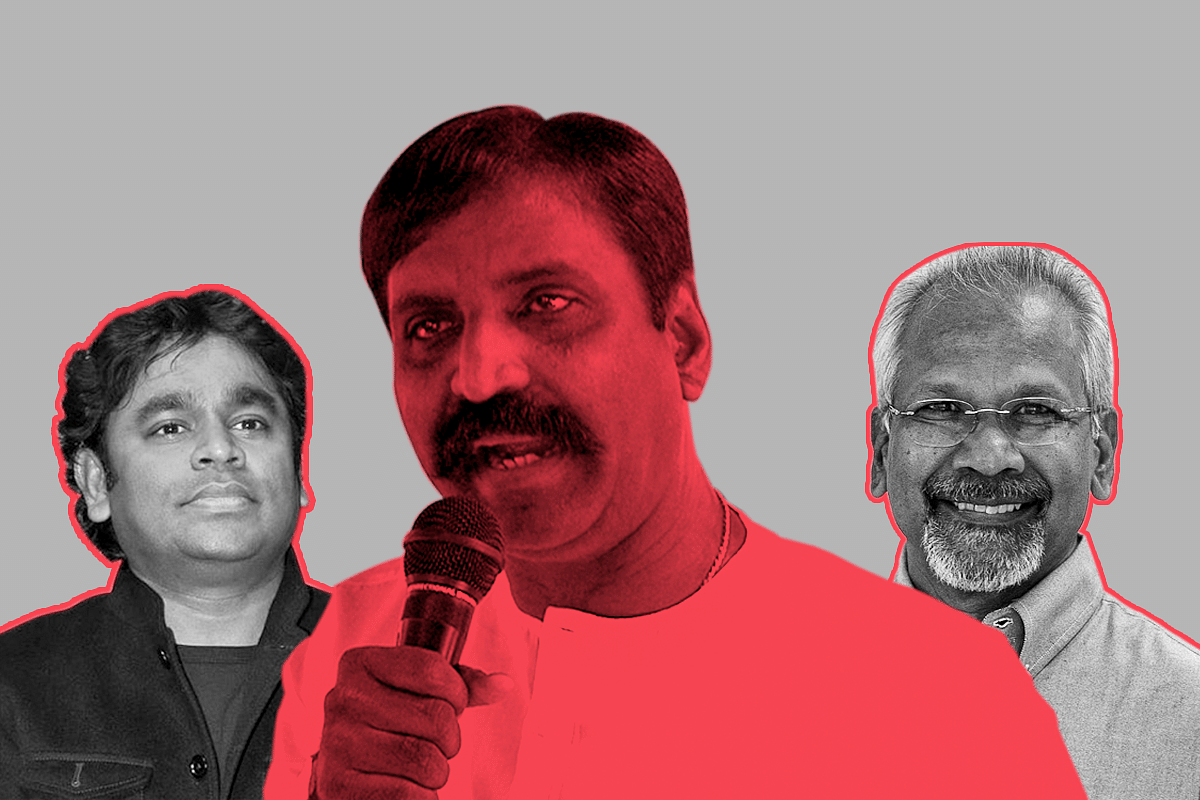 In 1991, when Mani Ratnam joined hands with A R Rahman for the iconic movie Roja, they began a unique journey in the Tamil film industry that continues to this day.

Tamil lyricist, Vairamuthu, was roped in by the combination and the three — Rahman’s music and the lyricist’s lyrics in a Ratnam movie — has always been welcomed with open arms by film buffs.

This was until last week when the news of Ratnam and Rahman teaming up with Vairamuthu was made public.

Ratnam's latest venture is to make the classic Tamil novel Ponniyin Selvan written by Kalki Krishnamurthy into a film. Rahman will score the music for the project . The film will have a dozen songs and last week, Vairamuthu told the media that he will pen all of them.

Ratnam and Rahman fans are upset over this development since Vairamuthu has been accused of sexually harassing popular South Indian playback singer and dubbing artiste, Chinmayi Sripada, besides a few other budding talents in the film industry.

Sripada’s travails came to light during the #MeToo movement when journalist Sandhya Menon began tweeting on various victims of sexual harassment. Accusations against Vairamuthu began with an anonymous woman’s tweet complaining how the lyricist attempted to abuse her.

At least three more women came forward and complained about Vairamuthu, including one who said she considered him to be her grandfather but his behaviour was in contrast to his stature. The woman said she was invited by the lyricist when she was 18 or 19 years old on the pretext of “appreciating her work” but he attempted to misbehave with her.

Sripada alleged that Vairamuthu sought sexual favours from her, for himself as well as for a film producer. A third victim said the lyricist attempted to kiss her at his Besant Nagar residence in the guise of wiping buttermilk from her lips.

The #MeToo campaign against Vairamuthu resulted in only one thing: Sripada was sidelined, with her career as a playback singer and dubbing artiste almost ending.

In response, the lyricist didn’t deny the allegations directly but said, “ruining and disgracing the reputation of well-known people had become a fashion now.”

Sripada was specifically targeted by the Tamil film industry; her membership in the Dubbing Artistes Association was cancelled.

She said in an interview with The Hindu that #MeToo victims were being punished to warn other prospective complainants. She said she was singing at least three songs a day before she made the complaint, but wasn’t getting any work now.

The then Association chief was the noted film actor Radha Ravi who was a member of the Dravida Munnetra Kazhagam (DMK). Vairamuthu has been able to get away with the allegations since he is also a staunch supporter of the DMK.

DMK didn’t initiate any action against Vairamuthu. Nor did it seek any clarification. However, when Ravi made a derogatory remark against actor Nayanthara, he was expelled from the party.

DMK chose to expel Radha since Nayanthara was acting in a movie that starred the party president M K Stalin’s son and its youth wing chief Udayanidhi Stalin.

Since Narendra Modi took over as Prime Minister in May 2014, the Tamil film industry has never missed an opportunity to criticise his initiatives, including on Goods and Services Tax and demonetisation.

On the #MeToo accusations, however, the Tamil film industry has chosen to practise a deafening silence. This has been in contrast with Bollywood’s measures against those accused by #MeToo victims.

Sripada’s complaint fell on deaf ears with neither the DMK, the film world or any law agency taking cognisance of it. The allegations even took a casteist turn with the playback singer’s caste being derided and some dubbing it as an “Aryan conspiracy”.

Vairamuthu had warned that he would resort to legal recourse against the allegations but nothing has progressed beyond that.

Commenting on Ratnam roping in Vairamuthu for his latest venture, a Twitter user wondered why the popular film director couldn’t stand up against an accused in a sexual abuse case when he could sign a petition against mob lynching in the country.

Rahman’s sister, Reihanna, commenting on the Sripada episode, said her brother was unaware of the sexual harassment episode and that Vairamuthu had misused the musician’s name to trap his victims.

Rahman himself responded to the allegations saying he was shocked to see the names of the accused and victims while expressing his support for the movement.

Rahman scoring music for Vairamuthu’s lyrics has earned him the ire of his fans with one person pointing out what his sister had said. Another said he couldn’t believe that the Oscar and Grammy awards winner, who has composed a tribute song for women, chose to work with a lyricist accused of sexual offence.

Mani Ratnam is yet to make an official statement on Ponniyin Selvan, though media reports say he has roped in some big names such as Vikram, Aishwarya Rai and Radhakrishnan Parthiban for his latest project.

But some of his fans are already up in arms over his association with Vairmuthu.

The movie is slated to begin shooting in December. But before that, more controversies over the project are likely.

With #MeToo resurfacing, this sticky period may not be very comforting for other stalwarts in Tamil Nadu who may have skeletons in their cupboards.