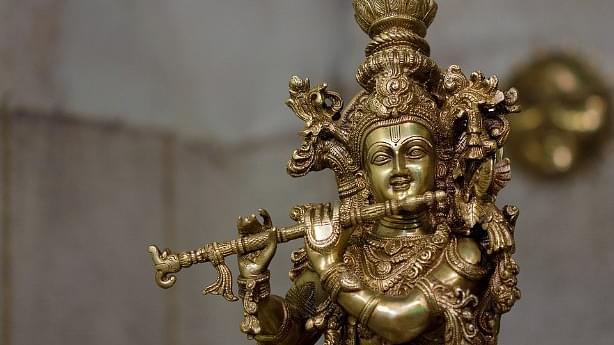 An idol of Lord Krishna

Krishna Gopeshvara: The Truth of Vrishnis by Sanjay Dixit. May 2018. Bloomsbury India.

As seasons pass, one generation gradually gives way to the blossoming of another. And while the change of guard is slow, the pace at which the ways of life change is dizzying. It then becomes incumbent upon the learned and elderly to carry the word of the ancients forward.

One such humble attempt is made by author, columnist, and Indian Administrative Service Officer, Sanjay Dixit, in the form of a new, upcoming book titled Krishna Gopeshvara: The Truth of Vrishnis. This is the first in a three-part series on Krishna’s life, the Lord Krishna Trilogy, that is kicked off with a retelling of the key moments in the early life of Lord Krishna.

Swarajya reached out to Dixit to know more about the book, the “rational perspective” from which he is said to have revisited Krishna’s life, Kutil Dharma, the contrast between Rama’s and Krishna’s lives, and more.

Excerpts (edited) from the interview:

Congratulations on the upcoming release of Krishna Gopeshvara. When we read about the book on the web, we learnt that the book is meant to explore Krishna's life from a rational perspective. So, is it safe to say that your Krishna will not be a god, but a human being?

Thank you for the kind words. I wanted the message of Krishna communicated effectively to today’s millennial youth as well. It is important to realise that when you look at Krishna from a rational perspective, all his actions not only appear plausible, but also justified.

As far as Krishna’s projection not as a god but as a human being is concerned, I think it would be fair to say that. In any case, my concept of ishvara (god) is very much like it is is in Ishopanishada – “ishavāsyamidam sarvam yatkinchitjagatyāmjagat” – every part of this universe is imbued with the presence of ishvar. So in that sense, every human being is ishvar in the broad sense.

The Krishna of my book is just a gifted human being who is aware of his own self, and of things around him, a little more than others. A gifted human being that is able to discover his inner self and One Energy and yet continues to live among people has been termed as an avatāra in our tradition. So Krishna is an avatar, which means an extraordinarily self-aware human being that has not retreated to forests but has chosen to live like a normal person among normal human beings – with a conscious decision to spread goodness.

The book is also said to place the “Krishna vs Kamsa” conflict in a larger context of a clash of narratives. What would these narratives be, and how did you decide on creating your plot along these lines?

The clash of narratives has been a constant theme in the Indian tradition. Beginning with Rigveda and through the epics and the Puranas, you have a harmonising narrative clashing with a divisive narrative. Starting with Vāmanavatāra, whenever there is a tendency for a man to declare himself at par with god and combine religious and political power, an avatāra comes and restores the Sanatana Dharma. Delusions of men like Hiranyakashipu, Bali, Rāvana, and Kamsa were destroyed by these great human beings called avatāras.

Kutil Dharma is just a metaphor for a totalitarian cult that combines political and religious power in one person. It is the opposing narrative to the plural, inclusive, responsibility-based Sanatana Dharma of the seeker. Tyrants through the millennia have demanded loyalty to their own person. So Kutil Dharma simply represents this primal urge among tyrants to build a support system of a narrative.

How did you choose Kutil Dharma as the narrative to oppose that of Krishna?

Kamsa’s character in our tradition holds many clues as to the kind of narrative he wanted to build in order to overawe and overwhelm his people. He is supposed to have even demolished temples – an act with the singular purpose of subduing his people with tyranny and oppression. We do have modern variants of this kind of behaviour.

Does it fit into any of the classical saddarshana – the six philosophies of Sanatana thinking?

Kutil Dharma is projected as violent monotheism in your book. It did not seem to exist in those times. Are you trying to indirectly hint at something?

Monism or ekeshvaravāda has been a very important feature of the Sanatana tradition. The spiritual enquiry that it entails, and the burdens it places upon the rulers, has often irritated the tyrannical and the totalitarian king. At the same time, the devotional path has always existed in the Sanatana tradition for those who did not fancy the intellectual rigour required by monism. So you had interregnums in our historical tradition, where kings fancied themselves as the overlords of the universe, and tried to impose monotheism on the populace by creating a cross between monism and devotional forms, and tried to impose it with violence with them at the centre of worship.

Hiranyakashipu and Bali are but two examples. Ravana also got delusional, as did Kamsa. You would see the same strain in Jarasandha. Duryodhana was well-schooled in dharma, but even he had his delusions. So what distinguishes monism or advaita from monotheism or creationism is the justification for violent imposition implicit in monotheism. We will see in this book how Kamsa is in a dilemma between Sanatana Dharma and Kutil Dharma, and eventually perishes.

The other buzz around your book is that Krishna is shown as violent? What do you say to that?

Krishna of the Sanatana tradition is Yogeshvara, so he is detached from the results of his actions – the classic karma and karmaphala doctrine. To make it simpler, I have described the two as kriya and karma. Krishna is very clear that a seemingly violent action (kriya) cannot be termed as violent karma unless the mind is violent. Krishna’s equanimity in every situation and his ability to weigh his kriya in tune with the highest dharma required at that point is unique in our entire lore and history. That is why his actions are called ‘leela’ in the devotional traditions. His ahimsa is not the ahimsa of Gandhi or Buddha. Ahimsa for him is a non-violent mind that has no issues with giving seemingly violent punishments, or resisting evil with apparent violence in order to uphold the highest requirement of dharma at that point. He epitomises an important strand of modern thinking – that unlimited tolerance is the end of tolerance. So he preaches acceptance, respect, and rejection, but not tolerance of anything that is wrong.

From Krishna to Radha – can you explain to our readers your thought process behind depicting Radha as a yogini?

It is well-known that Bhagavata does not have the Radha story, but it caught on in the devotional traditions later. Radha is always depicted as the inspiration or the shakti aspect of Krishna. She is also generally thought of as being much older than Krishna. Such a personality is more likely to be a teacher or a mentor rather than a consort. Radha’s profound character is best brought out in the Uddhava-Gopi samvad. That is also the cue to the real character of this noble lady. The Yogeshvara in Krishna is inculcated by this yogini, according to my understanding.

From a storyteller’s point of view, what would be your comments on a comparison of the respective stories of Rama and Krishna?

Rama is sugama – easily followed by any layperson because his maryada is the maryada of character. He sets an example by his own character and by putting restrictions around himself. So he is in bondage. He has these bonds of sapeksha dharma or relativity of dharma. When his raj dharma so demands, he has to subordinate his svadharma to it in order to set the right examples to his subjects.

Krishna’s maryada is mental, so he is not sugama – he cannot be followed by a layperson. To follow Krishna, you have to be at his level of detachment. Krishna is free of all boundaries, from all bonds, and from all taint. His mind is that eternal state of bliss from where he can view the universe in the correct perspective and take a decision that is best for the highest dharma. Unlike Rama, who has to worry about the king’s duties and is forced to send his wife into exile so that raja dharma could prevail over svadharma; Krishna’s dharma is much higher. So Krishna nonchalantly declined to be king, and yet was more than a king. He rescued thousands of girls made captive by Narakasura, and had no hesitation in giving them his name in order to give them dignity. He would never be affected by calumny and insults, which could affect Rama. Those who have read Yoga Vāsishtha, which was Rama’s schooling in the higher forms of detachments that Yoga teaches, would be able to realise this difference much more acutely.

No wonder the tradition in North India ascribes 12 kalās to Rama and 16 to Krishna.

Some people have a notion that clockwise Swastika is the only Swastika in our tradition. Without revealing too much, let me just say that this notion is wrong. Swastika can have different forms according to the purpose. Look at a graphic of Kutil Muni, for instance.