Obituary: Dr Narhari Achar, A Student And Scholar Of The Mahabharata, Sky, And Science 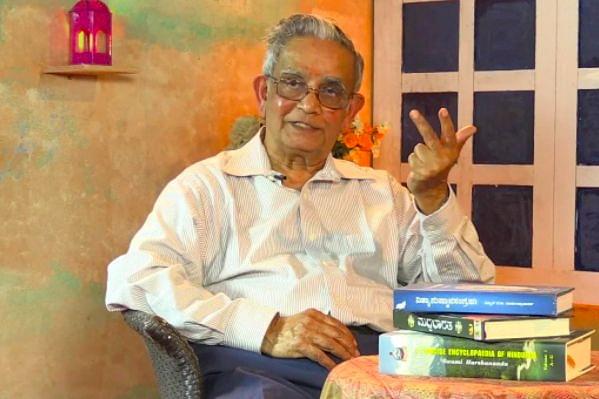 On 28 April 2021, a great scientist and one of the pioneering chronologists working on the dating of the Mahabharata departed from our world. Dr Narhari Achar attained Satgati.

As a person focused on the dating of the Mahabharata, it is really a jolt for me all the while I meditate for his Satgati.

Dr Narhari Achar pioneered dating the Kurukshetra War to 3067 BCE and that is how I know him.

I had the fortune of meeting him in person in 2016 at Delhi as part of the Mahabharata Manthan International Conference attended by the scholars focused on the Mahabharata from all over the world. Last I saw him was in the Kurukshetra War Debate (Tithi Shastrath) online conference held on February 2021.

One of the major areas of Dr Achar’s research was archaeo-astronomy and the application of the Planetarium software. He had special interest in ancient Indian astronomy, where he received international recognition.

Th Planetarium software like Stellarium and Jagannatha Hora can compute and render the view of the sky at any time and at any place in the world including the ancient sky during the time periods of the Kurukshetra War.

Ancient Samskrtam texts of Bharata such as the Vedas and the Itihasa Puranas contain a lot of astronomical information. With suitable interpretation, the Planetarium software can be used to determine the dates of these texts like the Mahabharata and the Ramayana.

His papers on Vedanga Jyotisha are a must read for any researcher focused on the Veda Itihasa Puranas. He has authored many papers on the interesting topic of the 5-year Yuga (Pancha-varshiya Yuga) mentioned in the Vedanga Jyotisha.

The Mahabharata is a valuable asset for any Dharmic researcher focused on the dating of the Mahabharata and for those who have some interest in the enigma of the concept of Yugas. The Maha-Yuga system which currently is defined as the four Yugas: - Rta, Treta, Dwapara and Kali, together believed to span total of 43,20,000 years emerged from the attempts to synchronise the lunar and solar calendars, both of which were used by the ancient Bharatiyas to recognise the flow of time and to seed crops as part of agricultural activities.

Though I know Dr Achar in the domain of Mahabharata research, he was much more than that.

He received his early education in India. He earned his MS and PhD degrees from the Pennsylvania State University. After his Post-Doctoral work at the Argonne National Laboratory, he taught at the Bucknell University, Pa before joining the Physics Department faculty in 1984.

He has been nominated for Distinguished Teaching award and has been awarded Faculty Development Assignment Award, Summer Faculty Fellowship Award at NASA Glenn Research Center, TAF-SIST and TAF-IEL awards, and Professor Emeritus Award.

He had published 110 refereed journal articles, five chapters in monographs and books including five submissions to Biography of Astronomers. He has made hundreds of presentations in National and International Conferences. He was a Life Member of the American Physical Society and was a member of several professional associations. His professional service includes reviewing for several journals and textbooks for publishers.

I join in grief with Dr Manish Pandit, my dear friend and the beloved shishya of Dr Narhari Achar in the field of the dating of the Mahabharata.

Dr Manish Pandit will continue with Dr Achar's work of dating the Kurukshetra was to 3067 BCE and strengthen it further. Dr Narhari Achar will be forever alive in our memories!

Jijith Nadumuri Ravi is the founder of the Website AncientVoice

(ancientvoice.wikidot.com) which contains 23500 pages in Wiki

Takshasila are the sister sites of AncientVoice, focusing on

Greek, Avestan and Tamil literature. Jijith was a former ISRO