Puri Shankaracharya: Temples Must Be Free Of Government Control To Serve Their Purpose 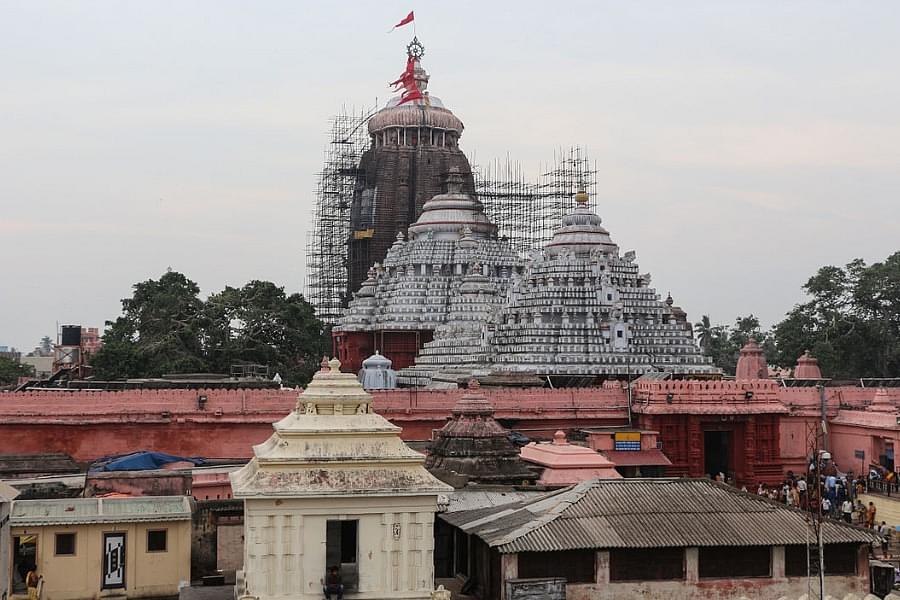 State control of mandirs (temples) and mutts is absolutely undesirable and has resulted in the decline of Indian society, says Puri Shankaracharya Swami Nischalananda Saraswati. In a rare interview granted to Swarajya at the Govardhan Math in Puri on Tuesday (5 June) afternoon, the shankaracharya dwelt at length on many issues that are denigrating values and culture.

Saying that it is wrong for state governments to dictate terms to the mutts and temples and interfere with their day-to-day operations, Swami Nischalananda Saraswati said a large number of temples and mutts that are controlled by states, is being mismanaged. “The process of the state taking over Hindu religious institutions started during British rule and continues till date,” he said.

The Govardhan Mutt chief said state governments in their bid to control temples have destroyed them. “Mandirs are supposed to be centres for shiksha, raksha, dharma, moksha and sanskriti. From ancient times, mandirs were the cultural, religious, philosophical, educational and social centres of all Sanatanis. But once the state took over the mandirs, and due to a number of other factors that were designed to harm Sanatan Dharma and the Indian society, the cultural, social, educational and other aspects of the mandirs disappeared,” the shankaracharya said.

Rise In Mismanagement Of Temples, Mutts

Pointing out that temples and mutts have been taken control of by the governments due to their alleged mismanagement, Swami Nischalananda Saraswati said that the mismanagement of these institutions, which once enjoyed eminence, has increased with their operations being totally opaque. These have turned into dens of nepotism and corruption, he said. “It is the government-appointed bureaucrats who manage the mandirs and mutts, handle (or mishandle, no one knows) the large sums of money collected from them, conduct their audits and submit ‘all clear’ and ‘all good’ reports. No third party is involved in overseeing the affairs and, as a result, there is total chaos, anarchy and corruption,” he said.

“Crores of rupees donated by devotees to some big temples are taken away by the government to fund other projects. Little of it is given to the mandirs for their maintenance, for running their administration or paying proper salaries and emoluments to the pujaris and sevaits (employees), there,” he lamented. “Instead, it has often been seen that funds collected from mandir hundis are used to fund madrassas that are said to sponsor dubious activities. This is totally unacceptable. The actual reason behind the state’s intention to control mandirs and mutts is to gain control of the huge sums of money that are donated to them and the resources they possess, as well as push their political agenda,” the shankaracharya said.

‘Don’t Siphon Off Donations Made By Devotees’

States should neither siphon off the money donated to temples and mutts nor the donations made in kind. “These donations should, instead, be used for the development, maintenance and beautification of the respective institutions, for running them, and for paying the salaries and honorarium of the purohits, pujaris and other sevaits, there. Excess funds should be used for the development and maintenance and running of smaller mandirs that may not be resource-rich.

“Devotees who go to mandirs do not donate cash, jewellery etc to fund madrassas or government projects. It is completely immoral for the state governments to siphon off the donations made to mandirs. This should stop immediately,” he said.

Politicisation is another adverse fallout of government control of temples and mutts. “The “bureaucrats and politicians who get to exercise control over these institutions create divisions between the pujaris and pandas, instigate conflicts between them as part of their divide and rule policies aimed at creating anarchy and, then cite the troubles as justification for controlling mandirs and mutts, he said adding that since the pujaris and other employees are very poorly paid, they fall prey to the sinister designs of the bureaucrats and politicians, and become party to their machinations.

“All these machinations are designed to portray mandirs and mutts, the centres of Sanatan Dharma, in a poor light. Mandirs and mutts are portrayed as hubs of intrigue, of pujaris and sevaits. The pujaris are portrayed as looteras (corrupt and greedy extortionists) who our out to fleece devotees. It is another matter that the actual looteras are the netas (leaders). By such negative portrayals, our Sanatan Dharma is being denigrated and destroyed in a very sinister and systematic manner,” the shankaracharya regretted.

Pitiable Plight Of Pujaris And Employees

Stating that pujaris and other workers have no other means of income, the shankaracharya said that earlier, the donations from devotees and the grants of land etc made by the rajahs and maharajas and the rich sustained them and their families. Now, all that has been taken away by the state. “The pujaris and sevaits are learned, but they do not have the degrees and skills that would get them better jobs, besides, they lack the capital and acumen to start businesses on their own. So, they are left with no option but to harass and fleece devotees. And their acts strengthen the negative perceptions surrounding our mandirs and mutts and also Sanatan Dharma,” the Govardhan Mutt chief said.

“In the olden days, The temples and mutts provided adhyatmik (spiritual) leadership and helped the rajahs and maharajahs administer their provinces. But this has disappeared, resulting in the misgovernance and chaos that we see all around us. “The Adi Shankaracharya integrated Bharat through the mutathas, peethas and dhams. But all that has been completely negated by the (Hindu Religious) Endowments Act and its successive legislations that have allowed governments to take control of mandirs and mutts. These institutions also provide security to society. The Adi Shankaracharya laid down the system of collecting dharmic tax and this was used to raise and maintain an army of Naga Sainiks and also to maintain mutts, mandirs, dharamshalas and other institutions,” he said.

He said, “Unfortunately, no political party since India’s Independence has tried to make Bharat what it should be, adding that none of them has realised or acknowledged that in ancient Bharat, things were good because the mandirs and mutts were the centres for preserving and propagating shiksha, dharma, moksha, sanskriti and suraksha. “No government till now has done it. Because they know that they (the political parties) will become irrelevant if they restore the mandirs and mutts to their original glory and make them what they were,” he said.

“Bharat’s rulers have, unfortunately even after Independence, followed the British model of governance, which was aimed at demolishing and destroying our Sanatan Dharma and Sanskriti. There is a lot of stress now in, for instance, mahanagars (cities). Building more and more cities was a British kutniti (evil policy). The British knew that urbanisation that would draw people from villages to cities would completely break the social and family structures, and it would be far easier to control, brainwash and indoctrinate people in cities than in the scattered villages. The breakdown of the joint family structure is just one fallout of urbanisation and we know what the effects of this have been. Youngsters no longer imbibe the values and sanskriti that made Bharat great once.”

Criticising “urbanisation for the destruction of the environment, he said there is nothing shudh (pure) in a city, including the air, the water and even the soul. “Our ancient heritage was the vans (forests and jungles) which would provide a lot. Gurukuls were situated in vans, people would go and stay in vans to atone for their acts or learn afresh (van vaas) etc. Our ancestors were learned and wise because they were close to nature. In the cities of today, we have the ‘kutta lao, gai bhagao’ (keep dogs, banish cows) culture. Our mahanagars are like andher nagaris ruled over by chaupat rajahs (dark cities ruled by shallow or undeserving kings). In the name of vikas (development), we are bringing in vinash (destruction or ruin),” he lamented.