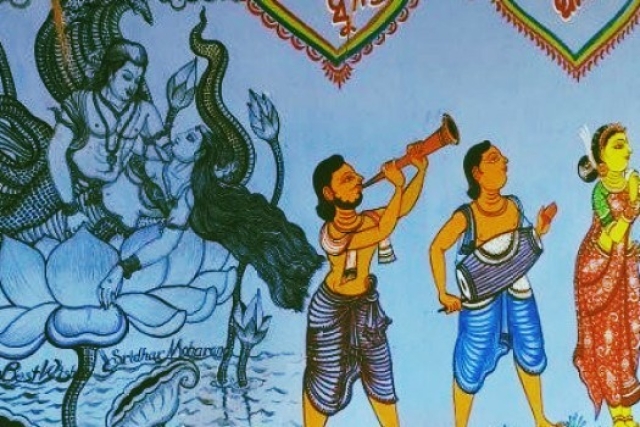 The wall of a house in Raghurajpur is painted in style

Few villages in India can boast of a legacy like that of Raghurajpur in Odisha. Lying about 60 kilometres south of Bhubaneshwar, Raghurajpur has to its credit a ‘heritage village’ tag. But that is not the reason behind its uniqueness. It is a happy village, where the sound of laughter augments the silent strokes of brushes on canvas; where smiling faces of artistes are a reflection of their amazing craftsmanship on display; and a guru-shishya parampara is thoroughly alive, touching the soul of resident and visitor alike.

There is also a sense of orderliness about Raghurajpur that most other villages cannot boast of. And it’s not just physical orderliness, although a row of temples dedicated to various gods and goddesses passes neatly through the centre of the village with houses lined up symmetrically on both sides, making it architecturally distinctive. There is also a discipline in the lives of the 140-odd families - all of them artistes - that sets them apart. The discipline that comes from piety, from respecting and adhering to time-tested traditions, from being diligent and honest and, above all, being deeply dharmic, is unmistakable.

But Raghurajpur was not always like this. Till around 10 years ago, it was a nondescript habitat populated by artistes struggling to make ends meet, dependent on extortionist middlemen who would pay them a pittance for their pattachitras (traditional Odiya paintings), palm leaf etchings, masks and other precious handmade artefacts. Yes, Raghurajpur was where the famous Odissi exponent Kelucharan Mohapatra lived, and was also the karmabhoomi of other stalwarts like famous pattachitra artist Jagannath Mahapatra and gotipua dance exponent Padmashree Maguni Charan Das. But it was full of filth and squalor, stricken by disease and poverty.

It was at the turn of the present century that things started looking up for Raghurajpur and its immensely talented people. The Indian National Trust for Art and Cultural Heritage (INTACH) started developing and beautifying the village, converted it into a ‘heritage village’, and commissioned some infrastructure projects as well. The state government pitched in after a few years by sanctioning a project to construct concrete roads and beautifying Raghurajpur. In 2012, another major project under which artistes’ dwellings were improved and the entire village was electrified, was implemented. Toilets were built and now, the entire village is open defecation free (ODF). The project is still under way.

But the major change came about, say residents of Raghurajpur, when it was made a ‘digital village’ three years ago. That changed the lives of the artistes forever. The public sector Bank of India was designated the lead bank tasked with the mission to introduce digital banking. Before that, Raghurajpur was linked to the National Optic Fibre Network (NOFN) and got high-speed broadband internet connectivity. “This has changed our lives. We can now get in touch with our clients directly and they also place orders with us directly. We don’t need the middlemen anymore. In fact, most of them have gone out of business. Earlier, they (the middlemen) used to give us a pittance for our works, which they sold at high prices. Thanks to internet connectivity, the world has now come to our doorsteps,” said Sudam Chandra Sahoo, 55. Sahoo is an artist who paints on canvas, wood, paper, tussar silk and other media and has won many awards.

Narayan Mahapatra, 38, says many handicraft showrooms and clients from even foreign countries get in touch with him directly through email. “I have scanned a few of my pattachitras as samples and sent it to potential customers who want to see my work. They place orders online and also make the payments digitally. Till three years ago, none of this would have been possible. My earnings have more than doubled, thanks to digital banking. Even visitors who come down to Raghurajpur and buy paintings and other items off the shelves prefer to pay digitally. That’s why I have Paytm and also accept debit and credit cards,” says Narayan, whose Ganeshas are much sought after.

National award winner Gangadhar Nayak, who runs a gurukul where he teaches painting, and Odissi and Gotipua dances, says that digital connectivity has brought the world to Raghurajpur and also made the heritage village famous. “Raghurajpur’s fame spread throughout the world thanks to the internet. And with fame has also come more opportunities. The projects initiated by the government have improved our lives and the construction of toilets has made a lot of difference, especially for our womenfolk. Other welfare schemes such as gas connections and mudra loans have benefitted us all,” said Nayak.

A lot of the credit for all this goes to local Lok Sabha MP Pinaki Mishra who has ploughed in a lot of money from his MP Local Area Development (MPLAD) funds for the improvement of Raghurajpur. “Our MP takes active interest in the development of our village. It is through his initiatives that projects for construction of toilets, beautification of the village, construction of roads and construction of amenities have happened,” said Gangadhar’s elder son Sridhar, who specialises in palm leaf etchings and engravings. He also says that high-speed broadband connectivity has changed the lives of the people here. “Accessing and placing orders for our creations is just a click away for the rest of the world. And the best thing is that we don’t have to depend on middlemen any longer,” he added.

Pramod Kumar Das, 48, was earlier a goldsmith. But once the transformation of Raghurajpur began, he switched to painting and, since then, has made a name for himself. He attended training programmes funded by the government. “The training helped a lot and so did the dawn of internet connectivity. I have a set of permanent customers who source my paintings and sell them. Thanks to the internet, I get a good price too,” he says. Sridhar Maharaja, son-in-law of the legendary Jagannath Mohapatra, runs a pattachitra painting school to keep his father-in-law’s legacy alive. “I have been painting since I was 15. Now, thanks to our work gaining global recognition due to internet, we get a larger number and more high-value orders from customers. Even the paintings of my students fetch very good prices, something that could never have been dreamt of earlier,” says Sridhar.

Others like Prabhakar Maharana and Akshaya Kumar Bariki say their sons are now following in their footsteps since pattachitra and traditional crafts such as making masks and papier mache toys fetch good money. “We didn’t have a choice and so followed our father's footsteps. But my son is educated and could have got a job or started some small business. But he is an accomplished pattachitra artist and earns more than what he would have had he got a job or done something else,” said Prabhakar Maharana. Purna Chandra Mahapatra’s son, Raj, has also opted to become a mask-maker like his father. “I love painting and making masks and want to keep this family tradition alive. More so, since it is now very lucrative, we have started getting our due attention from the world,” says Raj.

But fortunately, modernisation and the advent of a digital economy have not moved Raghurajpur away from its traditional moorings. If anything, the artistes here have become more rooted in their culture, tradition and dharma. It is heartening to see even young children reciting Sanskrit shlokas with ease and youngsters taking the lead in the daily pujas and other rituals at the temples in the village. “It is our culture and our dharma that has brought us fame and prosperity. So, while we have become adept in online transactions, we are also very conversant with our age-old rituals,” said Raj.

Raghurajpur, its neat houses with their outer walls lovingly painted in traditional motifs, its gurukuls with students learning at the feet of the masters, its temples from where the chants of shlokas and the ringing of bells reverberate through the village, and its disciplined and talented folks engaged in, as they say, Bhagwan Jagannath’s work, stands as a shining example of a perfect and happy blend of modernity and tradition.