How A Group Of Volunteers Are Reclaiming Indic Heritage, One Temple At A Time 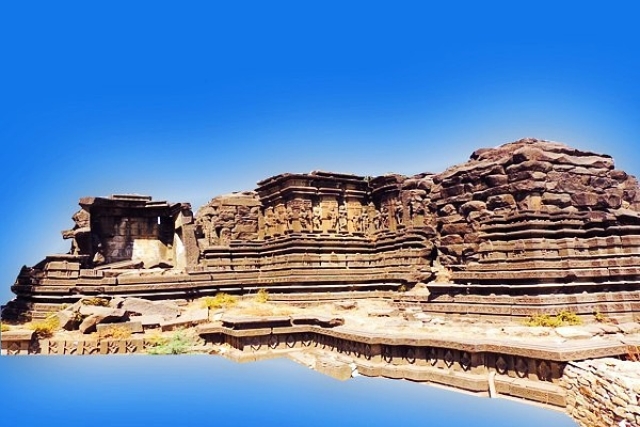 An ancient temple in Karnataka.

The disturbing images of fallen ancient Indian temples have been flooding the social media space for quite some time now under numerous hashtags. And the people, who could not bear the sight of these vandalised structures scattered around as debris, have taken it upon themselves to resurrect them to their former glory.

An initiative launched through tweets, hashtags and social media posts has now snowballed into a movement in Karnataka that aims to undo the damage done to these temples that were not only religious centres but also melting pots of culture, art and education.

Spearheaded by activist Girish Bharadwaja, the movement aims to bring together people to not just deplore the deteriorating state of these relics or talk about their horrific past, but to get their hands dirty and “reclaim temples” that have endured this distressing treatment over the past decades and, in some cases, centuries.

The task is monumental as the temples lie in shambles all over the country with many villages and towns playing host to at least 30 to 40 such dilapidated structures, which are seen as a canvas of history, heritage, mythology and much more.

“Having seen hundreds of posts about ruined and uncared-for temples, I wondered, if I could use the 15,000-odd followers on Twitter to do something about it. Which is why, I took to social media and appealed to locals around these temples, the first one we chose was in Kashipura in Hassan, to join hands to reclaim our temples,” said Bharadwaja, who initiated this effort.

Bharadwaja, through his Bharata Punarutthana Trust, set the ball rolling and it has now turned into a movement, where hundreds of young volunteers support the effort physically, legally and financially.

The trust is leading the campaign to motivate people to embark on this mission to reclaim and revive all these temples. They keep the authorities concerned informed about their actions, be it the Archaeological Survey of India (ASI) or Karnataka government's Department of Archaeology. They also ensure that no untoward incidents take place in the process of ‘reclaiming’ the temples.

But the focus, they say, is to get the people to not just do it as a one-off effort but ensure that these temples are turned into a part of the village ecosystem like they were in the days that they were originally built.

Bharadwaja's post on social media asking people to look for and report any temple ruins led a youngster from Kalaburgi, Sachin Halkeri, to start searching for such sites, probing virtually, scanning history books and pursuing similar activities. Kalaburgi is home to many temples that were destroyed during the reign of the Delhi sultanate. And Halkeri, who spends his birthday every year doing something for the society, starting the temple cleanup activities at Kalaburgi this year. The Sunday of 26 November was thus spent by a group of youngsters cleaning the Chinchansu Maheshwara Devalaya in Kalaburgi, and the transformation was immense.

The effort has now led them to devote second and fourth Sundays of every month for the temple cleaning activity. The second Sunday of December had the team heading to Ramalingeshwara temple in Hodala village. The place that had been turned into a dingy den, where people played cards and the like, has now been restored to the sanctity it deserved.

“This is a temple that has 12 Jyotirlingas in one place, half of which have been destroyed, sadly. There is no one to provide for the priest. Having cleaned the temple, we are now looking at what it will take for those to be reinstalled and rituals restarted,” said Halkeri. “The people have also been supporting us as they repent having neglected their heritage for all these years. They have assured us that they would take care of the temple from now on,” he added.

This is one thing that has been a leitmotif in all the efforts that are being made to revive the temples. Locals who, owing to ignorance, lack of awareness, concerted effort or guidance and support, had neglected these heritage structures now pledge their support to these groups of people and join hands to not just clean or sanitise them but also pitch in to get rituals and daily activities going again. “Having seen our efforts, we now get calls from locals, who spot such structures, asking us to come and help them reclaim. This is very reassuring and will ensure that the temples will henceforth be tended to,” said Halkeri.

The last one of their efforts in Kalaburgi was on the fourth Sunday of this month (December 2017) at the Rummanagudu Neelakanteshwara temple, which was destroyed completely during an attack on the village in the past.

“It feels sad and shameful to say this but the external premises of the temple had been turned into a bayalu shouchalaya (toilet), even though the carvings that are found here, like the Dashavatara (10 incarnations of Vishnu) and the Ashtadikpaalakas, are ones you will not find in any other temple in north Karnataka,” laments Halkeri. “But not anymore. The cleanup has ensured that this doesn’t happen again. This was a temple that had the patronage of the Chalukyas and other kingdoms for four to five centuries, from the tenth to the fourteenth. Since then, it is now that it is being given its due place and respect.”

The effort is not just to reclaim the fallen pillars of heritage and culture but also turn them into popular spots for tourism and pilgrimage, said Halkeri. And the young volunteers aim to achieve this by encouraging local participation and conducting more promotional activities to draw people to these places. “We have written to the tourism department, the local administration and we hope they will do what is needed,” Halkeri said.

While the long Christmas weekend that went by had many taking off to exotic places on vacation, students of S Nijalingappa Medical College in Bagalkot took to restructuring the ruined anatomy of the Mahakuta temple. Around 15 students, who saw posts about the temple needing cleanup efforts, got in touch with Bharadwaja and nursed the temple back to functional health, all thanks to the hashtag #SundayforDharma.

Sanjay K M, a final-year medical student, joined the efforts after having spotted details of the Mahakuta temple put up by Bharadwaja and the Bharata Punarutthana Trust with an appeal to people around the temple to help in the cleanup. “We were around 15 of us who gathered all that was required for the cleaning process and headed to the temple. It was sad to see food, paper and the like, thrown around and the temple premises being treated like a dustbin,” said Sanjay, who along with his friends, now intends to regularly follow up and ensure their efforts do not go in vain. And they are glad that the response to their effort found not just appreciation but also encouraged fellow students, doctors and professors in their college who volunteered to join them in their future efforts.

Nothing can impede this movement, said temple cleanup volunteers, as they do not just have the people power but also legal backing. The trust follows up and prepares for any legal hassles that may stall their efforts. “We write a letter to the ASI or the archaeology department if the structure is under their jurisdiction asking them to do the needful. But if they do not respond, we file a PIL in the court and then go ahead with our activities,” said Bharadwaja.

What was just a thought, turned into hashtags #SundayforDharma #ReclaimTemples, which has now taken the form of a massive movement with people from all over the country and abroad supporting their efforts.

Institutions have also joined hands and mutually promote each other's activity in this direction. The KBSV Bharat Trust, which has been doing similar work in Kerala, where the situation is even worse, also supports the work of Punarutthana. “It is no one's territory. It is a movement and so whoever wants to join is welcome to join, and we will do all it takes to promote any effort in this direction,” said a volunteer associated with the movement.

Both Punarutthana and KBSV Bharat have dedicated phone numbers that people can call on or send images or information regarding temples that need attention.

In Kerala, in most places, the temples have been razed to the ground and the sites have only the foundation of the structures left. The KBSV Bharat Trust activities to #reclaimtemples involve not just cleaning the place and sensitising the people but also having to create temporary structures and work for a complete re-installment of permanent ones.

The portal Reclaim Temples features all the work undertaken in this direction by the groups. It aims at systematising the collection of data on temples and will serve as a public database for temples in ruin. The information will be crowdsourced, and all the photos will be mapped to the pin code at the village level, enabling easy access.

The portal, which is also the one that started the twitter tag #reclaimtemples in 2015, was launched by a group of people, who now work under the registered KBSV Bharat Trust. “Reclaim Temples is not an organisation. It is an objective. And so, there is no single person as a leader, we are all workers in this direction. Any of the organisations may take up the activity that needs attention, but deliberately no flag or any such branding exercise has been designed for ‘Reclaim Temples’ since this is not about organisations,” said Vimal C V, who runs the website.

“#reclaimtemples is an aspiration, an objective and a movement to rebuild the destroyed Hindu temples of Bharat and reclaim the Hindu heritage that was destroyed and occupied illegally during the invasion of Bharat by foreigners,” he said.

“With over 30,000 temples lying in ruins, as per official figures, they are estimated to be around 70,000 in Karnataka, and around 200,000 across the nation, if we do not act now, at the rate at which the decay and degradation are happening, in five years’ time, they will all be lost. It is a huge effort, as even one temple a day implies decades of action,” he added.

One temple after another, the work in this direction is now gathering momentum and moving at a pace the volunteers themselves hadn’t imagined, as people from all over the country and the world have started writing in to these trusts and individuals, offering to help. On their part, they are also ensuring that they do all it takes to turn these temples into not only places of worship but also local centres of art, culture and learning by encouraging locals to put the premises of the temple to productive use. And, ask if they fear that this activism may bring them uninvited troubles, the words that echo in unison are Dharmo Rakshati Rakshitaha (Dharma protects those who protect it).