Remains Of Our Crumbling History: The Decaying Mandapams Of Kanyakumari 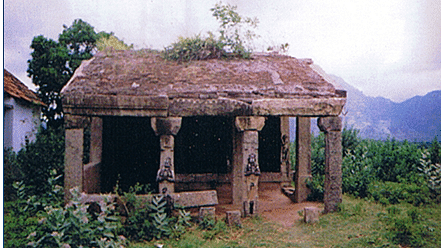 I see the ancient stone structures crumbling. These are mandapams – small structures which dot the old forgotten paths of this land. Are these paths of the old pilgrims? Lost trade routes? Or both? They were used till perhaps just two generations ago by pilgrims, traders and travellers to rest. They cooked there and slept. They sang songs. During rains, they perhaps found comfortable shelters in these mandapams. It was a silent service. Not charity, but service. Service with nothing expected in return except punya, the elusive Indic concept which has no English equivalent – and punya, usually not for oneself, but for posterity, for the community and for the state.

Today they are crumbling, and not just on their own. We are also playing a catalytic role in their disappearance. We have ceased to care. We are dismantling them stone by stone. Look at the pillars. They tell forgotten legends, local legends, and histories which the grand textbooks fashioned to the fancy of our colonial rulers would never tell us. The natives who erected these mandapams stand testimony (in the form of sculptures) to their utter neglect and destruction, with folded hands. They paid respects to those unknown wayfarers who had given them an opportunity to serve. They respected and recognised the rights of those ‘wild animals’, which were those days probably not ‘wild’ but forest dwelling creatures.

It is interesting to note that these mandapams one sees today in the Kanyakumari district owe their existence to Travancore king Karthikai Ramavarma (1724-1798) – popularly known as ‘Dharma Raja’ on account of his meritorious service to the subjects. Building such places of rest for travellers has been described in the Dharma Shastras as a deed of punya. Hence mandapams used to exist long before. But they received a great impetus after 1784 CE, when the Travancore king undertook a pilgrimage to Rameswaram. Here, he observed the chatram (choultry) tradition being revived by the Tanjore Maratha kings. This pilgrimage also made him aware of the problems people encounter during a pilgrimage, and hence encouraged the building of mandapams and renovating old ones as well.

The mandapams had some basic amenities as well, like for example, stone trough like structures, which have survived to this day. When a band of pilgrims came they used it for keeping rice gruel or other colloidal dishes. After the British domination when famines became rampant, these structures became centres of food distribution.

The reader must note that the donors or builders of various mandapams are all invariably standing in humility with folded hands and see our indifference: We decapitate them, tar and disfigure them. How is our cultural illiteracy and destructive insensitivity towards our own heritage different from the theological fanaticism of Taliban and Islamic State (IS) which destroy the pagan cultural heritage? It is tempting to argue that our destructive cultural insensitivity is derived from our Nehruvian-Marxist-Dravidianist worldview, which is similar to Taliban and IS ideology. They constitute a deep hatred for the merits of Pagan culture – of which Hinduism is the last living culture. Though we are not yet like the IS and Taliban, soon we may become like them. Here it is pertinent to add that a few years back, official and popular Tamil Marxist-Leninist website decried the attempts to preserve ancient traditional structures by an NGO, and suggested that these unproductive structures be destroyed and converted into workers’ quarters.

It was during the reign of Dharma Raja that Travancore faced the Islamist invasion of Tipu Sultan, the terrible. The forces of Travancore defeated Tipu in two decisive battles, handing him down a permanent setback. The battles made Travancore vulnerable to the aggressive manoeuvres of the British then masquerading as the East India Company. It is interesting to note that in the Travancore-Tipu battles, East India Company Governor Holland stationed at Madras tactically supported Tipu. So in the approaching hard times these mandapams should have also worked as an infrastructural network for people to improve the local mercantile activities.

The mandapams are not just places to rest. The architects who built it also embedded in it an aesthetic and spiritual element that combines the natural world and the divine world of gods and goddesses. In fact, in Indian culture these two worlds exist in perfect harmony rather than the divine dominating the natural world. For example, the stone roof of the mandapams contains invariably the fish signs.

Epigraphist S Ramachandran points out that from the very earliest epochs of Indian culture, as in Harappan civilisation, fish has been considered as a symbolising star. This, he explains, is also a part of the Vedic imagery of seeing the night sky with stars as the celestial milk ocean with their fish, a mirror image of the terrestrial ocean. Or consider the turtle depicted in the pillar sculptures of mandapams.

Ramachandran draws attention to the Nagaraja temple, and the turtle in the Puranic symbolism is the mount for the thousand-headed serpent Adisheshan. Clearly, the mandapams contain within them a code language which would speak to us about the life, culture and worldview of our ancestors, separated from us by not more than a few centuries. Yet, through our education that makes us cultural illiterates today, they make as much sense to us as Egyptian hieroglyphs make sense to an ordinary Egyptian.

Of the two roof based reliefs, one is the very familiar Gajalakshmi - Lakshmi flanked on both sides by adoring elephants. Another is a visibly pregnant woman in a squatting position with an elephant in the background. On both sides are figures with folded hands and markings in the forehead which belong to Saivaite/Vaishanvaite sects. So what does this symbolise? Of course, the Buddhist myth of Mayadevi and elephant comes to the mind. Perhaps, it may be related to a more local legend/event. However, with the mandapams being disfigured and fast disappearing we may be losing very precious data of our cultural and social history without we realising it.

Fortunately, pilgrims till criss-cross the countrysides through some ancient paths. And people, who still believe in the concepts of punya, serve them. If only the local administration and communities come together and revive the tradition of these mandapams, pilgrims can at least be served during pilgrimage seasons, which are part of the annual cycles here like the ‘Sivaratri ottam’ (a spiritual marathon on the day of Sivarathri when devotees run and visit 12 Siva temples covering an incredible 80 to 110 kilometres in one day) or pilgrims undertaking padayatra to Thiruchendur Murugan and Uvari Siva temples. Gradually they can blossom into places where the local value-added services can be provided, like the handcrafts and food. They can become centres of economic and cultural activities.

But right now except a handful of mandapams, which are ritually associated with certain temples and local customs, others like any endangered species are dying a slow and cruel death. And we shall turn it into another casual page in our shameful writing of the grand dark history of cultural illiteracy.