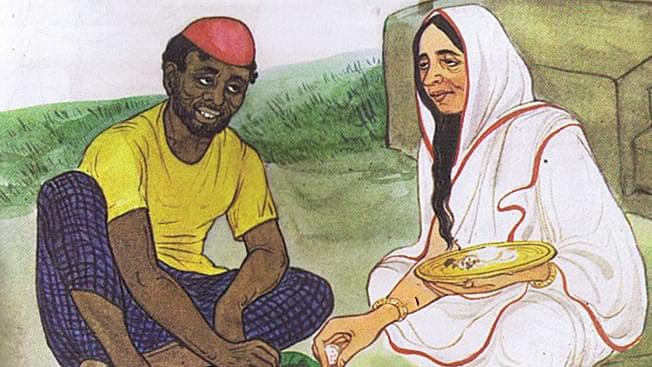 Today is the birth anniversary of Holy Mother Sarada Devi, the kind woman who truly lived the Vedanta of the Upanishads, and became a luminary for women in India as well as elsewhere.

As an almost illiterate child bride, she could have lived her life in silence. But instead, she did things that would forever transform the lives of millions of women for generations to come, and liberate them from the chains of social stagnation.

A well of compassion

Sarada Devi spent her life in a Bengali village which, under colonial government, was ravaged by famines. Usually, the scheduled tribes who fiercely fought the British were the first to feel its impact. During one of these famines in 1864, her father, who was himself a poor man, had opened a free kitchen and fed the affected victims. She was then a little girl, and would serve the poor with her own hands and fan them while they ate.

When a tribal girl, devastated by hunger, came nearby and started eating the cattle feed, little Sarada took her inside the kitchen and fed her with her hands. She would later tell people the importance of food security and the importance of feeding the hungry.

“It is no joke to bear the agony of an empty stomach,” she said.

When her husband, the famed Ramakrishna Paramahamsa, was alive, he had taken a vow of not touching money. When a rich merchant visited Ramakrishna and offered him a generous amount, the latter refused.

However, that vow would not bind his wife. So the merchant called her and asked if she would accept the money. She sternly refused. If she took the money, technically, he would not be breaking the vow; but ethically, the vow would be broken. So, “No”, she said to her husband.

This remains a great action to this day, and should guide people in public life who often use their wives, children and relatives to legally cover their wealth.

On losing her husband, Sarada Devi had to take off her bangles as is customary. However, she did not. She wore them all her life because, to her, death was not the dissolution of the Self itself. She was no overt revolutionary, but in those days of social stagnation, this act infused confidence in the women of India.

Her picture today finds a home in many Hindu houses. One can see her in the picture, majestic, sitting cross-legged like a Yogini with her free-flowing hair and her hands covered in bangles.

Standing for the cause

When her spiritual son became a world-renowned figure, people from the the West accompanied him. At that time, orthodox Indians considered Westerners as polluting, and would not allow them in their households; this was despite the fact that these people served the British government. But, she took a significant step in opposing this move. She not only met Margaret Noble but also inaugurated the school for girls Noble opened on 12 November 1899.

Again, a silent revolution in hindsight: a white woman starts a school for girls’ education in colonial India and a 'widow' inaugurates it. And all this happened as if it were the most natural thing to happen, without any significant resistance or outrage from the usual suspects.

Ma Sarada poured to the world a love as divine as that of the Universal Mother who could never show any discrimination towards any section of humanity. When she was old and living in her village Jayrambati, a man called Amjad came to her. A well-known thief in the area, he belonged to the Muslim community, who then were silk weavers. Colonial rule destroyed their livelihood, and many of them indulged in robbery. Amjad had also been arrested for robbery and released.

When the local people refused to serve Amjad, Holy Mother defiantly said that for her, 'Amjad was as much her child as Sarat' (Swami Saradananda was one of the beloved disciples of Sri Ramakrishna.) Then, she proceeded to serve him food with her hands. For the mother, a hungry child cannot be barred by any social division.

Let us offer our respect today to kind Ma Sarada, who espoused the true ideals of benevolence, kindness and, most importantly, motherhood.