Remembering Sri Aurobindo And The Vision Of A Life Divine 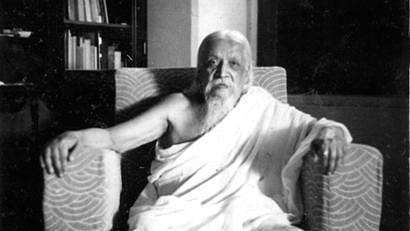 Sri Aurobindo famously said, “We do not belong to the past dawns, but to the noons of the future”. The ninetieth siddhi day (day of attainment) of Sri Aurobindo, which falls on 24 November this year, is a good time to look at the contemporary relevance of the philosophy and vision of this largely forgotten luminary.  Sri Aurobindo has been described variously as a revolutionary, a classical scholar, a poet, a literary critic, a philosopher and a yogi. He was all this and more. His life and work can be broadly looked at as two phases: first as a “prophet of nationalism” who brought a new fervour and an element of the sacred to the freedom struggle and later, as a modern rishi who, through an experiential synthesis of Indic spiritual traditions, gave a vision for a cultural and spiritual renaissance in India and to further the evolution of human consciousness.

For a man who would become a leading voice of Indian thought, Sri Aurobindo’s formative years were spent in England, completely bereft of Indian influences, learning Greek, Latin, French, German, Italian and Spanish along with the Classics, Literature, European History and Geography. At Kings College, Cambridge, he distinguished himself by passing First Class in his Tripos and obtaining record scores in the Indian Civil Service examination, which his father compelled him to write.

However, on understanding the atrocities of British Rule, he firmly dedicated himself to India’s liberation. Aurobindo deliberately skipped the horse riding test and the examiners were happy to disqualify him, having suspected his revolutionary leanings. Three decades later, Subhas Chandra Bose quit the ICS, writing, "The illustrious example of Aurobindo Ghosh looms large before my vision.”

A chance meeting led to employment with the Baroda State, where he served for 13 years, notably as the vice-principal of Baroda College. These were years of immersion into Indian thought through an intense study of Sanskrit, Hindi, Marathi, Gujarati and Bengali and Indian works. His political writing, which began in 1893, espoused a vision for a radical mass movement for freedom. The nation was a divine ideal and the struggle for her freedom, a yagna to be undertaken, for without freedom, social and educational reform was meaningless. To infuse adoration of this sacred nation and mould men for her liberation, Aurobindo started Anushilan Samithi in 1902, which spread like wildfire across Bengal with hundreds of such groups being set up. His intense love of India made him take up yoga, seeking not mukti, but the “strength to uplift this nation”. This did not go unnoticed. B A Clark, the principal of Baroda College said of him:” Did you notice his eyes? There is a mystic fire and light in them. They penetrate into the beyond.”

A founding member of the Nationalist Party, he was the first to give a comprehensive vision for Poorna Swaraj through complete non-cooperation and the creation of a parallel state with swadeshi production, a national education system, local arbitration courts and a dedicated “volunteer corps”.  Aurobindo led the efforts to begin schools and colleges for imparting education “on national lines and under national control”, becoming the founder-principal of the Bengal National College, where he inspired students to “study for her (India’s) sake. Train yourselves body and mind and soul for her service… Work that she may prosper. Suffer that she may rejoice. All is contained in that one single advice.”

Under his editorship, Bande Mataram became the voice of the independence movement across the country, ”reeking of sedition” as the Statesman described it,  with extracts being reproduced even in the Times in London. When the government filed sedition cases, Aurobindo courted arrest refusing to recognise the legitimacy of the British Rule. This pushed Aurobindo, who had till then worked behind the scenes, into public prominence as one of the tallest leaders of the freedom struggle. His mystical aura and daring exploits would inspire an entire generation of revolutionaries.

The Deepening Of Yoga

In parallel, his pursuit of yoga continually deepened, providing vitality and impetus to his national work. A letter to his wife in 1905 gives a glimpse of his mind where he speaks about “three madnesses in his life”, the first being his faith that his talent and knowledge belonged to god and had to be used for the welfare of others, the second being the desire for a direct experience of the divine. His third madness was knowing and worshipping his country as “the Mother” and fighting to free her not with the gun but with "the power of knowledge”. Under the guidance of a Maharashtrian yogi, he achieved a “completely still mind”. From then on, everything he spoke and wrote came from that Consciousness.

In 1908, Sri Aurobindo was arrested and imprisoned as a suspect in the Alipore Bomb Case, the first major state trial in India. In a case that lasted for over a year, Chittaranjan Das successfully defended Aurobindo, ending his defence saying Aurobindo “will be looked upon as the poet of patriotism, as the prophet of nationalism and the lover of humanity”. This year of confinement was a watershed moment in Sri Aurobindo’s life, which he spoke of in his momentous Uttarpara Speech. It was a year of intense Tapasya where he had a vision of Krishna and understood the future nature of his work.  He was convinced that freedom was certain and that India must find inspiration in her spiritual past to achieve greatness, not only for herself but to serve and offer light to all humanity. For a year after his release, he tried to rejuvenate the struggle, but realised that time had not come and “he himself was not their destined leader”. His active political life had ended. The magnitude of the spiritual work entrusted to him would occupy his entire energy.

The Vision Of A Life Divine

The next phase of Sri Aurobindo’s life began on moving to Pondicherry, “his cave of Tapasya”. What followed was four decades of silent, intense yoga. In 1914, Mirra (The Mother), who later become his spiritual collaborator, met Sri Aurobindo. Immediately, the monthly Arya was started, in which a vast torrent flowed from Sri Aurobindo’s pen for the next seven years. Most of his major works on divinising life, the pursuit of yoga, the significance of Indian culture, the import of the Vedas etc were serially published in the Arya. This was possible only because “all that had to be written came down, all ready, and he had only to move his fingers on the typewriter and it was transcribed.”

He wrote for those, “who acknowledge reason, but do not identify reason with western materialism; who are skeptics, but not unbelievers; who, admitting the claims of modern thought, still believe in India, her mission, her gospel, her immortal life and her eternal rebirth.”

A powerful motivation in his writing was discovering the vast spiritual troves of the past through the light of inner experience, recasting them into contemporary forms and expressions to divinise every aspect of life and solving problems in the “light of the Indian Spirit” to raise India and serve the world. His work encompassed all three dimensions.

When Sri Aurobindo first glanced at the Rig Veda, he found it reflected his deepest spiritual experiences. Thus began a deep, independent and meticulous study of the Rig Veda, serially published as The Secret of the Veda, using his inner experience to illumine otherwise obscure passages.  His integral yoga aimed not only at an ascent into a higher consciousness, away from the world but sought a descent of that consciousness into matter, to sacralise every aspect of existence. This vast vision found expression in The Savitri, of 12 books and 28,000 lines, the mantra kavya of this great rishi written over four decades. True to the kavya tradition, it embraced everything - mysticism, philosophy, politics, nature of man, the creation of the universe and the destiny of man.

On 24 November, 1926, Sri Aurobindo attained siddhi, which he described as the descent of Krishna.  After this, until his death in 1950, he retired into solitude, corresponding with disciples through thousands of letters and giving darshan thrice a year. When India gained Independence on 15 August 1947, also his birthday, Sri Aurobindo spoke of his five dreams for the nation – a united India, the resurgence of Asia, unification of the world, the spiritual gift of India to the world, and evolution through raising human consciousness. Sri Aurobindo left his body on 5 December 1950. For a man who lived in seclusion, lakhs came to pay their respects. His work was carried on by The Mother.

Tagore met Sri Aurobindo twice. First in 1907, at the height of Sri Aurobindo patriotic fervour, addressing him as "O friend, my country’s friend, O Voice incarnate, free, Of India’s soul!" Tagore met him again in 1928, a rishi at his ashram, and read the same salutation. This time, he added, "India will speak through your voice to the world". Both these dimensions of Sri Aurobindo are relevant today, his elevation of the national and political to the realm of the sacred, where the rise of India is not to dominate but to share her light with the world and his voice, which encompasses at once the cultural and spiritual, the past and the future, the individual, India and humanity in one grand unified vision.

Shyam Krishnakumar is a research associate at Vision India Foundation, New Delhi and a member of Anaadi Foundation, Coimbatore. His areas of interest include Indian culture, spiritual traditions and the Indian Grand Narrative.