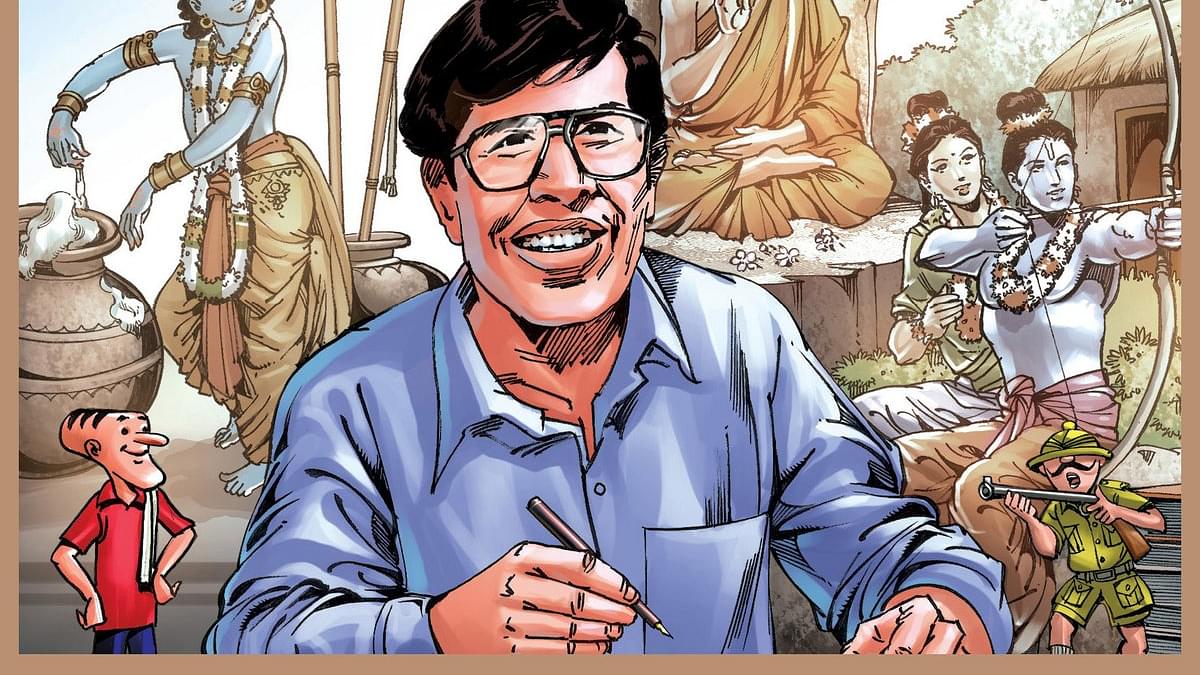 We do not get taught about our own giants. We actually discover them only accidentally. It is a real pity. The reason is not far to seek. For decades, the standard narrative and content for the history of India was set by Marxist historians.

It was a linear narrative – the kind of narrative where events flatly anticipate the emergence of Congress as the people’s movement and the crowning of Nehru-headed Congress government as the ultimate achievement of Indian history. Anything that did not fit into this narrative was left out – however crucial it may be to the regional pride of a people and however important the phenomenon may be as a mighty contributor to the evolutionary matrix of Indian civilization.

Discovery of India set the tone for the historiography of India. Delhi-centric rendering of Indian history and Euro-centric evaluation of Indian culture form the two axiomatic pillars of Nehruvian history. Marxist historians, who systematically captured the educational institutions, promoted this historiography with glee because it served their own vested interest.

Has there been an alternate system that has brought out our Indic pluralistic heritage for our children to read and enjoy?

Yes! One man has thought about it all decades before.

Using comics as his medium, Uncle Pai brought mythology, brave hearts, epics, folktales, literary masterpieces, biographies of visionaries from every region of India to our children.

Consider some of the themes and personalities he covered in his comics: Bhaga Jatin of Bengal who fought the British knowing very well how the battle would end, Yellapragada Subbarao, the scientist from Andhra Pradesh, who discovered wonder drugs to alleviate pain and suffering, Sri Narayana Guru of Kerala heralding a socio-spiritual revolution, the myth of Jagannath of Puri which harmonizes the tribal and non-tribal elements, the different local versions about the sons of Pandavas, the supreme sacrifices of the Sikh Gurus, heart-rendering story of Angulimala - the mass-murderer turned saint, who calmly accepted his own stoning to death!

One wonders if there has been any other comic house in the world that has achieved such variety in content and more importantly such meticulous research in the issues it brought out.

Amar Chitra Katha is essentially a unique Indian phenomenon of child literature. It is both an experiment and an achievement. It is one of the few things an Indian can be legitimately proud of in modern India.

So, how did the left academia react to Uncle Pai?

They were quick to hurl abuses and branded Amar Chitra Katha (ACK) as a series portraying ‘Brahminical’ values, presenting only the ‘dominant narrative’, etc. Almost all ‘academic’ analysis of ACK is in a negative lingo. Here is a typical academic ‘perspective’ from a Hyderabad University researcher:

Nationalist discourse automatically excluded under the sign of Indian non-Aryan and lower class ‘lower’-caste people and cultures. In the case of the freedom struggle, for instance, the role of the ‘lower’ castes gets assimilated into that of the urban, middle-class upper-caste, Hindu role. Dayananda’s efforts at assimilating ‘untouchables’ into Hinduism - specifically Brahminism, he is shown distributing the ‘sacred thread’ – are highlighted. Only one panel is allotted to showing Brahminical oppression of ‘lower’ castes while the assimilation of these castes into mainstream Hinduism -there is no discussion of tribal/Dalit lifestyles at all, gets four.

How factually hollow and vicious in its content this attack is, can be gauged if we bring together the different issues of ACK.

In the case of ‘Dayananda’ (Vol. 624) there is not ‘one panel allotted to showing Brahminical oppression of ‘lower’ castes but three (page 13) and the plight of the poor is shown in the next page in three panels.

At page 20, of which it is has been alleged that the ‘assimilation of these castes into mainstream Hinduism’ gets four panels, we also find three panels depicting the Hindu orthodoxy’s violent opposition to Swami Dayananda’s social reform measures.

Prior to Dayananda, ‘Baba Saheb Ambedkar’ (Vol. 611) had been published by ACK. Here, Dr. Ambedkar has been shown as both the nation-builder as well as the champion of the rights of the oppressed. ACK does not mince words when depicting Dr. Ambedkar’s sharp attacks on Smriti-based Hinduism.

Similarly, the ACK issue on Basaveshwara (1980) also depicts the tyranny of the upper classes on the Dalit communities in various panels. Once again, the title ‘Narayana Guru’ (Vol. 792) has its first four pages with twenty one panels depicting the notorious ‘lunatic asylum’ condition of Kerala under the stagnant casteist oppression.

Even more bizarre and blatant falsehoods are stated by leftist academics. These are then re-quoted without verification - just to portray ACK negatively. The same scholar states:

Further as Srilata points out, in the attempt to construct a pan Indian woman, ‘the clothes of a local heroine from the south, say Kannagi, is very often like those of the clothes of the heroines from the North, like Padmini of Chittoor’.

One just has to look at the covers of ACK of the issues Kannagi (Vol. 666) and Padmini (Vol. 605) to know the utter falsehood of this statement. The Nehruvian establishment and its evolutes have not only been produced and profited by cultural illiteracy in India but also venomously attack any attempt to remove such cultural illiteracy.

But thankfully for us a market-oriented, uniquely Indic attempt by ‘Uncle Pai’ has made it easy for Indian children to understand India’s greatness..

Taking Indian history to every child needs further dedication. Translation into regional languages, subsidizing the cost for accessibility to all economic strata (in 1980s one issue was Rs 3.00 and today it is Rs 50.00) are just some of the gigantic tasks awaiting the new Bhagirathas who want to take this Ganga of Indic heritage to the next generation.