‘Satyam Shodham Nirbhayam’ — Chidananda Murthy, A Lifetime Of The Fearless Pursuit Of Truth 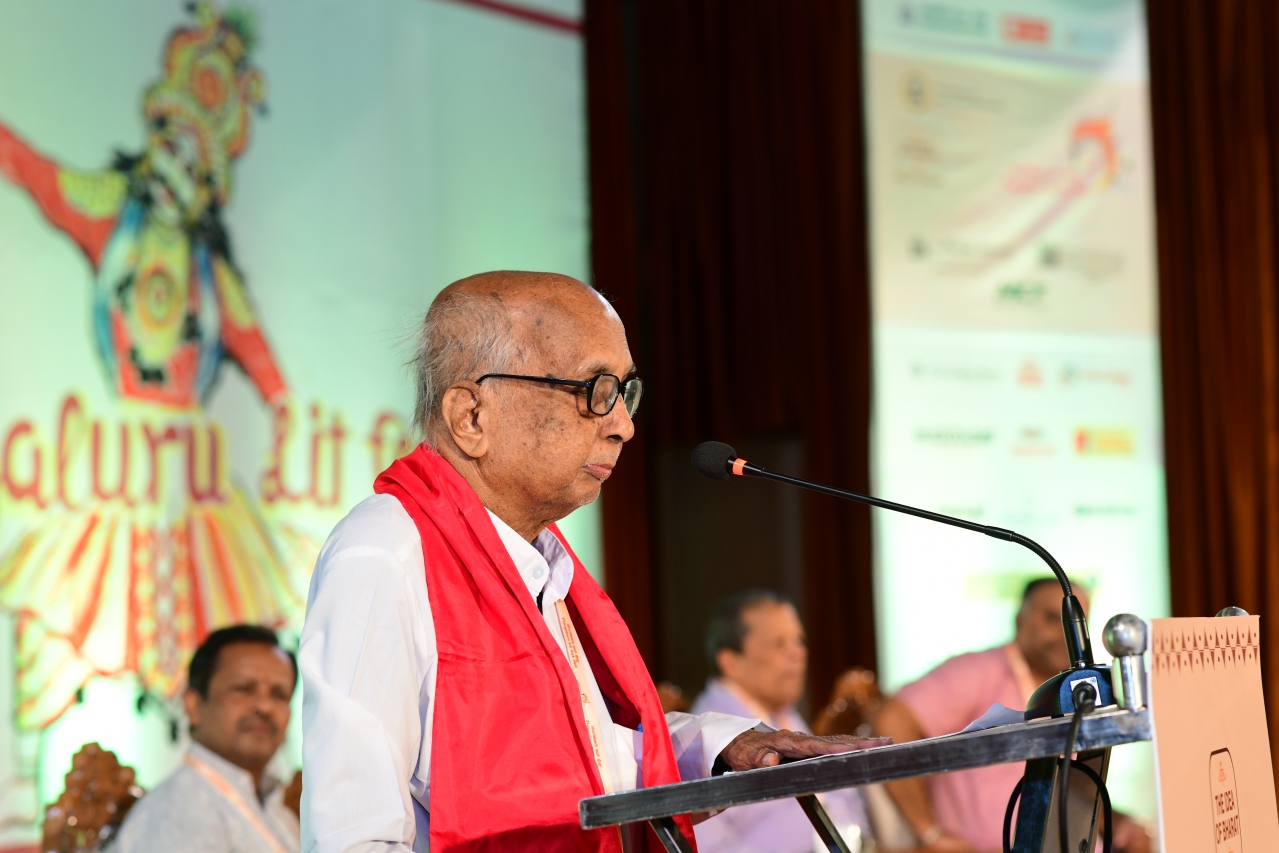 This body is momentary, but truth is forever!

These words of this frail octogenarian holding a collection of his essays that was launched that day at the Mangaluru Lit Fest haunt me today as I hear of his demise.

The sight of those skeletal hands holding that voluminous book will stay etched in my mind forever.

For, these were the hands that had penned an avalanche of thoughts and fought many a mighty battle with his pen alone.

If Kannada today has a classical language status; if the state language has a separate Kannada University at Hampi today; if the monuments at the site of the greatest Vijayanagara empire stand protected today, we Kannadigas have this one man to be indebted to forever.

A popular anecdote about the journey of this ‘Kannada Garuda’ is how he pledged to give his all to get the language its due recognition.

In the early ‘80s, a small petite Kannada professor, Murthy, stood outside a film theatre and asked for four tickets in Kannada. But the person at the counter is said to have insisted he speak in English and the tiff that followed over the use of Kannada, the apathy of the bystanders, the pitiable state of language pride in its own state, hurt Murthy so bad, that he pledged to devote his life to get Kannada its place of pride and recognition.

Which, he unfailingly did for the next almost four decades of his life.

As he undertook a journey by foot from Bengaluru to Hampi in 1985, he is said to have mused about a separate university for Kannada and worked towards it.

He then championed the effort, brought thinkers, leaders, and academicians to back it and finally ensured the idea saw the light of day.

He also led the movement to ensure Kannada got classical language status (2008). Enlisting his works would make for a whole article by itself. His doctoral thesis titled ‘The Cultural Study of Kannada Inscriptions’ has been hailed as a ‘cultural encyclopedia’ and is a landmark work in understanding the socio-cultural context and importance of these etchings in stone. 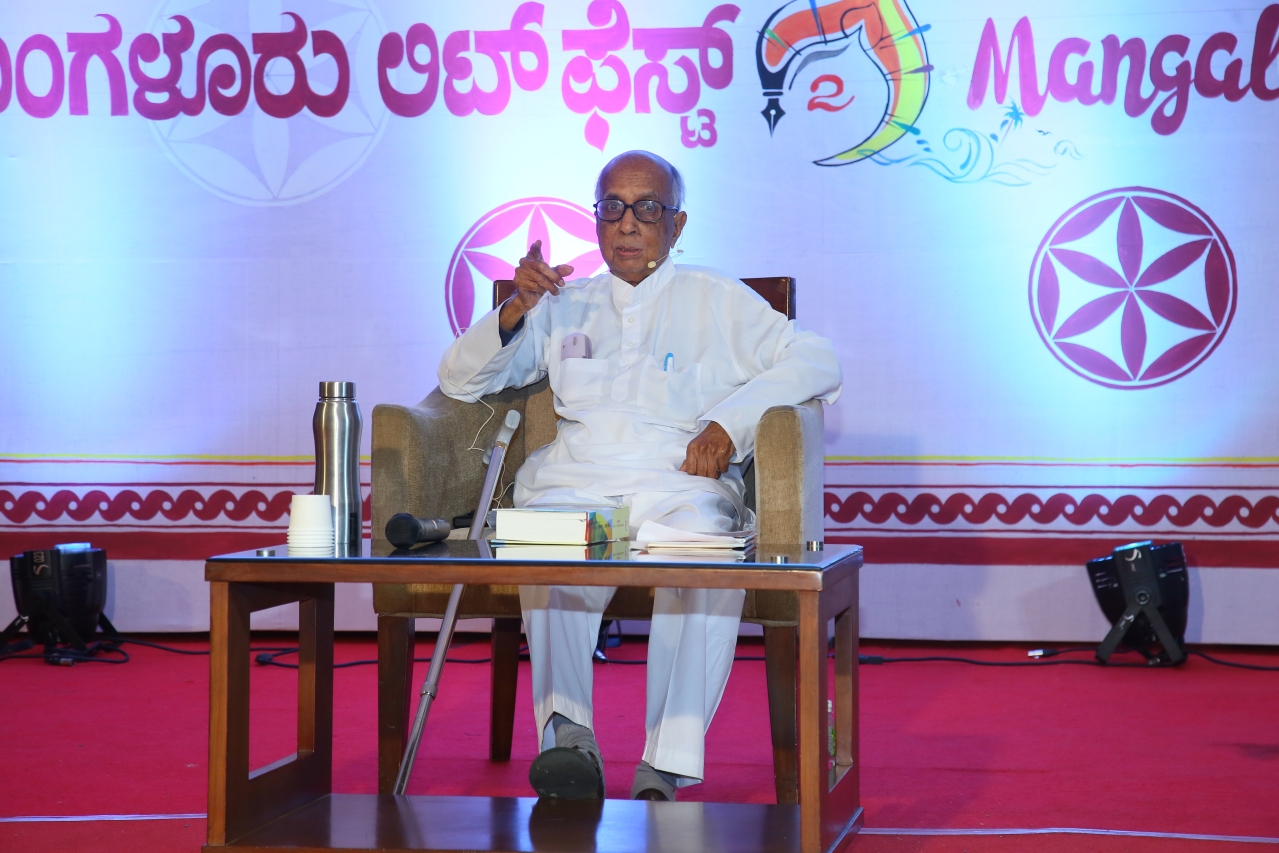 “It doesn’t matter if your name remains or not, but the work you do with truth will remain forever. And for that, it is important you do it fearlessly,” said Murthy at a session at the Litfest, as an audience member asked him if it was possible to really be a warrior of truth.

He led the Gokak Chaluvali for Kannada from the front, established the ‘Kannada Shakti Kendra’ , was vociferously against the celebration of Tipu Jayanti in the state, lent his support for the need for a Uniform Civil Code, and was absolutely unapologetic about his pride for his land, language and culture.

‘Satyam Shodham Nirbhayam’ the title of his collection of essays that was launched that day, sums up the life of this legend whose words that day re-initiated me onto this path of Dharma.

For, here was a man who had been all that I aspire to be.

He had chartered out on similar unknown territories, be it research, language and linguistics, heritage, truth or telling the tales that not many want told — and all this almost a lifetime ago.

And as I was twitching fingers preparing to be on that very dais in a conversation titled ‘Excavating Truth’, here was a personification of almost nine decades of an excavation of truth.

He minced no words when he called out the bluff of those who, for the sake of ‘convenience’, were willing to compromise on ‘truth’.

Flipping through the pages of the book and his lifetime, he spoke of his stand regarding the controversial issue of the separate religion status for Lingayats and the politicised portrayal of a separation between Veerashaivas and Lingayats.

“Lingayats or Veerashaivas are Hindus. But those seeking a separate status are those who value convenience over truth, which is absolutely in contradiction to what Basavanna himself preached as he said ‘Husiya Nudiyalu Beda’,” Murthy believed.

His childlike innocence that shone in his eyes as he narrated a few anecdotes from his early days in Mysuru were proof that it was possible to stay ‘untouched’.

But equally or rather even more and strongly inspiring was his candid inquisitiveness and the desire to ‘know’.

At 88, wielding that walking stick, which was only slightly thinner than his wrists, he was looking forward to discovering something new.

In times where rehashing the convenient pasts is more of a norm than a trend, this man was gleefully saying that he was but a researcher — samshodhaka hosadannu enaadru gurthisbeku ennuva bhaavaneyavanu nanu’ (I am someone who wants to identify something new all the time).

“I have heard there are four villages near Kasaragod whose names are Swarga, Marthya Naraka, Patala. I am looking forward to confirm the same tomorrow. If any of you do know, do enlighten me about the same,” he asked.

Yes, he was at the LitFest, and being honoured with the Lifetime Achievement Award. He was addressing the audience on important issues. But this visit could not be complete without ‘finding out something new’ and that is what the youth of today should also look forward to, he advised. Chidananda Murthy being honoured with the Lifetime Achievement Award at the Mangalore Lit Fest.

“Is there something new I can add? Can my contribution add to the growth of knowledge?” Only if you think on these lines, can you grow. For instance, if you seek to be a poet, look to exploring newer ways of writing poetry,” he said, as he remembered Bendre, Kuvempu and Manjeshwar Govinda Pai.

He emphasised on the need to be inspired and ‘to follow but not ape, imitate and emulate. His words, “anusarane maadi, anukarisabaaradu ring in my ears.

So, here, as he leaves his mortal frame today, I hope we all can ‘follow’ his life and work and walk the path of Dharma as he did, led by the vision of ‘Satyam Shodham Nirbhayam’.

Get Swarajya in your inbox everyday. Subscribe here.
Tags:
385 Shares