Sehwag – The Fun Guy Of Cricket 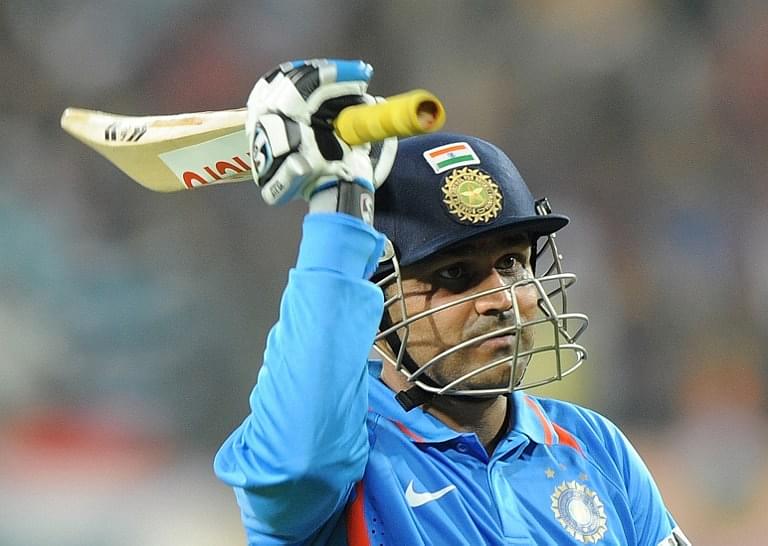 Celebrating Virender Sehwag and his method to madness

We all love cricket, and we all have played it just for the love of it because it made us happy. As kids, we all wanted to bat and as strangers to the fear of failure, wanted to hit almost every ball.

Virender Sehwag also used to do the same at the highest level of cricket for more than a decade. After tasting success at that level, if one can continue to play his sport for the reason he played it as a kid, he has to be special. Viru indeed was very special.

When Vivian Richards used to enter the ground with his bat, he used to own the stadium. On the contrary, Virender Sehwag used to disown everything. He would walk in whistling to chase a target of 325 as if entering a restaurant for his favorite dinner platter.

Sehwag on the cricket ground was always totally relaxed and stress-free like a spiritual monk. His batting wasn’t from a manual and was unlike others’. The world has wondered how he batted with such ease, in such a carefree manner. But for Viru, it was an art of living. Keep it simple, stay cool and utterly confident, smile and do what you love doing. The roadmap for a better life was right there in the middle of the ground. Play to your strength, forget your mistakes, forget your success, just don’t forget to smile. Someone rightly termed it ‘Sehwagology’.

Sehwag grew up, playing cricket wanting to play like Sachin Tendulkar. He was selected for the 1999 series against Pakistan but could score only 1 run in his debut ODI match. Later he got a chance to fill-up for his injured idol against New Zealand when he scored his first one-day hundred. He could have been mistaken for the little master, there was the same back-foot slash towards cover, the thunderous straight drive punch and the wristy glance to the leg. On his Test debut on a fiery pitch of Goodyear Park, South Africa, he matched the master stroke for stroke as they both scored centuries. But soon he emerged his own man.

His success at the top of the order in ODIs had enthused Captain Sourav Ganguly into promoting Viru, a middle-order batsman in Test cricket, as an opener. In the second Test at Trent Bridge in 2002, Sehwag, in his handsome and restrained innings showed his ability to score runs as an opener. The wisdom and belief of Sourav had revealed what India stood to gain from the move. Sehwag opening the innings in Test matches was Dada’s gift to cricket.

Viru’s batting prowess was built on his ability powered by his attitude. He had the balance and hand-eye co-ordination that would have made the best of batsmen jealous. Viru also had an uncluttered mind, a rare virtue that allowed him never to get affected by the reputation of the opposition or the bowler.

A flick over the leg side and the ball would go over the rope. Around him would be a furious yet helpless opposition captain, people on the ground would be jumping, screaming, laughing. You would find Sehwag normally disinterested. All focus would be on the next ball. A flash outside off. The bat missed the ball. It didn’t matter. It was the same calm and casual look. The previous one might have been nicked through the slips, hit for four or six, or been defended, it didn’t matter. He might have started batting on 94 or 195 approaching his first double hundred. It didn’t matter. Amazingly pure human being!

A cut through point. It appeared as if it existed on his bat and at the boundary ropes at the same time. The cut could have been a drive, they all used to go to at same pace, very fast. Before Sanjay Manjrekar could react in the commentary box, you would see a faceless, frustrated bowler on the giant screen with his hands placed on his head. Steyn or Akhtar, McGrath or Murli, reputation did not matter.

It’s a misconception that the Nawab of Najafgarh did not care or was unconcerned with technique or the nuances of the game. There was a method to Viru’s batting, a comfort in his madness. He wasn’t a blind slogger and didn’t go out to the crease to smash every ball. Viru thought a lot about his game and knew what worked for him.

He consulted his teammates and understood what little changes could make a big difference.

“It doesn’t matter whether you move your feet or not, if your head is still, and body is in balance, you can score lots of runs.”

Watching Viru bat for some is an emotionally turbulent experience. His footwork was nauseating and his choice of shots, sometimes ridiculous. But precision and intent were his strength, not perfection. Viru played his cricket the way it was originally meant to be played.

He could evoke pure delight or utter anguish in a matter of a second, but it was guaranteed that there won’t be any dull moment. He was hair wrenching, jaw-dropping thrill. Viru made risk a fashion, and if you liked to gamble, Viru offered only the jackpot. He was worth all the disappointments because he made us experience the royalty too, many times. Especially on an India-Pakistan match day, he was the most feared man in the subcontinent.

Listening to Sehwag is equally entertaining. He talks like he bats, fearless, pure and from the heart. He lit up boring press conferences. There’s no pretense, no false modesty, no sugar coats, no hint of arrogance. Yet he offended countries with his press conferences and spiced up headlines with his straight talk.

“I also want to thank everyone for all the cricketing advice given to me over the years, and I apologize for not accepting most of it! I had a reason for not following it; I did it my way!”

What a fun guy!

So, which one is your favorite Sehwag knock? His first 100 off 70 balls or 201 not out against Sri Lanka when he was zooming on a Ferrari while others were playing on a minefield? Is it his 219 against West Indies, his double hundred in ODI, or is it his fastest 60 ball ODI hundred against New Zealand in Hamilton? Are you sure it is not that 319 against South Africa at Chennai or that ridiculous 293 from 254 balls in Mumbai?

It’s like asking which Kishore Kumar song is your favorite. 195 vs Australia at MCG: India had come back from behind to win a historic Test at Adelaide and go 1-0 up in the series. The Aussie fast bowlers were steaming in on the first day, cheered on by obviously by a Boxing Day crowd.

Sehwag, batting very unlike him with restraint against the new ball, started with a couple of hits on the helmet in the first hour. He had only made 16 out of first 53 balls he faced. But once set, Sehwag hit six fours and a six and reached his half-century in 78 balls and then let loose and spanked the Aussie attack to every corner of the park. India moved to a dominant position before the end of the day. After having hit a six to reach 195 from 189, Sehwag holed out trying to reach his double-hundred with another six. Sehwag was upset with himself not because he missed a double-century but because he had missed a bad delivery that was there to be hit. India eventually lost the test.

Despite the match result, this was probably the innings that made the world stand up and take notice of Virender Sehwag.

309 against Pakistan at Multan: India had not won a Test match in Pakistan, ever. India won the toss and Sehwag started his sustained cheerful assault on a flat carpeted wicket that continued for five sessions. Sehwag ended the first day on 228.

When Viru crossed 281, he waved his bat to VVS Laxman. Later, during the press conference, he said how happy he was to see Laxman standing and clapping in the dressing room. No Indian batsmen had ever made a Test triple-century before.

Sehwag replied: “I am going to hit Saqlain if he offers flight, and you could hit me on my bum!”

Of course, Viru hit the next ball for six to Saqlain Mushtaq to become the first Indian player to make a Test triple-century. It was Pakistani bowlers who first felt the full brutal force of the Sehwag tsunami. All the three fast bowlers conceded a hundred runs each. Saqlain Mushtaq had to bid adieu from Test cricket with figures of 1 for 204.

The pace of his scoring allowed India to declare with a score of 675 with ample time to bowl Pakistan out twice. India won its first Test in Pakistan by an innings and went on to claim the three-Test series 2-1.

83 against England at Chepauk: This extraordinary, super special 68 balls-83, while chasing 387, is my all time favorite.

England won most of the sessions for four days of this Test match. On the fourth day, they declared three overs after the tea break setting India a target of 387. By the time Andrew Strauss (Captain) could realize that he would have to put a defensive field, Sehwag’s brutal assault had shaved 100 runs off the target.

When he got out in the 23rd over having scored 83 and put on 117 with Gautam Gambhir, India’s task was still tricky, but very much doable. Next day needing a further 256, with nine wickets in hand, in Yuvraj Singh’s company Tendulkar scored a relieving century and took them over the line.

This innings precisely summarized his ability to change the momentum and result of a Test match in the space of one session. Sehwag terrified opposition bowlers and captains. I think Sehwag saved many Test matches for India just by forcing opposition captains to delay their declaration. One way to judge the greatness of a player is to understand the impact they had on the sport. In any form of my dream cricket team, Viru would feature at the top of the batting order.

Sehwag has retired from International Cricket and also from IPL. In fact, he practically retired a year back, and I am not going to miss him because everything about his batting is fresh in my mind and will remain. Cricket will continue to be cherished, and people like Sehwag are the reason.