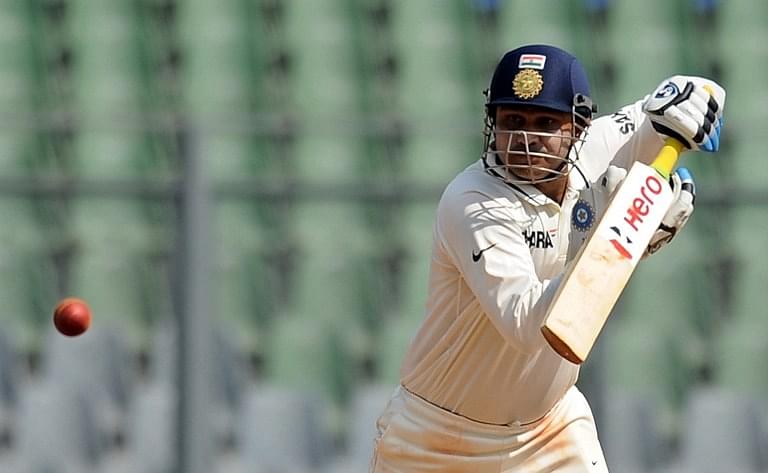 Virender Sehwag has just announced his retirement from international cricket. Was he the most dangerous, unpredictable and flamboyant batsman Indian cricket has ever seen?

His shots came out of nowhere. A disciplined good-length delivery, and he could make it fly over the third man for a six. A yorker, and the ball could split the cover field and race away for a four. A gentle full toss, that gift every batsman desperately wants, and it could be gently driven back to the bowler. One more quality delivery from the bowler trying hard to compensate for the error that went unpunished, and the ball would be sent flying somewhere else for a four once again.

Where did one bowl at Virender Sehwag? For he knew no rules of cricket, the textbooks had passed him by. He played the gully cricket he had grown up on, and took it to the highest international level. He had a bat in his hand and and that weapon existed to hit the ball as hard as he could—when he felt like it. Which was most of the time.

How could one tame his quest for scoring fours, well over 2,000 of which had turned him into a run-scoring brute in Tests and the one-day internationals? If his boundaries were somehow stopped – or, he chose to stop scoring them – what about those sixes? He left the world’s bowlers perplexed. Perhaps, there were times when he surprised himself with his own stroke.

Until his superhuman dazzle disappeared a few years ago, Sehwag, having made his ODI and Test debut in 1999 and 2001 respectively, had manufactured his definition of a natural cricketer. He was, quite simply, a one-man demolition machine, who hardly needed any footwork to score those 8,586 runs from 104 Tests (average 49.34) and 8,273 runs from 251 ODIs (35.05), which he did.

Great eyesight, sublime reflexes, raw power and a steely resolve were the four pillars of his batting technique. That absence of courage didn’t impede his fluency was memorably seen in the Boxing Day Test at Melbourne in 2003-4, and numerous others that followed.

Facing a Brett Lee hungry to make an impact after missing the first two Tests, apart from the other Aussies at home in their home soil, he restrained his aggressive instincts, got hit on the helmet twice in the first hour, and paced the initial part of his innings such that the viewer might have been assailed by the unexpected.

The result: he scored 195 off 233 balls in slightly more than five hours before holing out while trying to hit a six to reach his double hundred.

Did he learn a lesson, one which taught him not to try and hit sixes and fours when a landmark is round the corner?

If it had, he wouldn’t have gone after the Pakistani spinner Saqlain Mushtaq and clouted him for a six in Multan a few months later. This time, he was eyeing a triple century, which he scored before getting out after scoring 309.

This kind of aggressive intent might have turned into self-destructive daredevilry for a lesser mortal. But not for Sehwag, who would score one more triple century in the 2007-008 series against South Africa in Chennai. His innings of 319 came off 304 deliveries. Studded with five sixes and 42 fours, this was the fastest ever triple ton scored by any Test cricketer. For the batsman himself, however, this was just another happy day at work.

Always a statistician’s delight, Sehwag, during his days at the top, made the world sit up and watch his pyrotechnics because he was barely concerned about his personal landmarks. If India had one instinct-driven batsman, who could transform the outcome of a match, Sehwag, for many years, was the go-to man.

Against Sri Lanka in Mumbai in 2009, he massacred the visitors’ bowling attack to pile up 293 off 254 deliveries with the help of seven sixes and 40 boundaries. The runs kept on adding up. He hardly seemed to realise that he was racing away to another triple hundred, which he did not reach. Didn’t matter to him. He had helped the team reach an impossibly high score of 726, which resulted in a massive win.

In a career dotted with 23 centuries in Tests and 15 in ODIs, he was expected to be the first Indian to reach the magic figure of a double hundred in the latter. Sachin Tendulkar got there first. But when Sehwag followed suit against the West Indies in Indore in 2011, he reached 219 off 208 deliveries.

He had scored his runs at an excellent rate; yet, for him, this could have been like batting in a Test match. After all, it was only in 2009 that his 293 against the Lankans in the five-day format had been registered at a faster pace.

Today, the cricketing journey of a man, who, unknowingly, created many fascinating memories as a batsman on the international stage has finally ended. Gautam Gambhir, his former opening partner, has called him “India’s greatest and the best opening batsman.” Did Gambhir get it right? Let us try not to ask that question. It is unfair scrutiny of an emotional statement of a man, who watched him bat from the other end.

Expectedly, Tendulkar, M.S. Dhoni, Harbhajan Singh, each one has tweeted about what Sehwag has meant for Indian cricket. Senior statesman and former skipper Bishan Bedi has said: “He’d be the Victor Trumper of India,” referring to the legendary Australian batsman whose name has been obscured with the passage of time.

Tendulkar, Sourav Ganguly, Rahul Dravid and V.V.S. Laxman, the other four of the dreaded Fab Five quintet of Indian cricket, have retired from international cricket. Sehwag, the youngest of the lot, had lost his fabled touch in recent times. He would have needed a series of miracles to make a comeback to the Indian team. But, it did seem, from time to time, that he was still hopeful about making a comeback.

Now, he has retired. With his announcement, the sun of the Fab Five has finally set.

Will Indian cricket see the birth of five such batsmen at the same time in future? It might, if exceptionally fortunate, but certainly not another Sehwag, the first and last of his kind. We—and cricket—will miss his utterly carefree genius. Such men have rarely taken the field and sustained it for more than a decade, and we should be grateful that we were there when he was heaving the best bowlers in the world over the ropes, while humming old Hindi film songs under his breath.