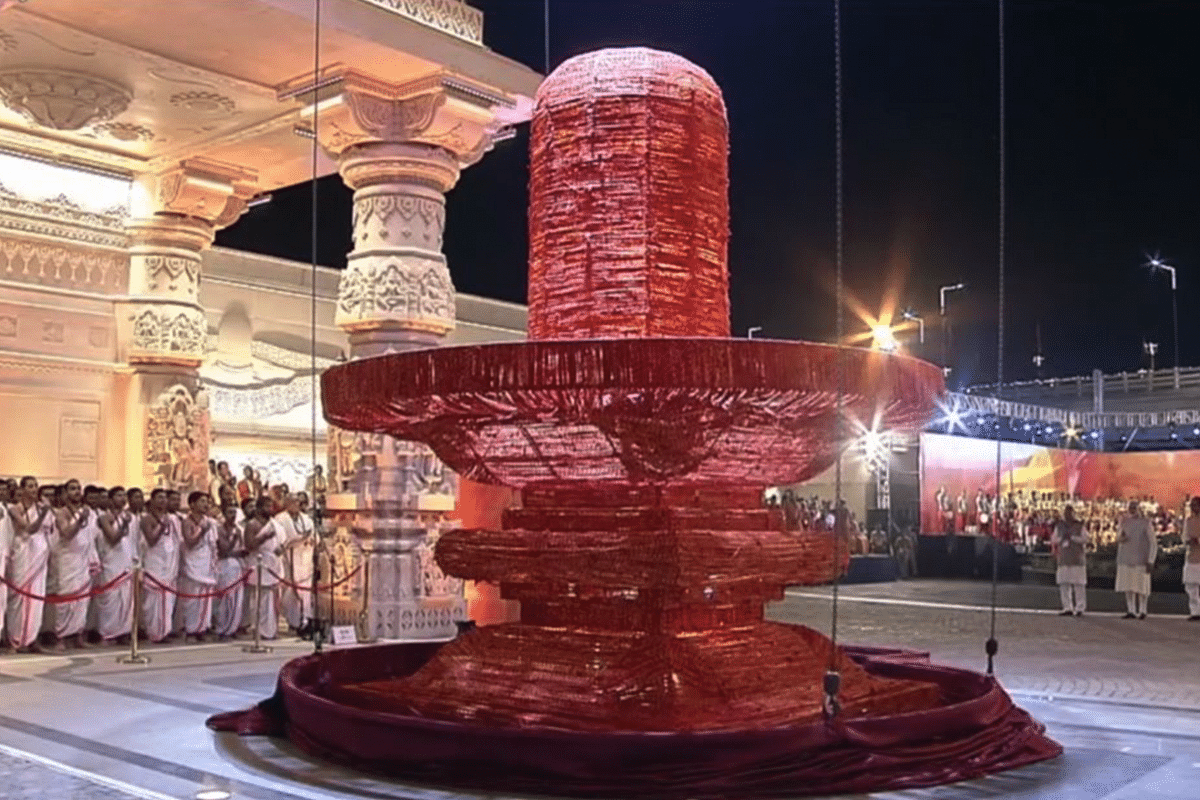 A few hours before the lokarpan of the massive space surrounding the temple of the Lord of Time himself, now named ‘Mahakal Lok’, Madhya Pradesh Chief Minister Shivraj Singh Chauhan traced the journey of the project as he addressed a group of people in the city.

In 2016, when the Simhasth Kumbh took place, which is said to have seen over 75 million people in attendance for a dip or snan in the Kshipra river, is when the idea of crafting the Mahakal corridor was born.

And in time for 2028, Simhasth aims to transform the entire space around the two key points of the snan - the temple and the river bank.

The project was an outcome of the Vichar Mahakumbh, a confluence of various religious heads, thinkers, opinion makers and leaders which came out with a 51-point manifesto, that contained guidelines and action to be taken to ensure a better world for our coming generations.

One of which was the need for activities that foster spiritual, religious, and cultural revival.

“So in 2017, we decided that, given that crores of people come to Ujjain for the darshan of Mahakal, we could work to acquaint them with the tales of Mahakal maharaj and Shivaleela episodes could be created in the extended premise of the temple,” he adds.

Two of the biggest challenges were the reclamation of the Rudrasagar lake which had all sewerage flowing into it and the relocation of over 800 families who had been living there.

"We decided thus to revamp the entire area and make it the Mahakal van. And PM Modi was the inspiration behind the Vichar Mahakumbh."

"So when we discussed with him, he too said that people’s experience of Ujjain, especially when here for the Kumbh should not be restricted to just the dip and temple visit,” said Chouhan, on what led to the Mahakal corridor project, that kicked off after cabinet approval in 2018.

As the first phase neared completion, since the idols were ready, and the murals were all in place, the government decided for a lokarpan as the second phase will take yet another year and they didn't want it to stay closed until then. "Which is why we sought that our PM inaugurates and declares it open for the public”.

Which he did on 11 October 2022, after visiting the Mahakal temple and performing pooja to the Jyotirlinga.

And his inaugural speech left the audiences, both present there and those witnessing it from across of world, scholars, and laymen alike, moved by the unapologetic, loud, and grand display of our cultural inheritance.

“ It is certainly good times for our country because we have our top leaders taking pride and joy in being part of such ceremonies. Else, leadership would always be hesitant. In reality, it is a very momentous event for our country that has put this city back on the global map,” says senior scholar, former vice-chancellor of Vikram University Dr. Balkrishna Sharma.

“Having been born and brought up in Ujjain, it was saddening that some years ago, despite its religious, cultural, and educational significance, when I would tell people I am from Ujjain, I would have to give Indore for a reference,” says Sharma, expressing content that its glory would no longer be only relegated to the pages of history.

Sharma went on to explain how 'Like PM Modi mentioned in his speech, this city though is synonymous with Mahakal, is significant for various other reasons too'.

“ It is a city which has the rare distinction of being one among the seven sacred towns, one among 12 jyotirlingas are here, one of the 51 shakti-peethas is here, of the 8 prominent Bhairav temples one is here, of the four sacred rivers where kumbh takes place one is shipra which is here."

"It has been called the nabhi desh or manipura desha, used to be the Greenwich of yore and its time was taken as the standard. All these features are not to be found in any other city, although each of these different aspects exists in some cities”.

“Krishna studied here. A poet and seer of Kalidas’ stature lived here. It was called the apex center of learning and education for thinkers and poets.

But given today’s times and the future, it was important to create something that get people to visit this ancient city once again. And to that end, Mahakal lok is a very significant effort“ shares Sharma.

Another senior scholar from the city appreciates the efforts being made to put the city on a global cultural tourism map.

“A cultural revival is taking place. PM Narendra Modi and his team have shown their intention of following the path of Dharm through their actions."

"The biggest example is the Kashi Vishwanath corridor - the difference it has made for the devotees with the facilities and enhancing the beauty of one of the most ancient towns. The other ancient town is Ujjain. After Kashi, it was natural that they thought of it,” opines retired IAS officer and former VC of Ujjain’s Sanskrit University Mohan Gupta.

Although he wishes the effort doesn't stay restricted to increasing footfalls but also achieves academic and religious goals.

But a beginning has been made, he says. “And maybe, with the right efforts, even if people come as tourists but leave as pilgrims,” he adds.

What was essentially a cluster of hundreds of houses giving a bird’s eye view of Mahakal’s abode being one difficult to spot, has been released from the maze of encroachments that was his extended ‘prangan’.

From waiting in long serpentine queues, which on occasions would often be a wait of minimum two-three hours before Darshan, the corridor will ensure paced out and much better handling of crowds.

“And in the meantime, people can learn of tales of Mahadev from the various scriptures, both through the murals and the shlokas and their translations that have been provided below them, as well as scan the QR code which will give them the entire tale” explains Triveni museum director Bhawna Vyas, who has been the cultural consultant for the corridor.

The museum, which was created in 2016, has been accommodated within the corridor and will provide an apt entry point to the world of Mahakal from the Nandi dwar.

The Nandi dwar, where PM Modi did the lokarpan with a slow unveiling of a Shivalinga installation, is one of the gateways to the Mahakal Lok and the entrance arch has a depiction of the dikpals and matrikas on it.

The other entrances are the Pinaki dwar, Neelkanth dwar on the other sides of the temple, or the Mahakal setu.

As one enters the 26 feet high Dwar, the murals take one on a journey of the tale of the ash-smeared one. There are also depictions of the story of Mangalnath or the birth of mars in Avantika, another name of Ujjain, that of Devi Anusooya, and the story of river Kshipra and her origin among others.

The corridor also provides space for performances in the form of a Nataraja theatre that will have the Rudrasagar lake as a backdrop. The open-air theatre is named Nataraja Rangshala and will be able to host 500 people in the audience.

The path is lined with 108 stambhas or pillars which depict the Ananda tandav dance form of Shiva and trees of religious significance including Rudraksh, Bel, shami, Kadam among others.

While the corridor was to stay closed for a day post-inaugural, Chouhan declared it open for the public on the same day. And as we visited the following morning, every mural, and every installation had turned into a selfie spot, with people from across the country glad to be visiting it on day one of its openings.

Echoing Kalidas’s description of Ujjain as a ‘piece of swarg’, visitors who had witnessed the illuminated corridor on the previous night, said, the words of the seer poet had been brought alive.

“ This is an excellent gift by our PM Narendra Modi. The view in the daytime is nothing. The glory of this corridor at night made me feel like I have landed in Swarg."

"The pink stone structures illuminated with all the lights gave the entire premise a golden glow and it felt like a bejeweled space with the entrance and some structures resembling golden palaces,“ said Ashok Sharma who had come to witness the inauguration from Jahanabad Bihar.

Resting under a tree in the corridor, Sharma was all smiles, his joy outdoing the ’Jai Mahakal’ chandan kumkum tilak on his forehead as he went “ the lights, the fountains, all of it …laga ki swarg se kam nahin hai”. His wife nods in gleeful agreement.

As one of the tale goes, this is a city Maha Vishnu created for Shiva in the mahakala vana that looked such that Mahadev himself called it Kanakashringa.

“It was sheer coincidence that we got to see the corridor last night. We didn't think we would get an opportunity. But yes, sharing that experience in words is beyond me, it looked that beautiful, “shared Archana Garima.

“It also is a very convenient facility for seniors who would want to say take a stroll or even visitors like us who after finishing Darshan would want to rest somewhere. Our train is at 3 and we have checked out which has saved us an extra day of hotel fare too, as we came took darshan and now can sit here until it is time for us to head back” adds Sharma.

Octagenarian Yashoda Bai who was there with her grandson going around the corridor and is glad that ‘ her Ujjain has been beautified’. ” I am feeling very proud to be Hindu, “ said a visitor from Patna. “I have been clicking selfies at every point in the corridor,” added a third.

“There is no place else in the country where there is something like this,” said two young priests, natives of Ujjain.

A lot of young travelers too had made it to the corridor on day one. “It is our first time in Madhya Pradesh and it was one of our classmates who told us about this. But we are very happy with the experience of this corridor and we wish we have such a project in our state also as this would mean many more people visiting it” said Deshmukh Rajeshwar, from Telangana, who was visiting Ujjain with his college friends.

As per the master plan, phase 2 of the project(underway), which is expected to be completed by June 2023 will entail the conservation and adpative reuse of Maharajwada I, rejuvenation of Rudrasagar and its surroundings.

And towards accommodating such crowds, whose numbers touch 7.5 crores visitors in two months during the Simhasth, Mahakal Lok has expanded the temple precincts by nearly seven times and aims to set a precedent for other heritage cities.