Socotra: The Deep Indic Roots Of One Of The Remotest Places On Earth 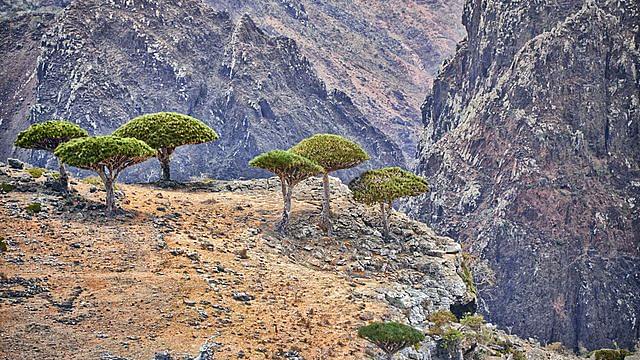 Have you ever seen a dragon’s blood tree? No, it isn’t something out of the sets of the Game of Thrones. This is a real tree whose scientific name is Dracaena cinnabari and is considered to be of immense value because of its product – a red sap that oozes from the trunk of the tree, from which it gets its name. The tree is found only on the remote island of Socotra, off the coast of Yemen, once home to a thriving culture of Indic people.

Socotra is one of the most alien-looking places on Earth. It looks like something out of a science fiction film, so unreal is its landscape. It is also home to some 800 species of flora and fauna, over a third of which are endemic – which means they are not found anywhere else on the planet. Only two other islands on Earth have a higher number of endemic species – Hawaii and the Galapagos Islands.

As for dragon’s blood, the people of Socotra and Yemen believe that the sap from the dragon’s blood tree is actually the blood of a dragon and has magical properties. The blood red sap was used in magic and alchemy in the Middle Ages and continues to be a prized commodity down to this day, as the locals believe it has medicinal properties and can cure a large number of diseases.

The Deep Indic Roots of Socotra

Socotra has remained cut off from the rest of the world for much of the modern period due to political reasons. The first airport was built in Socotra only in 1999. In December 2000, a group of newly arrived Belgian speleologists (experts in the study and excavation of caves), working under the Socotra Karst Project, made a startling discovery – deep inside a cave in the Hoq region of Socotra they found a number of inscriptions, drawings, and carvings in some of the earliest writing systems of the world.

Led by Peter de Geest, the researchers found, to their surprise, that the writings were in ancient Indian Brahmi and Kharoshti scripts and dated back to a period from the second century to the fourth century of the Common Era (CE).

The Indologist Ingo Strauch deciphered these writings and discovered that for the most part, these writings consisted of names of various sailors and settlers who had visited the island and perhaps taken shelter in the cave. Each name is followed by the person’s city of origin in India. Thus, Strauch finds the name of one Vishnusena from Hastakavapra in the Gulf of Cambay inscribed in Brahmi, and the name of a certain Upasila from Gandhara (modern-day Afghanistan) inscribed in Kharoshti. Since at this time, the major South Asian port from which nearly all the trade with the Western world took place was Bharuch on the Gujarat coast, researchers construe this as strong evidence that sailors and traders from as far away as Afghanistan travelled inland first to Gujarat, before undertaking voyages to the West.

The Socotra inscriptions constitute the most Western evidence of Indian writing known till date.

Further, researchers believe that the name “Socotra” is derived from the Sanskrit Dvipa Sukhadhara – the island of bliss. Some scholars also believe that the name could be of Arabic origin, where suq translates to emporium and qutra to dragon’s blood. Either way, what remains undisputed is that ancient Indians were frequent visitors as well as settlers on this remote island.

The island supports a small population of about 40,000 natives, who are ethnically a mix of East Africans, Yemenis, Arabs, and Indians. It is believed that Thomas the Apostle – the man widely credited with bringing Christianity to India – stopped in Socotra on his way to India in 50 CE. As a result, the natives took up the Christian faith which remained the predominant form of worship there until the sixteenth century when, under the influence of the Mahra Sultanate of Yemen, most inhabitants converted to Islam.

Another major Indic influence on Socotra is evident from the fact that ghee, a form of clarified butter, is one of the major exports of the island. Ghee originated in South Asia and was taken by settlers and traders to the lands they travelled to.

Despite its strategic location near the Gulf of Aden, Socotra never became a major trading hub due to navigational issues. In the nineteenth century, the British took control of the island and, with the opening of the Suez Canal, the island became crucial to controlling the shipping routes to India. As Bombay was the major landing port on India’s western coast, Socotra became a part of Bombay presidency and was governed from there as part of British India. It remained a part of Bombay presidency until 1937 when it was separated and put under the Protectorate of Aden.

With the end of British rule and the onset of the Cold War, Yemen got divided, like Korea, into two politically opposed halves, each aligned with a different power bloc. South Yemen, along with Socotra, found itself under Soviet influence. As the Marxists took over, the People’s Democratic Republic of Yemen was proclaimed – the one and only Arab communist state in the world.

Since Socotra was located close to crucial oil reserves in the Gulf, the Soviets used it as a secret military base in order to have a presence close to the major shipping routes of the world. Soon thereafter, the island was closed to the world, its use restricted only to Soviet and South Yemeni military.

Only after the collapse of the Soviet Union and reunification of Yemen in 1990 was the island once again reopened to the world. This eventually brought a trickle of new visitors, mostly researchers and anthropologists interested in the island’s unique and, for the twenty-first century, extremely well-preserved natural and cultural heritage. However, accessibility still remained a problem as until 1999, the island did not have an airport.

Socotra’s long isolation from the rest of the world also had one more fascinating consequence – the Soqotrans did not have any script for writing down Soqotri until 2014, even though the language is one of the few in the region that are classified as ‘pre-Islamic’. It was a Russian linguist, Vitaly Naumkin, who, after decades of studying Socotra and its people during the time of communist influence over the island, finally devised a written form for one of the oldest languages in the world!

The Most Alien-Looking Place on Earth

Socotra is one of the most remote landforms on Earth, of continental origin. To put this in perspective, almost all remote islands on the planet are either of volcanic origin, such as St Helena in the Atlantic, or are atolls made of coral reef, such as the Maldives. The island has been separated from mainland Africa for the last seven million years – roughly about the same period (in geological terms) as when the Indian landmass crashed into Eurasia, leading to the formation of the Himalayas.

Socotra has a harsh climate – extremely hot and dry – while being surrounded by the Arabian Sea on all sides. This long geological isolation of Socotra combined with its extremely harsh climate has given rise to its spectacular flora. As for its fauna, bats are the only mammals native to the island, as is often the case with isolated land masses. There are, however, a great variety of birds and over 31 varieties of reptiles. Over 2,000 years of human settlement has greatly impacted the native flora and fauna and the presence of introduced species, such as goats and feral cats, are slowly eating away into Socotra’s native wildlife.

Sounds like the perfect getaway for your next holiday? Not quite.

The civil war in Yemen – widely believed to be the worst humanitarian crisis of our time – has not left the island untouched. In 2015, the armies of United Arab Emirates (UAE) and Saudi Arabia entered Yemen to fight Iran-backed Houthi guerrillas who had taken control of the capital, Sana’a. Saudi-led airstrikes have caused extensive damage to civilian lives and property in the country. Yemen was soon split into an Iranian-controlled north and a UAE-Saudi-controlled south – mirroring the old Cold War-era division of the country into politically opposed northern and southern halves – only this time becoming the playground for the Iran-Saudi rivalry.

As the Saudi-UAE alliance ramped up its presence in southern Yemen, the locals have begun to become more resentful of the occupiers who had first entered as liberators. The UAE has now proposed to hold a referendum in Socotra, appealing to the people to leave Yemen and join the UAE – a move that has obviously riled up the Yemenis. The crisis in Yemen has further made life difficult for Socotrans as the island depends on the Yemeni mainland for most of its needs.

Moreover, there isn’t much by way of infrastructure in Socotra. There are hardly any roads and certainly not any luxury hotels. For now, it seems, the island is better off without these developments. Global warming and rising sea levels pose a threat to Socotra, which is all of 100km in length and 50km in width.

In 2008, Socotra was declared as a UNESCO World Heritage site – a move that should help preserve the island’s unique heritage and culture. While the crisis in Yemen has hampered the work of researchers trying to uncover Socotra’s ancient past, it is expected that once peace returns to Yemen, more knowledge of the island’s ancient Indic roots might emerge in the future.