'Sooryavanshi': Please Keep Your Sociological Analyses Away From My Two Hours Of Leave-Your-Brains-At-Home Entertainment 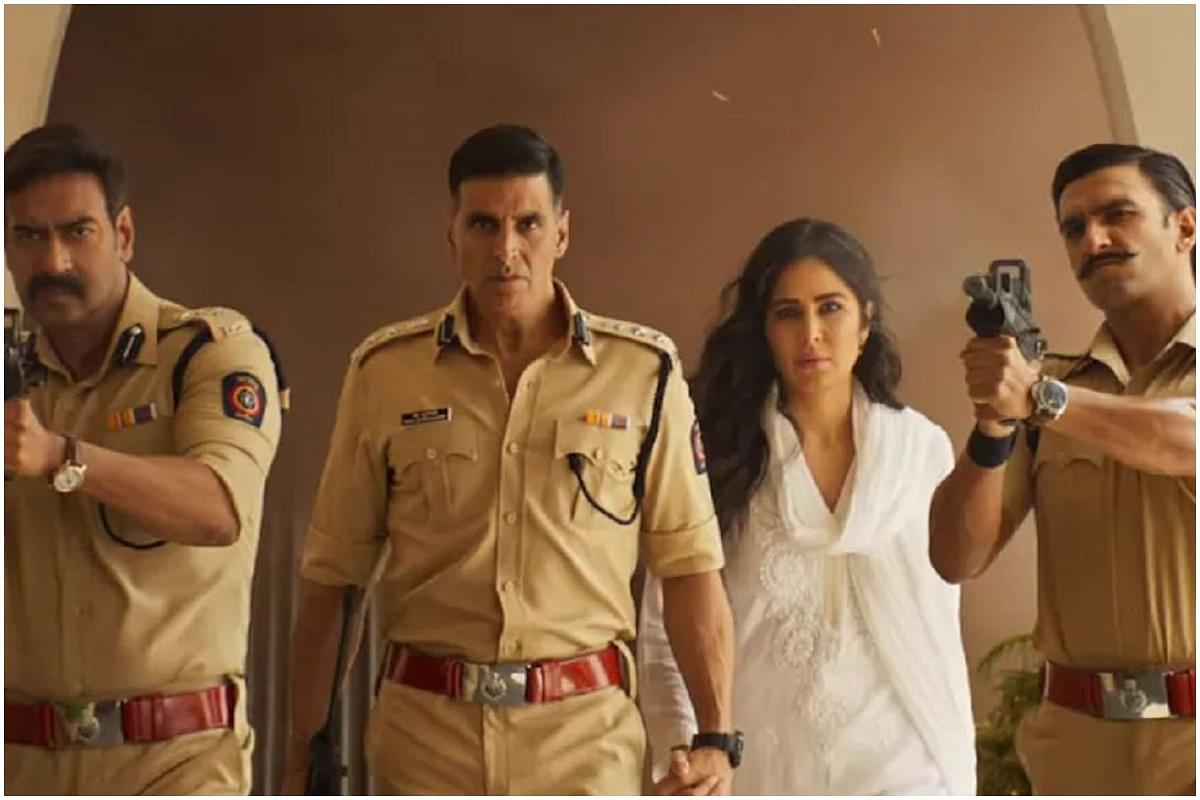 A scene from 'Sooryavanshi'

"If a million people see my movies, I hope they see a million different movies“ said Quentin Tarantino.

For a movie, irrespective of genre, is essentially a canvas of characters that the viewer lives with and interacts for those two odd hours of running time.

Who then has the right to dismiss the value of ‘escape’ that is provided by a genre that claims to do very little more than simply entertain. Recent furore on Sooryavanshi’s portrayal of certain characters or communities, both by those finding it fuelling ‘islamophobia’ and those on the other bank who are accusing it of simplifying a grave issue in the garb of secularism, is plain misplaced activism.

For this is a movie that has a massive nationalistic anti-terror operation at the heart of its plot but has cars flying and rolling over, a police jeep crashing into a godown and there emerges a clown of a cop hip-thrusting his way into the den of a terror gang.

This is a movie where the wife of a top cop of the ATS is a bimbette of a doctor who cares not about giving sermons on family priorities when the team is out to save the city from deadly terrorists.

And anyone who takes elements out of such a mass no-brainer entertainer and dissects it for its intention to ‘portray’ a certain community in negative colours or to ‘whitewash’ the sins of that very community, is far from ground reality and common Indian psyche.

The genre is action comedy and the ‘serious’ plot is just ‘by-the-way’ even if intentioned otherwise. The motive is entertainment, morale boosting and to nudge a cine-audience out of the slumber that it has slipped into on various levels thanks to the almost two year pandemic lull. Simply put, it is comic relief.

And a much needed one visibly given that the cinema has already raked in much moolah. Sooryavanshi is the latest in the series of Rohit Shetty’s Cop Universe films that is set against the backdrop of the 1993 Mumbai blasts.

And like all his other films has a steady dose of cars blowing up at regular intervals, stunts inserted for the joy of having them and serving no purpose whatsoever, a formulaic rerendition of the remix of a classic sensuous number from the 90’s and the most bankable ‘stars’ whose stardom and rise is perceived as relatively organic and not steered by either a name or a lineage.

And the audience that is buying those tickets is signing up precisely for that which is being offered - mindless entertainment, a utopian ‘how we wish it was so’ simplistic social reality, and the massive high of a ‘solution’ that they can witness on screen or fantasise about.

Cinema is an opium of the masses and one that has all the sanction it seeks. And the genre of cinema that Sooryavanshi belongs to is as explained earlier one of ‘no-brainers’. Which is also why director Rohit Shetty has every right to interrupt the ‘naive’ journalist who asked about the portrayal of the “MUSLIM” ‘in a good way as well as the bad way’ which is reportedly ‘seen to be problematic’.

“If I ask you one question - Jaykant Shikre (the antagonist in Singham) was a Hindu, then came in this universe (Singham, Singham Returns, and Simmba), a Hindu Godman who was the villain. In Simmba, Durva Yashwant Ranade (played by Sonu Sood) was a Maharashtrian. In these three films, negative forces were Hindu. Why wasn’t that a problem?”, asked Shetty.

For it is only a certain class of film critics and intellectuals who try hard to find non-existent agenda in content that is plain popular perception as well as reality.

That terrorist sleeper cells are staffed by people across the border, who since the very nation was created based on the religious identity will have to by default be Muslims, that there are Indian Muslims who are Indians first and Muslims later, that a city like Mumbai believes in ‘moving on’ and facilitating life and living even in the face of the worst tragedy that can strike it is truth. A truth that dismantles no other. A truth that doesn't seek to whitewash the crimes of any organised group or give it a sanction that absolves it of all else that it is accused of.

Sooryavanshi is a story whose plot is based on real events but whose flavour is aspirational and wishful, bordering on utopian ‘happily ever after’, like is characteristic of the genre.

Which also explains why Shetty insisted and waited for a theatrical release - for this is cinema that’s to be watched on the large screen - larger-than-life characters and fancier-than-possible events that grants you the liberty of suspension of thought, reality and all else for those two hours of entertainment.

That being said, this review in no way denies the potency of the film to give the audience a mild headache with the extended minutes of screen time for every new ‘cameo’ cop entry and his concluding action sequences that can be an eye and ear sore. But pop a mouthful of popcorn and those ‘too shall pass’.

Activism and over-intellectualisation should be restricted to media that claims to do any of that or may be even distantly intended in that direction, not unleashed at every instance that looks inviting.