Sri Ramanuja: Lessons For All From A Life Divine 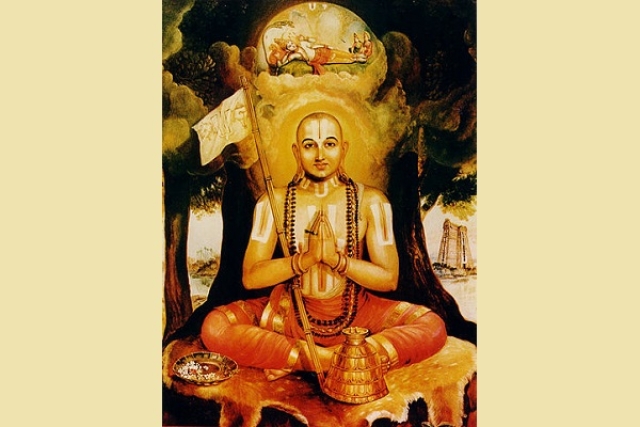 The great Acharya reinforced the true purpose behind the Vedic ritual universe emphasising Vedantic liberation as the goal. With that purpose ignored, the rituals would render oneself as if lost in a desert.

Unfortunately, with the passage of centuries, Advaita itself became a dry desert of debates and dialogues, interpretations and counter-interpretations – an egoistic, purposeless journey filled with word-dunes and mirage waters which seemed like oasis of wisdom.

It was then that Sri Ramanuja came to the rescue.

It was not an easy task. The previous system had become inhumanly fossilised with no space for Bhakti which was even seen as inferior to the philosophical debates and interpretations. The notion of birth-based superiority and social exclusion were accepted in a land which preached that the seer and the outcaste were one in their essence.

Sri Ramanuja battled all these not just with his words but with every deed of his life. Sri Ramanuja, said Sri Aurobindo, embraced the heart of the Vedic Truth.

His life-deeds show immense greatness even in what one would consider the most mundane things. The lessons they bring can guide generations of those who seek to serve society – irrespective of to what clime, age, creed or nation they belong. Some of his life events like the one with Villidasa are well known.

There are many more which are not known outside the traditional Sri Vaishnava circles.

This narration is for the ordinary Hindu who knows the name of Sri Ramanuja and some of his great accomplishments including the proclamation from the temple top – but not most of the other aspects of the emperor of the Yatis.

The life incidents of Sri Ramanuja are great lessons for every human being who wants to serve the society irrespective of country, creed or clime. Here are a few:

No one can be excluded

Maraner Nambi was a great Vaishnavaite soul who was a contemporary of Sri Ramanuja. He belonged to what was then considered as a 'defiled community'.

It should be remembered that this phenomenon was not unique to India at that time. Defiled communities and institutionalised social exclusion were common to all cultures. But what is unique to Sanatana Dharma is that it alone has made a strong critique of social exclusion and social stagnation consistently.

In Vaishnava tradition, it is said that the aforesaid saint was called Maraner Nambi not only because of his native place but also because he was considered as equivalent to Maran or Sadagopan or Nammazhwar, the foremost of the Azhwars. [Maran-Ner: Similar to Maran].

Nammazhwar himself was born in the fourth varna. But he is celebrated in Vaishnavism as the purohita who, knowing the four Vedas, had brought the essence of them with him (‘Chaturmarai Purohithan’).

In the tradition of Azhwars, the only sin that leads to exclusion is the insult of the bhaktas of Vishnu. And by insult it is meant just asking in which community a bhakta was born – because the only community for a bhakta is not the community of his or her birth but the community of the devotees.

This led Periya Nambi’s daughter, Athulai, to go and complain to Sri Ranga, the deity, himself, stopping his chariot procession. Tradition has it that Vishnu himself declared through the archakas that performing the last rites of Maraner Nambi by Periya Nambi, the guru of Sri Ramanuja, was indeed a Dharmic deed. Then Vishnu ordered the very head of the group that had spread the thorns around the house to remove the thorns and carry Periya Nambi on his own shoulders and place him in the same chariot as that of Perumal.

Where to move away?

On one of the days when Sri Ramanuja was on his Dig Vijaya, he was proceeding towards Thirumangai Azhwar’s birth place. On the way he and his disciples encountered a woman, from a community considered inferior, coming in front of them. They asked her to move and make way. She responded saying that as all the universe had been sanctified by the three measures of Vishnu’s feet, where could she move?

(Alternatively, it is said she asked if she had to move to the right where stands the spot where Vishnu gave darshan to Thirumangai Azhwar or to the left, where the temple stood, implying that all the land is sacred and pointing out the futility of asking anyone to move away.)

It is said Sri Ramanuja paid his respects to the woman and said that she was more qualified to wear the Sri Vaishnava marks than he himself.

Sri Ramanuja was also called Thirupavai Jeeyar because he was enchanted by the Thirupaavai verses of Aandal. He used to recite them when he went out for getting his daily food through bhiksha.

One day, he was reciting the verse which sang of a girl, who was Nappinnai, playing with a ball inside the house, being called by her friends to come and join their team singing the praise of Maha Vishnu.

As Sri Ramanujar sang this verse and asked for bhiksha, he was standing before the house of his teacher Periya Nambi.

His daughter Athulai, who was playing with a ball, happened to open the door with the ball in her hand. This became the vision of Nappinnai Devi herself for Sri Ramanuja and he simply fell at her feet right at the door.

The girl got frightened and went and told her father that a person who looked like a sanyasi fell at her feet and hence it could be a ‘Ravana sanyasi’.

Her father understood what had happened at once. He went and praised Sri Ramanuja with teary eyes saying none could experience the verses of Aandal as he did. Athulai went and asked Sri Ramanuja to forgive her like a sister.

Servant-maid for the bride

When Athulai was given in marriage, her husband's family ill-treated her because her father, Periya Nambi, was not rich. In those days, rich families used to send servant-maids along with the bride.

Again, such practices were not unique to India. As late as 19th century, Helene Demuth, a peasant girl, was sent as servant maid to Karl Marx’s house by his wife Jenny’s mother.

As Periya Nambi could not afford such a service, Athulai was constantly insulted by her in-laws. At one point she could not tolerate it and she came and complained to Periya Nambi who directed her to Sri Ramanuja.

When Sri Ramanuja heard about this he sent none other than Muthaliaandan – who was not only the nephew of Sri Ramanuja but was known as his ‘Tridanda’ – the staff of renunciation which he carried.

Muthaliaandan reached Athulai's in-laws' house; introduced himself as the servant-maid of the bride and started working just as a servant maid – cleaning the household and cutting the vegetables.

The in-laws were alarmed at this development. A great Bhagavata doing chores in their house would bring them sin. They ran to Periya Nambi who in turn directed them to Sri Ramanuja. When they realized what had happened, they asked for forgiveness for their rude behaviour.

Koorathazhwan was both a rich man and a pandit. When he decided to follow the mendicant life along with Sri Ramanuja, his wife also came along. She carried with her the golden plate in which Aazhwan loved to have food. When Aazhwan saw that his wife was carrying this golden plate he simply got it from her and threw it away.

It was to him Sri Ramanuja gave the responsibility of writing in the palm leaves the Sri Bashya which Sri Ramanuja would dictate.

Sri Ramanuja said to Aazhwan that he should write only if he agreed with the meaning of the verse. As Sri Ramanuja dictated, Koorathaazhwan started writing but at one point he stopped and told Sri Ramanuja that the particular verse of the commentary was contrary to the Bhakti tradition.

Sri Ramanuja got up and told Koorthaazhwan to write his own commentary and left the place. Koorathaazhwan was clear. ‘My mind too belongs to Sri Ramanuja. So my unacceptance too is because of him’, he said and was firm. Sri Ramanuja returned after sometime and said that he agreed with Koorthaazhwan and changed the verse appropriately.

Sri Vaishnava Siddhanta has its roots in the verses of Nammazhwar who is hailed as the one who made Vedas into Tamil. He propounded the wonderful vision of all the universe as the body of the Divine and Vishnu as its life-force permeating existence.

Sri Ramanuja wanted to be considered as the very sacred feet of Nammazhwar. During his Digvijaya, as he approached Thirukurukoor, the native place of Nammazhwar, he asked two girls on the way for directions to the sacred destination. In turn, the two girls asked if he knew a particular verse in Thiruvaaimozhi – which speaks of coming at the hearing of the sound – implying the destination is quite near.

Sri Ramanuja was overwhelmed by how spontaneously the girls gave the meaning to the verse and paid his respects to them.

Meanwhile, the parents of the girls saw the way the girls talked to Sri Ramanuja, the greatest Vaishnavite saint of the time, and asked for his forgiveness.

Sri Ramanuja had a great veneration for Nammazhwar. In Sri Vaishnava temples, the sacred feet of the Lord are placed on the heads of the devotees. It is called Sadari – because of Nammazhwar – Sadagopan.

Near Thirikurukoor, Sri Ramanuja saw a washer-man. He had four sons. The washer-man fell at the feet of acharya and then called each of his sons by a different name – all the names of Nammazhwar: Sadagopan, Karimaran, Vahulaparanan, Kurukoor Nambi.

Traditional accounts say that it was the one time when Sri Ramanuja himself felt his family life missing. ‘If I had children, I too would have named them after Nammazhwar and called their names sweetly and frequently’ he is said to have thought.

His life filled with such incidents, and stands to this day and probably till humanity lives, as the light house directing our lives to the values through which we should live if we are to serve the Dharma and rashtra. It is the Bhakti Dharma of Sri Ramanuja that created the resistance to the aggressive proselytisation of the invaders and saved the culture and spirituality of the nation.

Post script: ‘This book will make you feel the beauty and mystery behind all the stars', the book was a Tamil translation of The Universe and Dr. Einstein by Lincoln Barnett. Those were the words with which my father gave me from his library the first book. Last month, during a dining table conversation, he told me, ‘you should read this book if you want to serve the society with love and make it a spiritual Sadhana. I will give the book once I finish reading it.’ He then mentioned a few incidents from the book which turned out to be good appetizers. That was on August 12th. Then I did not know this would be the last book my father would read . He got liberated from his body on August 14th.