Ten Thousand Pictures Of Vijayanagara: How John Gollings Has Captured Hampi For 40 Years 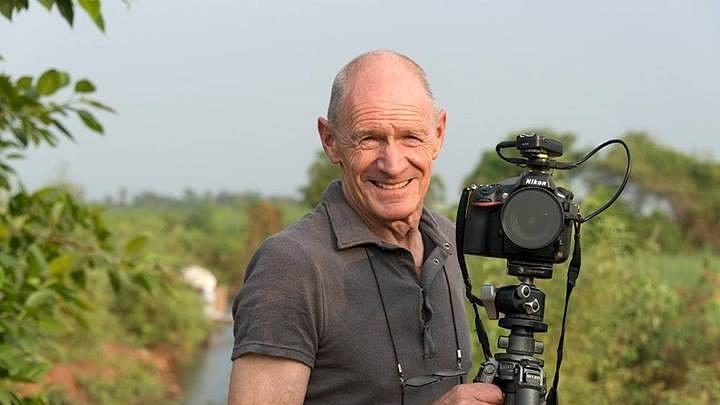 A Google search of Hampi or Vijayanagara will throw up numerous tourism websites and captivating images that tell the grand history of this once majestic city.

One such attempt at virtually probing this lost landscape led me to the works of renowned international architectural photographer John Gollings, who has been capturing this city for the last four decades as part of the Vijayanagara Research Project.

The Vijayanagara Research Project (VRP) is an international group of researchers, which has been documenting and interpreting the remains of Vijayanagara since 1980.

The project is the brainchild of Dr George Michell, whose first visit to the site in 1973 led him to the idea of documenting Vijayanagara. He had come to study early Chalukya temples but fell in love with Hampi.

In 1979, he got John Gollings on board along with few architecture students from Deakin University and Delhi University. This first team published ‘Splendours of the Vijayanagara Empire, Hampi’ in 1981. These efforts laid the foundation stone for an international, interdisciplinary endeavour to “document, analyse and explain the architectural and artistic record of the ruins of this great city”.

Gollings’ eyes and his camera have captured and thereby immortalised Hampi through over 10,000 pictures over the past four decades. His work remains a vital part of arguably one of the most comprehensive research projects on Hampi – Vijayanagara and its past.

An archive of his pictures along with map references can be found at John Gollings Photography website.

While his pictures have documented the city and the tales it tells and holds in its womb of ruins, he has witnessed the city of ruins transform over the past four decades. His latest visit had made news as he wasn’t granted permission by the Archaeological Survey of India (ASI) to use his tripod stating that an application has to be made 15 days in advance.

But this is just one of the million experiences that Gollings has had in this city, which he says ‘he is addicted to’. In a conversation with Swarajya, Gollings shared many such moments from his four-decade engagement with the temple town.

How It All Started…

Recollecting the beginning of this journey, Gollings, who in 1979 joined architectural historian George Michell to begin a documentation of Hampi, said, “we were friends from university in Melbourne. Architecture students joined us to begin measuring the buildings and I started photography with the idea of bring the city back to life with a variety of visual techniques like working at night and selectively lighting the buildings.”

Talking about his experience of capturing the city over the past four decades, Gollings muses saying, “each year I discover new angles, different light and new discoveries and restorations. In the beginning I was trying to recreate the living city by inclusion of people and selective lighting to hide the destruction. Nowadays I am trying to document the existing condition because there has been significant reconstruction and new discoveries which help describe the original city”.

Here are two of Golling’s captures of the Hampi Bazaar through the years, which he says “provides a good example of change,”.

Gollings definitely isn’t very pleased with how things have changed over the years. “Because of recent government efforts to move the inhabitants and close the shops Hampi has lost a lot of its charm and attraction and currently the unrestored bazaar is quite ugly.”

Talking about the impediments to his work, which he says are making it difficult for a serious photographer to work in Hampi these days. Gollings elaborates saying, “ugly fences have been erected around most of the monuments which blocks the view, the gates are shut early which stops photographing in the best light. There is no easy or quick way to get a photography permit from the ASI office in Kamalapuram and tripods have been banned which makes considered images difficult.”

1. Remove the fences around the monuments

2. Restore the Hampi bazaar as quickly as possible and the allow shopkeepers to build stalls behind the bazaar because it is a living village and should stay that way

3. Allow boutique small hotels to be built near the river to encourage tourists and provide a viable income

4. Make it easier to get a photography permit at the ASI office in Kamalapuram. Photographers would happily pay if it was issued on the spot instead of a bureaucratic 14 days by which time the tourist would have departed.

‘I Am Addicted To Hampi’

Four decades of an association is definitely no small feat and Gollings’ ‘addiction’ is not just owing to those memories captured by his lenses but also by those he holds close to his heart. While the way the site changes and his attempt to find new angles makes the visits a ‘wonderful challenge’ it is the ones who have been with him on this journey that make it more special.

“Hampi has provided some of my most vivid images and experiences as a photographer and a person. My friends are like family and I feel very comfortable living there every year.”

Appreciative of the hospitality of his assistant and hosts at Hampi, he recollects how they even ‘saved his life’. “In the mid-eighties, I got very ill at Hampi, too ill to travel home in fact and Veeraya, my first assistant and the father of Jambaya my current assistant, kept me alive by cooking sago porridge and spoon feeding me.”

They have also been instrumental in many of his special captures as they take him around to many unfrequented sites, exploring special carvings and explaining the hidden and meaningful details.

A Picture Tells Many A Tale

“There are stories in the images, mostly about the adventure of finding and making them,” he says narrating an episode of capturing a beautiful frame of the Hanuman temple. “The small Hanuman temple on the Hemakuta Hill is generally locked up with a steel door and broken light bulbs. In 2006, by some miracle the door was open and a new bulb installed which allowed me make one of the iconic images of Hampi.”

While climbing Matanga Hill at dawn has also provided great memories and important images of the overall site. Gollings’ most memorable capture he says is the dusk view of Virupaksha from the Hemakuta Hill through the massive granite boulders. “This image defines both the architecture and the landscape that are both memorable and typical of Vijayanagara.”