The Balti Nightingale: How A Singer From Ladakh Has Become A Sensation In PoK 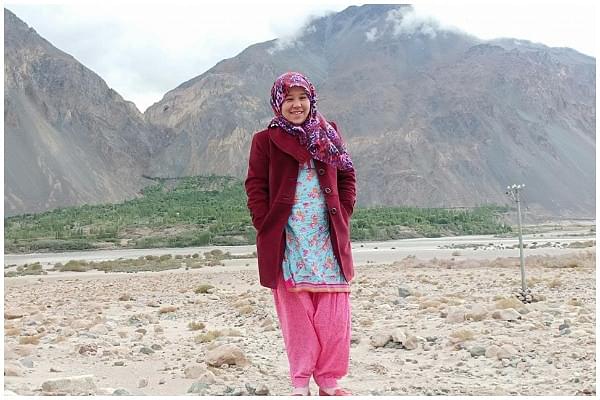 Her community, once Pakistani in nationality, part Tibetan in heritage and past, lives in five villages in Ladakh. People on the Indian side also speak Ladakhi and Hindi.

Along with the Balti-speaking community in Gilgit Baltistan, they make Sherine's staple audience.

Sherine Balti’s songs, most of them in Balti and Ladakhi, reach the people of Gilgit Baltistan through social networking. A sense of nostalgia wraps her singing.

It has made the Balti speaking people in India and Pakistan-occupied-Kashmir (PoK) find a voice they had been searching for but were not expecting it to emerge in such gentle boldness.

Sherine's songs are talking to the Balti speaking community "sarhad paar". They seem to be leaving her listeners with a deeper onset of spoken and unspoken emotions about the concept of belonging. The medium is Balti, "asli zubaan", as Sherine describes it proudly.

"People on the other side of the border call me sarhad paar se surili awaz (the melodious voice from across the border). They know me as a singer who is preserving Balti culture," says the singer who was awarded by Jammu and Kashmir state.

She keeps her singing between studios in Delhi and venues in Jammu and Ladakh. Sherine seems comfortable singing on a dais, and she is mostly at home performing live.

Romantic songs have no room in her practice or performance as of now.

Her songs are about the region, landscape, culture, farms, fruits — such as apple, khubani, and grapes. The songs are about nature, local culture, community and the old times (descriptions of these have been passed on to her by her father, and to him, from his father, orally).

Among her now famous songs, Grifshat Sula Beik and Tsertragi Jusay Jusay are two she seems to be winning hearts with.

"These songs address what bind us culturally; nostalgia, and love for nature, are two aspects." She uploads her songs on YouTube, shares them on social networking sites.

Her listeners from PoK celebrate some of the familiar songs in their daily lives. The proof of this ordinary celebration is generously shared with Sherine on social networking.

People's expressions of gratitude towards her are various.

A fan in PoK recorded a video tour of Baltistan's beautiful landscape — Sherine's song in Balti can be heard in the background — it's running on his car's music system.

Yet another follower wrote a song in Balti for her to sing — in his appreciation for talent. Women from PoK often address her as "sister".

In her videos, Sherine breezes through the Ladakh landscape, lip syncing, smiling, clutching the loose end of her headscarf tightly and carefully.

Like many other aspiring Indian singers, Sherine, too, wanted to try her luck at popular competitions running on Indian television. "I wanted to be trained well, but my family's financial situation did not allow that. I am working on my singing on my own."

Credit for her journey in music so far, her performance, and her rising popularity goes to her father, Ahmed Shah Balti. He is also her song writer.

"We represent a mix of races, and people who appreciate her songs hold many values and cultures in them," he says. He had to face discouraging comments from people in the community for supporting Sherine’s choice.

Unable to educate his kids in Ladakh owing to several factors, he shifted with his children to Uttarakhand nearly ten years ago.

He says, "Girls were not allowed to go to school here 10-12 years ago. I shifted to Dehradun to educate my children. Wahan ke bachche 15-20 saal aage hain yahan ke bachchon se (kids there are much ahead)."

Sherine and her father ran a hostel in Dehradun to support the education of her siblings. The family returned to Ladakh earlier this year.

Today, they are writing new songs and singing them in Ladakh — the new union territory.

He says, "Balti folk song is declining. I know more than 100 songs orally. I am trying to record them through writing — in Urdu and English. I have written around 15 songs for Sherine. Some of the songs even have a mention of polo — the sport celebrated in Leh."

Three political events have shaped the destiny of people of the bunch of villages in this part of Ladakh, according to them.

Sherine's father participates in local fairs and community mehfils held in the region. He accompanies her in singing at concerts held in Ladakh.

He says, "Part of my work is in deewan singing and shayari. The Balti expression is different from Kashmiri. Weddings and food are different. There are some similarities in Ladakhi and Balti culture. Our musical instruments share commonalities and the shahnai is popular and common in both Ladakhi and Balti folk music.”

Shiren's father tells Swarajya that his outlook towards education of the girl child and  attention to Sherine's singing has impressed villagers, and people in PoK. They say, "They were not open to education of girls. Today many are showing willingness to shed the bias when they look at Sherine's journey."

As a singer, Sherine is determined to do more for declining Balti culture. As a budding politician, as a fresh representative in Bharatiya Janata Party's women's wing of her village, she is gearing up to work towards education of the girl child in a new Ladakh.

Alongside, a new song dedicated to khubani will be floating over the pristine Shyok river.