The Colonial Eye: How The Pretentious Indian “Baboo” Came To Be Satirised 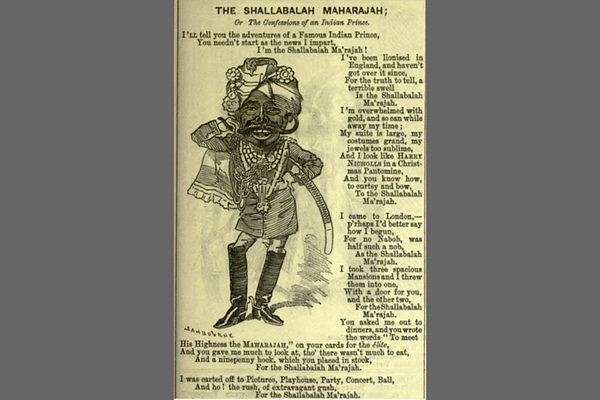 “The Shallabalah Maharajah or the Confessions of an Indian Prince” (Punch, or The London Charivari, January 14, 1888)

The British ‘comic paper’ Punch (subtitled The London Charivari) ran from 1841 to 2002 and used humour and caricature to comment on the follies and pretensions of nineteenth- and twentieth-century British society. It was the Punch magazine that introduced the term ‘cartoon’ as we understand it today. Fashioned after the French satirical magazine The Charivari, it in turn inspired a host of ‘vernacular Punches’ in several British colonies including the Oudh Punch, the Hindi Punch and the Parsee Punch in India.

In its ridicule of British society and the British government, the magazine usually steered clear of being brazenly seditious. Barring that, the magazine mocked and challenged British institutions, symbols, monarchs, politicians and other authorities quite mercilessly. It often took aim at the British aristocracy and later at the middle class. It also ridiculed colonial rule and politics. While covering India and the Raj, the editors of Punch found to their delight the Indian equivalents of both British nobility and the British bourgeoisie.

The impotent maharajas of India, further emasculated by the failed Indian mutiny of 1857, found, upon the British crown taking over from the East India Company, that they’d become even less influential and ever more reliant on the good graces of their British overlords. Accustomed to opulent lives but without any political power, these maharajas had to ingratiate themselves to the British for their lifestyles and settle for the crumbs dished out to them. They were often summoned and hauled up to London to meet with those in charge.

“I came to London,

For, no nabob, was half such a nob,

I took three spacious mansions and I threw them into one,

With a door for you, and the other two,

The sort of self-indulgent but lightweight maharaja, on one such trip to England, is gleefully impersonated in the January 1888 issue of Punch, as the Shallahbalah Maharajah. This bejewelled caricature captures both the frivolity and the piteousness of the diminished Indian maharaja of the time. But the maharaja is not all fluff. He’s perceptive enough to realise that his fate and fortunes are in decline. He notices after all how he’s often snubbed, kept waiting at the castle, sneered at, shown only “some tapestries” and given “much to look at, ‘tho not much to eat”.

Yet he is loathe to abandon his extravagant ways and so swallowing his pride, is determined to take whatever he can get, even if only “a ninepenny hock placed in stock”. Fully aware that he might only be a novelty to Britain’s upper classes, he goes along and plays his part, meeting with British elites always looking for some fun and a chance to hobnob with a real “ma’rajah”. For this road show, the Shallabalah Maharajah receives from colonial India’s real arbiters, the only gifts that our sad, fading maharajahs ever would – “a precious badge and star”. And for being a good sport while at it, the added bonus of one whole “bad cigar”!

and so can while away my time,

My suite is large, my costumes grand,

My jewels too sublime,

And I look like Harry Nicholls in a Christmas Pantomine.”

Indian royalty was not the only group lampooned by Punch. The British administration in India, needy of a whole host of office workers and functionaries, created a class of Indians – the baboos – who took on these roles and then went on to assume along with their clerkships and office duties, the pomposity of their British bosses towards other Indians. The self-important baboo, who used long-winded sentences and simultaneously fawned over all things British, was best caricatured by Thomas Anstey Guthrie (under the pseudonym F Anstey) as Baboo Hurry Bungsho Jabberjee, B A in 1897.

Image 1: Baboo Jabberjee makes a pilgrimage to the shrine of Shakespeare.

“Afterwards we proceeded to the Birthplace, where a very gentlewomanly female exhibited the apartment in which the Infant Bard first saw the light. Alack! there was but little light to behold, being a shockingly low and dingy room, meagrely furnished with two chairs and a table, on which was another of the busts. As I came in, I uttered a remark which I had prepared for the occasion. "IT WAS HERE I SAID REVERENTLY. HERE, THAT THE SWAN OF AVON WAS HATCHED”.

An Indian law student in England, “Hurry Jabberjee” aims to please by speaking highly ornate and fussy “Baboo English” and is obsequious to the point of being cringeworthy. Yet he is oblivious that his language and manners, rather than being impressive, elicit mostly ridicule. Interestingly, an American traveller to India, author Mark Twain in the very year (1897) that F Anstey created Baboo Jaberjee had remarked on the “language of fawning and flattery” used by Indians towards Westerners (primarily the British). Referring to employment letters that he received for the position of “bearer” in India, he’d noted in his memoir, Following the Equator: “strange as some of these wailing and supplicating letters are, humble and even grovelling as some of them are, there is still a pathos about them as a rule, that checks the rising laugh and reproaches it”.

He might as well have been referring to the grovelling Jabberjee who generated many laughs among readers or those who knew similar poseurs. Take for instance, the reverence that a trip to William Shakespeare’s birthplace in Stratford-upon-Avon elicited in the awestruck baboo - “I have frequently spoken in the flattering terms of a eulogium concerning my extreme partiality for the writings of Hon'ble William Shakespeare. It has been remarked, with some correctness, that he did not exist for an age, but all the time; and though it is the open question whether he did not derive all his ideas from previous writers, and even whether he wrote so much as a single line of the plays which are attributed to his inspired nib, he is one of the institutions of the country, and it is the correct thing for every orthodox British subject to admire and understand him even when most incomprehensible.” But while the sights and denizens of London might have left other awestruck but less precocious Indians (“I am a Kulin Brahmin”) lost for words, Baboo Hurry Bungsho Jabberjee, B A, delights readers with regular streams of gobbledygook as he holds forth on everything he encounters. Here he describes an inter-collegiate boat race:

“The notorious Intercollegian Boat race of this anno Domini will be obsolete and ex post facto by the time of publication of the present installments of jots and titles, still I am sufficiently presumptive to think that the cogitations and personal experiences of a cultivated, thoughtful native gentleman on this coerulean topic may not be found so stale dry as the remainder of a biscuit. First I will make a clean bosom with the confession that though ardently desirous to witness such a titanic struggle for the cordon bleu of old Father Antic the Thames, I was not the actual spectator of the affair, being previously contracted to escort Miss Mankletow (whose wishfulness is equivalent to legislation) to a theatrical, matutinal performance which…”

Anstey was not the only one to notice the pretensions of the Indian baboo. Other Britons had remarked on this too, including F M Coleman, owner and editor of the Times of India who described the baboo (in this case also the Bengali baboo) thus: “wanting both in physical strength and moral courage (...) it is to the Bengali Baboo that we are indebted for furnishing a name for the many curious examples of English composition with which most of us are familiar.” Thomas Williamson, an East India Company official, had remarked: “(the clerks) affect great erudition, which they are desirous of displaying on all occasions”. But it was the Punch magazine that immortalised the ultimate brown sahib, a peculiar product of colonial rule, as Baboo Jabberjee!

Image 2: “What wonder that on reading such a sine quâ non and ultimatum my vox faucibus hæsit and stuck in my gizzard with bashful sheepishness, for how to convulse the Thames and set it on fire and all agog with amazement at the humdrum incidents of so very ordinary an existence as mine, which is spent in the diligent study of Roman, Common, International, and Canonical Law from morn to dewy eve in the lecture-hall or the library of my inn, and, as soon as the shades of night are falling fast, in returning to my domicilium at Ladbroke Grove with the undeviating punctuality of a tick?”

Also Read: The Colonial Eye: As The British Saw And Described Indians