The Colonial Eye: When Britain’s Middle Class Came To India To Find Opportunity, Status, And Love 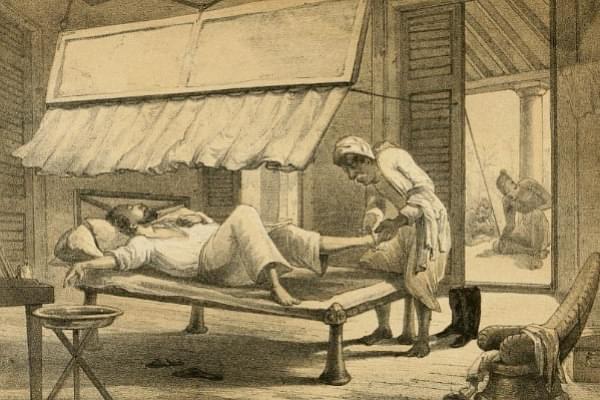 Curry and Rice: The Ingredients of Social Life at “Our” Station in India by Captain G F Atkinson (1860) (Public domain)

Contemporary conversations about immigration focus on Asians, Arabs, Africans, and Central Americans trying to gain entry into Europe and North America. Resentment towards immigrants is rife and palpable. A seemingly unending stream of brown and black immigrants threatens to overwhelm the West, further adding to its enduring and long-standing “burden”.

This one-way stream has purportedly always headed westward. However, this is simply not the case. Only until a 100 years ago, it was the middle and working class of Europe (and not just highly ranked colonial elites) that went in millions to find opportunities in the colonies in Asia, Africa, and Latin America.

Nineteenth-century working-class families in Britain were large – typically six to 10 children per family. Without an elite education or money and few connections, many young men from such families turned to India. Staff positions and combat duties with the East India Company, or later with the British colonial government, were a surefire way to move up in the world. In India, they would find not only careers with pensions (and subsequently wives), but also rare fortunes. Some returning Englishmen who had become conspicuously wealthy in India, flush with gems “from Golconda mines,” were nicknamed the new Nabobs. So great was the wealth that some acquired, they were able to buy titles, land, and even seats in the English Parliament with their new money.

But while today’s immigrants to the West lose social capital upon immigrating, starting over at the bottom despite qualifications, and taking jobs that locals don’t want, English emigres to India found their status instantly elevated. With or without patronage from home, merely setting foot on India-bound steamships was enough to transform cadets into colonels and captains to lieutenants. Embraced upon arrival by the Anglo-Indian network in India that helped in finding jobs and housing in comfortable “stations,” even young newbies (“griffins”) experienced life almost immediately as “burra sahibs.”

Today’s immigrants to the West are expected to cheerfully accept long periods of “paying dues.” The change in lifestyle for English opportunity seekers was somewhat different. They found firsthand that India was indeed a country where “servants are as thick as bees.” Waited on and pampered by servants, Englishmen in India exulted in the availability of servants galore – khidmatgars, sircars, punkahwallahs, dhobis, durzis, ayahs, bawarchis, and even bearers whose sole task it was to pull up one’s stockings. One for literally every need, indeed.

Assimilation was neither required nor expected. For the hardship of being in India, albeit voluntary, all kinds of oriental delights – tiger hunts, portrait sittings, “nautch girl” entertainment, and elephant rides – were provided. Homesickness was alleviated by regular rounds of parties, balls, concerts, and banquets. Local commissariats arranged for supplies of goodies like “beer, wine, tobacco, sugar, pepper and snuff.” Watering holes – public baths – offered relief from the “oppressiveness” of the “tumultuous crowds” and when the longing for home became too much to bear, a local band could easily be rounded up to strike up the dear and familiar notes of “God save the Queen.”

Women, too, turned to India with immigrant dreams. Many travelled alone to find husbands among the British soldiers, clerks, and administrators there. To an adventurous woman, born on the wrong side of England’s class-conscious society, an up and coming husband in India promised a lifestyle of recreation that only the uppermost echelons of English society could experience. A set of verses written in the 1800s by Thomas Hood in the poem I’m Going to Bombay describes the hopefulness and excitement of one such young woman headed to Bombay.

By Pa and Ma I'm daily told; To marry now's my time,

For though I'm very far from old, I'm rather in my prime.

They say while we have any sun; We ought to make our hay -

And India has so hot a one, I'm going to Bombay!

My cousin writes from Hyderapot; My only chance to snatch (...)

And says the climate is so hot, It's sure to light a match,

She says that I shall much enjoy, I don't know what she means,

To take the air and buy some toy, In my own palankeens.

I like to drive my pony-chair, Or ride our dapple gray

But elephants are horses there, I'm going to Bombay!

Pleasure-seeking though they might have been, these women probably experienced most acutely the bittersweet realisation that dawns on all immigrants: that the compensations of a new life usually come with hazards. For the English, these were isolation from families, unforgiving heat, the back-and-forth between English habits and Indian ones, and social lives entirely restricted to other Britons.

And, perhaps, it was this self-imposed psychic distance from Indians, who they interacted with only as their subjects or help, that resulted in few English staying back in India and making it a permanent home. When at last the Raj wrapped up, after 250 years, and the colonial benefits had ended, virtually every “adventurous” Englishman, no matter how seemingly infatuated with India, threw in the towel, packed up, and went “home.”

Pictures – Curry and Rice: The Ingredients of Social Life at “Our” Station in India by Captain G F Atkinson (1860) (Public domain)