Violence Against Women Is Not Just A Social Malaise— It’s Also About The Economy, Stupid 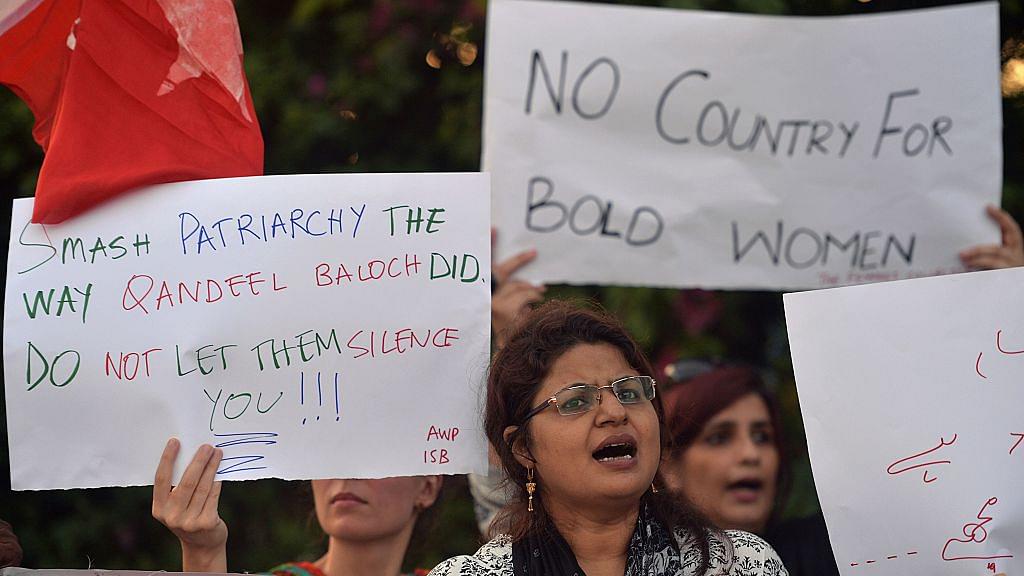 Pakistani civil society activists carry placards during a protest in Islamabad against the murder of Baloch. Photo credit: AAMIR QURESHI/AFP/GettyImages

Qandeel Baloch was a woman with many names. Born as Fauzia Azeem, she was more famously known either through her assumed pseudonym, Qandeel Baloch or through some seemly sobriquets such as—“Pakistan’s Kim Kardashian” or “Pakistani Poonam Pandey”.

If you are still having trouble remembering who she was, let me refresh your memory and take you back to March 2016 to the solemn eve of the T20 World Cup — the site for the India versus Pakistan cricket match, when the bold Baloch promised to strip dance for Pakistan in return for a victory that unfortunately was not to come. As a result, her clothes stayed put but she had managed to catch the imagination (pun intended) of an entire sub-continent, which somehow and somewhere has a role to play in her untimely death.

Baloch was strangled to death in Multan by her brother who did not like the “kind of pictures she had been posting online”. The brother was arrested and has confessed to the murder.

Now let’s spare a moment in the name of introspection and honesty. And here’s my version of my unadulterated truth:

My emotions, to be completely honest, have been oscillating furiously ever since her death. I honestly had no idea who she was (nor do I care for some of her posts and videos that I have seen since her death, especially the one concerning our Honourable Prime Minister) but when I read that she had been “honour-killed” over her risqué social media posts, something inside me snapped.

Another woman… another karokari… (Karokari is a Sindhi term colloquially used in Pakistan for “honour killing”, where a woman — who is assumed to have “blackened” the family name — is brutally murdered at the hands of a male member or members of the immediate or extended family.) Honour killing is basically an extreme form of gender-based violence and as such is not a problem that is unique to our neighbour in question.

But what is the correlation between women and honour that makes relatives go on a roaring rampage of revenge and retribution? The answer lies in gender socialisation or the norms set by society on a woman’s “code of conduct”. In other words, this epidemic plagues all communities that believe that honour resides in a woman’s netherlands (Please pardon me, all ye of the Netherlands, for this was the most polite term I could borrow in order to refer to a certain part of the female anatomy. You see, as a woman, I am expected to be polite in speech and must absolutely abstain from using certain terms and terminologies for certain male/female anatomies… and while I may be fairly notorious for my usual devil-may-care attitude — sorry trolls, today’s not that day.)

Which brings me back to the point I was raising: Violence-Against-Women (or VAW, in short).

VAW remains a growing concern for one and all… a concept that cuts across caste, colour and creed. In fact, according to the World Bank (1994), out of 10 selected causes and risk factors for disability and death among women between the ages of 15 and 44, rape and domestic violence rate higher than cancer, motor vehicle accidents, war and malaria.

Of course, in case, you are a man reading this, wondering why this article or the death of Qandeel Baloch should concern you (as it should), let me simply state that VAW is not just a woman’s problem. It has huge socio-economic ramifications that also come with multiple and far-reaching consequences, which not only manifest in the short term but also has a far-reaching inter-generational effect. Which means — it’s everyone’s problem.

Even though the United Nations accorded explicit recognition to violence against women as a human rights concern and established the Special Rapporteur on Violence Against Women (SRVAW) to study both its causes and consequences, the truth is that we have achieved very little very late. The solution still eludes us and I truly believe that emanates from the fact that we have not yet enlisted the help of our menfolk, who form the other half of the human population. And today, I’m hoping to find some converts!

How? Simple: Through the power of hard-core facts and mathematical numbers.

According to UN Women, the annual costs of intimate partner violence (also refer “Let’s Tie Cinderella Up”, Swarajya, March 2015) is pegged at $5.8 billion in the US and $1.16 billion in Canada. In Australia, violence against women and children costs an estimated $11.38 billion per year. Domestic violence alone cost approximately $32.9 billion in England and Wales.

In order to ascertain the economic costs associated with domestic violence on a global level, a study was undertaken in 2014 by James Fearon of Stanford University and Anke Hoeffler of Oxford University. The study said what should have been said a long time ago: “Domestic violence is more costly than wars, civil unrest, and terrorism.”

In an interview to The Guardian, Hoeffler said: “Wars are only one form of violence and are very costly, but other forms are even more costly and don’t get much attention… There has been an over-concentration on the consequences of political violence and not enough on domestic violence.” To be honest, what Hoeffler said was nothing new. Most people continue to choose to ignore the elephant in the room. Or maybe, we need a new metaphorical idiom… oh wait, I got it: “They are busy ignoring the abused cow in the room.” There now, there are my Hindu feminist roots again.

Of course, to understand the profound impact of the economics of domestic violence, we need to analyse this sweeping and thought-provoking statement in dollar terms, that is: What does a war cost vis-a-vis homicides vis-a-vis domestic violence?

The numbers are bound to shock you. While the costs of recent civil wars come at a hefty price tag of $170 billion annually, homicides come with an annual billing of $650 billion. And if we now look at the annual cost of domestic violence across the world, it costs the world a whopping $9.5 trillion. That’s right. $9.5 trillion. That’s half the annual GDP of the US. Now that should give all of us plenty to think about.

And if the men reading this are still wondering why they should care, let me ask them a simple question: “Where do you think this money comes from?” or “Whose money is it?” And while you ponder the question, remember this, that women form only a minuscule percentage of the global workforce.

If there was ever a time for economists to come forward and tell the world the amount of money it loses  (both through direct and indirect costs) when it ill-treats half its species, the time is now. May be then, the world will care that a Qandeel Baloch was killed for XYZ reasons, and what her murder cost the world.

And in the meantime, all those murder-happy men out there who are dying to kill the woman who dared defile and dishonour their family name, it’s time you remembered: “Her body is not your honour bank!”